Dark desires flourish in the glittering City of Angels... 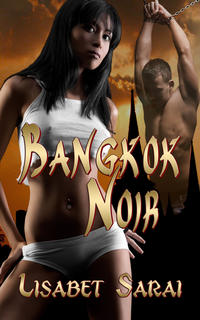 Diana Fanning, aka the Professor, runs The Academy, the only genuine BDSM bar in Bangkok. She's the first person police colonel Apichat Weeranwongsakul consults when a bar girl turns up brutally murdered, tightly bound, with clamped nipples and every orifice stuffed with sex toys. The colonel figures the killer might be one of her customers. But he has his own secrets. He needs Diana to satisfy his shameful dreams of being beaten and abused. Meanwhile, a mysterious American named Sam stalks Nok, the lovely natural dominant who is the Professor's star performer. Nok is used to being the one in charge. She can't understand why she craves the discipline Sam administers.

I picked up the little whip that Ajarn gave me to use in my act and swirled the thongs lazily around above my head. Then I stuck it between my thighs and rubbed it back and forth. Mmm. I could smell myself, as I got more and more wet.

I checked my audience. Everyone was watching me. I chose first one man, then another. I stared at each one until he was too embarrassed and lowered his head. I didn 't smile, just stared. Letting them know with my eyes that I was in charge. The boss lady.

At the end of the row of benches, I noticed somebody new. A handsome farang with hair the color of straw, wearing business clothes that looked expensive. He smiled at me, a strange smile that made me feel like I was naked.

Of course, my costume doesn't hide very much. Normally, that gives me a feeling of power. Maybe I will allow them to see the hidden parts. Maybe not.

With this man, it didn't matter what I was wearing. I felt like he could see right through my clothing. Like he could see every bit of me, even if I wore street clothes. My nipples started to ache, and my G-string got more slippery than ever.

For the first time since I started working for Ajarn, I was nervous. I stumbled on my spiky heels. I almost lost my balance. Luckily, I was able to turn the mistake into a sexy dip that showed off my bare rear. Most of the customers didn't notice.

The blond man was not fooled.

My heart was beating so hard that it hurt. When I finished my dancing time, I ran into the toilet and splashed some water on my face. I crouched down, my back against the wall, listening to the chatter of the other girls. My eyes closed, I tried to follow my breathing, the way the monks taught me. All I could see was the farang looking at me, with that X-ray stare of his, like something from a science fiction movie.

I stayed in the bathroom for as long as I could. I knew Ajarn would notice if I was gone too long. Finally, I had to go back out. I peeked out from behind the curtains, trying to see if he was still there. When I saw that his seat was empty, I sighed with relief.

I headed toward the bar to get a Coke. My throat was tight and dry. Then I felt a hand on my arm. It was him. His skin was so cool, it made me shiver.

"Can I buy you a drink?" he asked. His voice was kind, and made me think of music. Still, I felt something like terror. He stared at me without blinking. Now it was me who had to look away.

Ajarn was on the other side of the room, watching us. I couldn't refuse.

"Thank you, sir. Just a moment. I go get a Coke, come back right away."

"Let me go with you," he said smoothly. He took my arm and walked me to the bar. After we got our drinks, he guided me to a table in the corner.

His smile made me feel like I had eaten a meal of live butterflies. "Same to you. What's your name?"

"My name Nok. What your name?"

I nodded. He brushed my long hair off my shoulders and down my back. Then he took my chin in his hand. He raised my eyes to meet his again. I felt like I was captured. Trapped.

"Very appropriate. You're as delicate and airy as a sparrow."

I thought of those caged birds they sell at the temples. You set the birds free to make merit, but they always return to their masters.

Without warning, he kissed me. His lips were as soft as his voice, at least at first. I thought I should stop him, though. I tried to pull away. His right hand held my mouth against his. His left arm wrapped around my waist. I couldn't move.

So I gave up. I let him slide his tongue into my mouth and suck the breath from me. The funny thing was, as soon as I gave in to him, I began to like it. He smelled like soap and expensive cologne. He tasted like his whiskey. I could feel that he was strong, much stronger than he looked, with his slim body and fancy clothes.
He kissed me harder, biting my lip. I felt like I was melting. He let go of my chin and played with my breasts through the stretchy mesh. My sex was on fire against the hot, sticky leather.

Suddenly, he pinched one of my nipples, digging in his fingernails. His mouth smothered my cry of surprise and pain. After the pain, though, I felt amazing pleasure, shooting up my spine like lightning.

"You like that, Nok." My English is only so-so, but I could tell he wasn't asking a question. He was telling me. And he was right.

I was terribly embarrassed. I wanted him to do it again.

He bent me backwards. My hair nearly brushed the floor. He put his mouth on the other nipple and sucked. I felt like his mouth was between my legs, sucking me there. It was heaven. I reached up, wanting to stroke him, but he pushed my hands away.

Then, when I was not expecting it, he sank his teeth into my flesh. Everything went dark for an instant. Then pain exploded in me, brilliant as the sun. I was burning up, but I wanted to burn.

When I opened my eyes, he was watching me. That strange smile was on his face, but he also looked worried. "That's enough for tonight, Nok," he murmured. "I have an appointment elsewhere. But I will come back for you, soon."

I was too dazed to say anything. He stuffed a thousand baht note into the cup with the bill, to cover two one hundred baht drinks, and stood to leave. I grabbed his shirt. Not thinking, but not wanting him to go.

He flicked his thumb across one of my aching nipples. Delicious echoes of pain rippled through me. "Be patient, Nok. Be patient and wait. Now is not your time."

Before I could say or do anything more, he was gone. I sat on the stool, confused. Ashamed. Frustrated. Sticky and dirty and smelling like a whorehouse. I buried my face in my hands, almost ready to cry.

Someone tapped me on the shoulder. "Your turn to dance again," said Lin. I nodded and stood up. I was still shaking.

"Who was that guy?" she asked. She knew that something was wrong with me.

"Just a guy," I said. I made myself sound uninterested. "Just a customer."

I paid my respects to the shrine in the corner, then climbed back onto the pedestal. I began to dance, showing off my whip to customers. Trying to look like I was in control.


Get your hands on this dark, sexy novella today!

Wow, this sounds like a very interesting and unusual book, can't wait to read it!

Very very interesting... liking what you have shared!
greenshamrock AT cox DOT net