A Skeleton at Her Door

Thanks, Lisabet, for inviting me to be your guest again. It's great to be here again with you and your friends.

October is the fall season for most of us in the northern hemisphere. That means cooler nights and cooler days. It's a time for the leaves to turn red, yellow, and orange. Now, if you'd like an explanation of how the color is in those leaves even when they are green, I'd be more than willing to don my botany cap and explain it sometime. But I'd much rather talk about one particular holiday - Halloween.

It's really not a USA holiday, as its roots trace back to Samhain and other pagan festivities, which were then turned into a Christian holiday to honor the dead and to celebrate the Saints. Anyway, this jumbled heritage got tossed in our American melting pot, and by the 1920's people began to celebrate it. The result is today's Halloween with costumes, trick or treat, and carved pumpkins amongst pretty fall decorations.

It's actually my favorite holiday. I love the colors of fall and I love pumpkins. I love decorating the porch, front door, and my mantels with gourds, pumpkins, fall berries, corn, and other fun things. I'm also a sucker for a bowl of candy corn. As the holiday approaches it's fun to tuck in a witch's hat, some plastic black spiders, or an adorable skeleton.

They say to write what you know. I did. Many years ago, I was involved in a community Halloween party with a haunted woods for the older kids, and a clubhouse party for the younger ones. We had a community member who was part of a little theater and had access to all sorts of things including a woman who was more than willing to donate her skills as a makeup artist. Put a handful of creative adults together and we had a haunted woods that was totally awesome.

I knew my single male neighbor was going to a big fundraiser where they auction off the Halloween costumed guys for dinner. It was growing in popularity and a financial success. Who wouldn't want a dinner date with Spiderman, Zorro, or Count Dracula? Well publicized, it took place a few days before Halloween. Considering I was married to Prince Charming and didn't have a lot of extra money, the fundraiser was the least of my concerns. I only knew that my neighbor Roger intended to be part of the haunted woods with the same costume as he was using for the fundraiser.

About three days before Halloween my doorbell rang. Like an idiot I opened the door without even looking to see who it was. There stood this incredible skeleton. My mouth fell open. I knew this makeup artist was trying things ahead of time so I figured Roger used her before his big fundraiser dinner. I swear it was bitter cold, so I dragged him in, and called up the stairs for my girls to come see him. The guy was not talking. I'm walking around him. I'm admiring his…ah-hem…costume. Really. The costume. His shoulders were this wide, and his butt was this little, and his… There are no bones in certain places. He was ripped! He had the leg muscles of a skier. The arms of a…Oh, yeah. It was the costume I was admiring, definitely the costume! It glowed in the dark. It covered his body, feet, hands, and head, except for his face. That was carefully painted.

Really, it was the costume. I'd never seen one like it before or since. It fit the man like something worn by an Olympic speed skater. Unfortunately, all I'd even seen my neighbor in was a suit and tie. So I assumed… Until one of my girls said, "Mom, Roger has brown and this guy's eyes are blue."

"You're not Roger?" My heart fell into my stomach. Who did I just yank into my house?

That incident became the opening of A Skeleton at Her Door. What if? What if the woman who opened the door to a skeleton was divorced with an ex-husband who was abusive? What if the skeleton was a really nice guy who's been burned by enough women that he's lost faith in ever finding a woman who could be faithful?

I write sweet romances and I write what I call sensual romances where I don't close the bedroom door, but if your fourteen year old reads it you won't have to explain a thing, although I wouldn't consider it suggested teen reading. I write for adults. A Skeleton at Her Door is a sensual romance. It's about trusting, putting the past away, and finding love when it's least expected. It's also about blending two households, parenting, three children, and sneaking off for some adult time.

Just for fun, if you email me at e.ayers [ at] ayersbooks.com and put "Blog" in the subject, I'll enter your name into a drawing for a free ebook of A Skeleton at Her Door.
Here's a sexy except of their first time together. 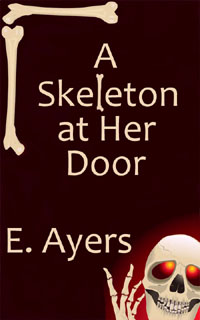 Angie looked up into Tom's light brown eyes and she knew she had to make a decision.

"The condoms are in the van."

He grinned. "I stocked this place, too. I like being prepared."

He sat her up and then pulled her to her feet. She smiled as she watched him put their glasses in the sink and check the woodstove one last time. He picked up the single oil lamp and took it with him to the small bedroom.

"The bathroom's there." He grinned. "There's a light switch in there."

When she came out, he had turned down the covers and was waiting for her.

"If you change your mind, tell me," he whispered in her ear. "We'll take this slowly."

She nodded as he slipped her sweater off. His fingers trailed across the top of her shoulders and then followed the outline of her camisole to her cleavage. She inhaled. Excitement ripped through her and with it a mild feeling of dread. He unbuttoned his shirt and then pulled off the tee he had under it. There was a small narrow diamond shaped patch of hair on his chest. She reached out and ran her fingers through it. He dropped his pants.

Cotton knit undies covered him but didn't disguise what was under them. He was gorgeous. Most twenty year old males didn't look as good.

"You don't look quite as bony," she said in a low voice.

He chuckled as he dropped her slacks and caressed her legs. "And you look lovely."

She chewed at her lower lip as he started to lift her camisole off.

"You're okay with what we're doing?" he asked.

Now, her back was to him, and his fingers were on her bra hooks. Obviously he had taken that as a sign to remove her bra. It fell to the floor. His hands were on her waist traveling slowly to her breasts. She inhaled and held the breath as heat traveled through her.

He pulled her back against his chest and she exhaled. The room was chilly and he was warm. He let go of her and she could tell he was removing his undies. Hers followed and then he pulled her against him again. His hand moved her hair from her neck and his lips caressed her nape. Then she felt his thumb tracing the scar on her shoulder.

His hands traveled from her shoulders to her breasts and then lower. She forgot how to breathe.

He lifted her arms over her head and began to nibble from her elbow to her underarm and then around to a breast. She heard an odd buzz and then heard him sigh. "It's the house."

He left her and reached for his pants. He opened the mobile phone connection. "Hello."

"Yes. She's with me." A slight chuckle erupted. "I'm your father. Don't ask me those questions. Go to bed." He closed the phone and put it next to the bed. "That was Emily. Lissy's asleep on the sofa."

She nodded and watched his eyes. His gaze traveled over her body. Suddenly, she felt ashamed of her nudity and she wanted to hide. Instead, she gulped.

He drew her back into his arms. His lips covered hers, parting them. Gentle and tender, yet demanding and full of want, his actions were of a man who hungered for her. Her own feelings of lust overrode her panic and fear. One hand was on her back and the other on her bottom. He held her tight to him as his mouth devoured hers. Heat pulsed through her and pooled between her legs. Sexy and lovingly, he swept her off her feet, carried her to his bed, and pulled the covers over her. Her body warmed in anticipation.

He turned the lamp down until it went out and then climbed in next to her. His embrace tangled their bodies all the way to her feet. She didn't feel pinned, instead she felt liberated. She wanted to be with him and feel his arms and legs intertwined with hers.

"You haven't told me what you want me to do, what you like, or what feels good." His breath fluttered over her skin.

Her eyes were now adjusted to the almost pitch darkness. "I want to touch you the way you've touched me." She ran her fingers through his hair and then down over his cheek.
"Then I want you to make love to me. I want to be loved." 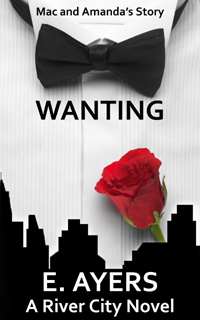 Oct 10 through Oct 11, E. Ayers' book Wanting (A River City Novel) is available for free on Amazon. It's the first book in the River City series. It's a sensual, contemporary, full-length novel with mainstream elements.

Businessman Mac McGuire fell head over heels in love with Amanda Conner. His money has always gotten him what he wanted, but not this time. He's trying to rescue her from the poverty and violence of River City's housing projects and pull her into his glamorous world of downtown high-rises and opulence. Mac is used to risking everything and winning, but he realizes that wanting Amanda could cost him everything. Is that a price he's willing to pay?

You can find my books at your favorite online bookstores!

A Skeleton at Her A  Door
Amazon
B & N
iTunes

Email ThisBlogThis!Share to TwitterShare to FacebookShare to Pinterest
Labels: A Skeleton at Her Door, E. Ayers, giveaway, River City, Wanting

I love this story! Sweet and relevant. Second chances at happiness are often better than the first.
:)
Rose

Thanks, Rose. I'm so glad you enjoyed it. It was fun to write it. Being single and a parent is darn hard. Finding love after divorce and having children makes for complications.
E.

I started reading Wanting and have totally fallen in love with the contemporary, realistic read. I love that E. Ayers is so willing to take up a challenge and can't wait to read A Skeleton at her Door

I love the story line. What an exciting book for a halloween gift and for me.

Thanks, Renee, for the compliment. You made my whole day!

Thanks so much for stopping by. I do love fall and snuggling under a blanket with a handsome hunk is so much fun!

Fall is my favorite time of year, too. Thanks for sharing your story. I'm off to download Wanting.