If You Could Be a Super-Hero...

I've always wanted a secret *super* power. Very often this was because I saw it as a way to escape, or to understand, the situation I was in. How often have I wished I could control time, or be invisible.

My favourite comic superhero has got to be a combination of Spiderman crossed with Professor X. I'm not sure which of the latex wearing superheroes I would want to be if I have to select one, but I know for certain I don't want to be the Hulk (I just can't see the positives in his story!).

I love the idea of knowing things other people don't - maybe the power to see inside another person's thoughts or control those thoughts. I'd also like to be invisible and have freaky powers over technology. Oh, and fly, I'd quite like to be able to fly.

I have always been fascinated by the Greek and Roman myths and their Gods and Goddesses and the earliest kinds of superheroes. I have a favourite, Apollo, the sun God. I have to admit this is based on a combination of his back story and my unrequited love for Apollo from Battlestar Galactica (original version!)).

The first superheroes were a fascinating bunch of beautiful godlike men and strong Amazonian women. Their stories were dictated by the whims of a God and of fate. My favourite ancient story is of the Three Fates who sit up there watching us all deciding how long the thread of our life is, and when to cut that thread. It's intriguing to think that there is a trio of women somewhere who decide our destinies and the visceral idea of a pair of shears literally slicing your thread of life is creepy and very final.

I also love the stories about Troy, Jason, the Minotaur and so many others. I was brought up on the old Ray Harryhausen stop-motion films like Jason and the Argonauts, Clash of the Titans and The 7th Voyage of Sinbad and loved the hero at the center of it all. The hero had Olympian-God-given talents and items were often sneaked to them by the capricious Gods that would help them win against the varied and amazing bad guys. And my love of Greek and Roman stories lives on. Every time a Harryhausen film pops up on the TV (normally in the slow week between Christmas and New Year) I sit and watch every second with absolute fascination.

When I 'created' Alex in Oracle he knew he had special talents. He never questioned why he had them; he could escape the bullies from his childhood and he felt powerful. He was a man who had no understanding of what he was or how he came to be like it. Then I gave Alex his Luke. Because every hero needs someone to ground them and explain to them what the hell is going on. I imagine if I was suddenly given the ability to read people's minds I wouldn’t automatically go "hey, I can read people's minds". Knowing me I would analyse why, and approach the gift with trepidation and more than a little fear. I would need a Luke just to calm me down. 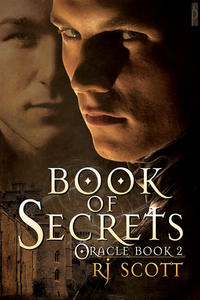 In Oracle 1, Alex couldn’t fly, but I certainly gave him powers including a certain kind of mind control, the ability to *disappear* and the power to affect technology. In Oracle 2 things go from bad to worse for poor Alex but with great power comes a backstory. Alex's backstory is a little different to the normal but no less compelling than being the only survivor of a dying planet!

Hero's don’t have to save the earth or bring peace between ancient gods. They can be a carer, or a teacher, or a first responder, a soldier… But, if you were given one superpower, one gift or curse, what would it be?

Oracle 2 is out today and is available here:
https://spsilverpublishing.com/product_book_info/products_id/1325/

A list of all my published books is here: http://rjscottauthor.blogspot.co.uk/p/published-writing.html

About me...I live in the UK just outside London and most of my written work is published with Silver Publishing. I love reading anything from thrillers to sci-fi to horror; however, my first real love will always be the world of romance. My goal is to write stories with a heart of romance, a troubled road to reach happiness, and more than a hint of happily ever after.

My website is here – www.rjscott.co.uk and my facebook is here: https://www.facebook.com/author.rjscott. I love hearing from readers and my email is rj - at - rjscott.co.uk

Greetings, RJ, and welcome to Beyond Romance.

My super power of choice would definitely be the ability to fly. Sometimes I dream that I can fly - it's intoxicating.

I definitely would NOT want to be able to read minds. Blissful ignorance is far safer!

Congratulations on the new release.

Thank you for hosting me Lisabet... I dream I can run which is something I don't do in real life...

Mmh, superpowers - who wouldn't want them? I'd love to be able to shape shift, which is funny seeing as I'm not into shifter stories at all, but imagine you could be anyone - or anything - you like. Fascinating!
Anyway, your book sounds intriguing, RJ. Congrats on the new release!

All three of my children are diehard Superman fans but I was a Wonder Woman fan. Besides that cool transparent airplane she had, she also possessed the golden lasso that when wrapped around another made it impossible for them to lie. Although, I agree with Lisabet, I wouldn't wish to know everything that is in another person's mind, I would like the power to know if I'm being told the truth.

Congratulations on the new release R.J. I think we all could use a Luke.

Great post, RJ. I am now thinking about what kind of superhero i would like to be. Having six planets in Libra, that idea of standing up for justice does appeal to me. The book sounds wonderful. : )