Whisper of a Witch 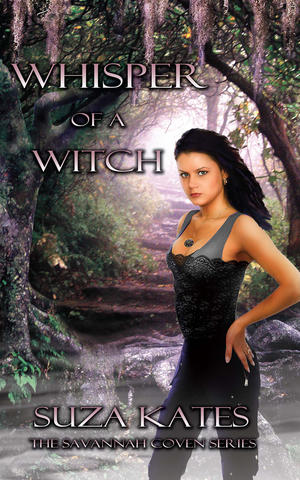 Biologist Shauni Miller, a beautiful as she is compassionate, harbors a secret that could alter her life forever. If she chooses to share it. Dr. Michael Black helps Shauni in her time of need, but sees more in the raven-haired temptress than she ever meant to reveal. He knows she’s hiding something, but then, so is he. Both Shauni and Michael have a role to play and decisions to make as a centuries-old prophecy has yet to be fulfilled. Only the fates know if they are meant to be together. Or if one of them has to die.

“Oh, no you don’t,” she said with a shake of her finger. “I’m not being derailed again.”

“What?” His gaze lingered on her shoulders and the curve of her neck. He wasn’t halfway finished with her, yet. “Yeah. You were going to tell me something.”

“Now you’re catching on. And you were going to tell me how you found me out in those woods.” She looked at the large, golden lump of dog snoring in the foyer. “And don’t tell me it was all him.”

Michael felt his previous mellow aura zipping up tight. She’d relaxed him to the point of pre-catatonia then after one look at her, he’d been aroused again and gunning for round two.

Now he felt neither level of satisfaction. He was back to agonizing over how she would react to his dirty little secret. Hell, she might consider it a breach of privacy, the way he perceived what people were feeling, especially his ability to tune in to her so well. It was like he had a direct line to channel Shauni. All day. All night.

So he did what any fearless man would do. “You go first.” 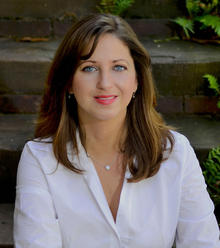 Suza Kates can’t remember a time when she didn’t love books, but two particular memories stay with her. “As a young girl I picked up Little Women, read it straight through, and promptly turned to page one to start all over again. The next book I did that with was Mind Hunter by John Douglas, tales about profiling serial killers.”

Thus a twisted romantic was born.

Throughout her teenage and young adult years, she read everything from horror to historical romance yet never imagined writing anything of her own.

It was during a long, cold winter in a tiny apartment in Germany that Suza picked up a pen and notebook to entertain herself. “The apartment was so tiny, my bed also served as my living room couch. Plus, I shared it with three cats.”

Missing the warmth, the hospitality, and the food of the South, she wrote about those things with a huge dose of family thrown in. She says she still has a sweet spot in her heart for her first book, Southern Moon, but to date, she hasn’t revisited it for submission to her publisher.

Suza followed her heart to Savannah, Georgia, and it was the gorgeous city with its moss-covered oaks and secrets of history that inspired her to consider paranormal romance. “I had an idea about sisters and magic, so I went to work on the first book of The Savannah Coven Series, Whisper of a Witch. The series is still going strong, and I am grateful every day that I took a chance on paranormal romance, a genre I wasn’t very familiar with and had never actually read before writing it.”

Suza has since joined RWA and can’t say enough about this organization. “The education and support are unparalleled. I am so grateful to all of my fellow writers who have offered advice.”

Suza still resides in Savannah and is currently working on her next book. She considers it a perfect day when she can sit at the keyboard with coffee in her cup and one of her cats purring in her lap.

Hard to deal with the harsh reality of fate sometimes. I hope theirs is OK.
debby236 at gmail dot com

Loved the blurb, Suza. I hope you do revisit and submit, your first book Southern Moon. Just think how much better it will be now with all the experience you've gathered since you first penned it. Congratulations on the new release!

Beyond Romance,
So glad you're taking part in the tour, and thanks!

The plus side is each trial comes with a new love attached. : )

H.K,
It's a possibility! If I can get caught up on the project list. : ) Thanks for visiting and good luck in the giveaway!

Thanks for sharing this! The cover is so pretty.

Thanks Chrysrawr! (Wish I could take credit) ; ) A talented guy named Brian McCan does the Savannah Coven Series covers.

Thanks for sharing the excerpt.

I love the intelligient biologist as the leading lady. Thanks for sharing the excerpt

I enjoyed the post and reading your bio, thank you.
Kit3247(at)aol(dot)com