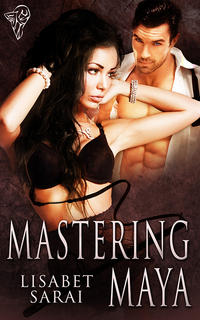 Behind the mask of control hides a spirit aching to surrender.

Mistress Maya bears the nickname 'The Ice Queen'. Her precision in administering discipline, her skill in evoking a submissive's devotion, and her unshakable self-control are legendary in the small but active Boston kink community.

From the moment newcomer Master Shark sees Maya flogging a sub at Club Inferno, he's obsessed with her beauty and power. He'd determined to break through her defenses and bring her the same release she grants to the lucky slaves she tops. When Maya dismisses Shark as young and inexperienced, he offers her a challenge: a night together, during which he'll show her what it means to be mastered. If he fails to bring her to new heights of sensation, he agrees to become her slave.

Calm. Calm. She flashed back to the pinnacles of ice for an instant. Then she accepted the new Dom’s outstretched hand. “Master Shark?” Her eyebrows arched and she allowed a hint of laughter into her voice.

“A pleasure. Welcome to Club Inferno.”

“Please, call me Stephen.” He kept hold of her hand several seconds longer than protocol demanded. She noted that he stood only a few inches taller than she, that he smelled of female musk and cured leather, and that he was somewhat older than she’d guessed from a distance—closer to thirty than twenty. “I’m only Shark to my subs.”

“I can see how you earned the name.” Maya gestured toward the schoolroom door, where clots of Doms and subs were now emerging. “You’re as voracious and implacable as your namesake.” Her hand still tingled from his grip. She ignored the sensation.

“I’ll take that as a compliment.” The stranger chuckled. “You’re no fount of mercy yourself—if I may say so.” He raked her with his eyes, deliberately assessing her physical charms. Maya kept her face impassive, even as her pussy moistened. “Your caning—well, it was magnificent!”

Genuine admiration rang in his voice, though his bold stare suggested there were limits to his respect.

“Long years of training, Master Shark—as well as skilled teachers.” She skewered him with what she hoped was an intimidating look. “And who taught you, young man?” The emphasis on ‘young’ was subtle but unmistakeable. “Where are you from?”

“San Francisco. I studied with Mistress Sylvia and Master Blade.”

“Ah, I know them well.” That partially explained his expertise. Sylvia and Blade both enjoyed stellar reputations in the kink community. “Though I haven’t played on the West Coast for many years.”

“I’m sure I would have noticed you if you had.” He looked as though he wanted to say more, but Maya cut him short.

“Nice to meet you, Stephen. But I’ve got to get home.”

The suggestion was so unexpected that Maya, at first, barely noticed its rudeness.

“What? What do you mean?” Even she recognised the shock in her voice.

“I’d really like to get to know you better. You fascinate me.”

His frankness unnerved her. “Sorry, but I never take anyone home with me.” Maya tilted her head in Tom’s direction. “I’m surprised Master Thomas didn’t tell you.”

“Oh, I did!” Her long-time associate grinned at his companion. “He’s just the stubborn type. Won’t take no for an answer.”

“Not a desirable trait in a dominant,” Maya observed, covering her discomfort with disapproval. “When a bottom says no, that means no.” She shook her head, edging away from the pair. “But, then, you’re still young and inexperienced.”

Shark’s arm shot out. He seized her wrist, preventing her from leaving. “I’m not that young.” The dark edge in his voice sent a scary thrill straight to her sex. “I just know what I want. And I’m used to getting it.”

Maya pulled herself to her full height. “Arrogance is an even worse liability.” She laced her voice with scorn, staring pointedly at the hand restraining her. Shark released his grip, looking somewhat chastened.

Her eyes narrowed. Was the little popinjay mocking her?

“Really, I apologise. I was totally out of line.”

“You were. I don’t know how things are in San Francisco, but here in the northeast we take SSC—Safe, Sane and Consensual—pretty seriously. And I definitely did not consent to you grabbing me.”

Even though you liked it, the imp in her head taunted. She couldn’t deny it. But she certainly wasn’t about to admit that to this cocky stranger.

“I know, I know. You’re right. Will you forgive me?” The hardness had vanished from his speech and his manner. He appeared as eager and harmless as a puppy.

“I don’t know.” She took another step backward, deeply confused by her mixed reactions. “Perhaps I should make you kneel and kiss my feet,” she added, thinking to inject some humour into the situation.

“Whatever it takes…” Stephen began to comply. Tom hauled him back to his feet.

“Really? Because I wasn’t…”

“I was teasing you, Master Shark.  I accept your apology. But I do hope you’ll work on your manners, if you’re going to be hanging around the Inferno.”

“Yes, Mistress Maya. I expect I’ll be around quite a lot.”

As she bid them goodnight, she wondered whether that was a threat or a promise.

Interested? Get your copy today and read this tale of love, trust, pleasure and pain before anyone else!