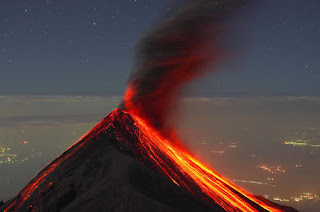 If you've read the news in the last week or so, you might have heard about the recent eruption of Volcan de Fuego (or "Volcano of Fire"), the most active volcano in Guatemala. I've always been intrigued (and a bit scared) by volcanoes. I remember visiting the Mount St. Helens museum half a dozen years after the 1980 eruption. The devastation was astonishing - humbling. The closest I've come personally to an active volcano was in Bali, where I saw plumes of smoke belching from Gunug Agung, one of the three volcanic mountains that dominate the island. (The Balinese consider them gods, and I can see why.)

Anyway, I was excited to see Volcan de Fuego in the news, because believe it or not, the mountain plays a crucial role in my paranormal novel Serpent's Kiss. At the book's climax, the forces of good and evil engage in an epic battle near the crest of the volcano, complete with fire and ash galore. I thought I might share a snippet with you - but not too much since I would rather you read the entire book LOL!

The ground lurched under her feet, throwing her down on all fours. A deafening roar welled up from the earth. Thunder answered. Lightning shot through the cloudbank, painting the grey walls a lurid white before plunging everything into blackness. I’m too late, Elena thought, her body tossed about like a rag doll by the unsteady ground. It’s already the end.

Her knees and palms stung, lacerated by the coarse surface beneath her. She opened her eyes. A cloud of sparks exploded into the night sky. Hot ash rained down on her bare arms. The earth shook itself and bellowed like a wounded beast. Red and yellow tongues flared up, hissing, silhouetting the black edge of a ridge in front of her. The air reeked of sulphur. 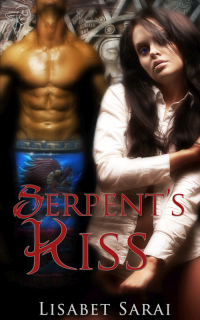 Volcán de Fuego. She had made it.

She tried to stand, but the frenzied earth kept casting her down. She finally had to crawl to the lip of the crater, ignoring the sharp pumice that abraded her skin. An explosion tore at her eardrums. Flames snapped above her head. New sparks pelted down. Burning embers landed in her hair, but were smothered by her thick mane. Blisters rose on her skin.

Warily, she peered over the raised edge into the broad, shallow bowl of the caldera.

This depression, perhaps fifty metres across, was the remnant of an old eruption that had blown off the top of the mountain. At its centre, a cinder cone belched sparks and flame from the active vent. Clouds of steam and ash swirled above the basin, stained a dirty orange by the seething fires below. The sulphurous stink clung to her nostrils.

The concave space was paved with grey pumice and black ash, interrupted by basalt boulders metres high that had been ejected in past ages. It reminded Elena of a Roman amphitheatre. Within its confines, gladiators fought to the death.

They wore their beast forms. The enormous jaguar, orange as the volcanic flames, circled the winged snake. Quetzlcoatl hovered above the ground, his wing-beats sending sparks circling around them. The were-cat’s roar of challenge echoed across the basin; the earth growled in answer. He lashed out at the serpent with a vicious paw. Even from her distant vantage point, Elena saw the claws flash.

Jorge darted out of the way. The cat’s talons sliced through smoky air. Remorros roared again, this time in frustration. Meanwhile, Jorge drew back his massive head, then struck like lightning. The jaguar tried to evade the strike, but the snake’s fangs raked a pair of deep grooves across his flank. Blood gathered in an opaque pool on the glittering black sand.

Remorros backed away, not taking his eyes off his opponent. Jorge stilled his wings and settled to the ground, awaiting the next assault. The cat limped slightly. He bent to lick at his wounds. Suddenly, he gathered himself into a crouch and launched himself into the air, toward his opponent. His jaws closed on the serpent’s throat.

Elena struggled desperately not to cry out. She knew that distracting Jorge now could be fatal. The snake did not seem badly hurt, however, perhaps due to his scaly armour. He unfolded one of his bird-limbs and ripped into the jaguar’s belly with a dagger-like talon.

Remorros bellowed in agony. Jorge shook him off and whirled away to a safer distance. His wings beat slowly as he watched his antagonist. Elena did not see any wound, but it seemed from Jorge’s tentative movements that he too was in pain.

The jaguar lay on its side, panting. Had Jorge won?As she watched, hardly daring to hope, the cat-form blurred and shrank. The naked body of Teodoro Remorros stretched out on the floor of the caldera, a gaping hole in his abdomen.

He can’t possibly survive such an injury, thought Elena, rising to her knees in order to get a better view. This must be the end. But even as she watched, the man pushed himself to a sitting position, then to a hunched stand. He placed his hands over the terrible wound - Elena could see the blood seeping between his fingers. —and he began to chant in some alien tongue.

The volcano rumbled and belched cinders. The flow of blood slowed, then stopped. Remorros stood tall. He took his hands away from his belly. The wound was gone.

Remorros’ laugh rang out in the sulphurous air. “Kulkulcan! See my power! My god-flesh is indestructible

Want more? You can purchase Serpent's Kiss from Total-E-Bound or Amazon.com.