You want to know how it will be,
Me and him, or you and me.
You both stand there, long hair flowing
Eyes alive, your minds still growing
Saying to me
"What can we do now that we both love you?"
I love you too.
I don't really see,
Why can't we go on as three?

“Triad” by David Crosbyas sung by Grace Slick of Jefferson Airplane“Crown of Creation”, 1968

I've always loved that song, especially Grace Slick's rendition. Her husky contralto voice shimmers with sensuality as she invites her two lovers to consider the possibility of a three-way relationship. I recently read that the Byrds declined to record the song because they viewed its subject, a ménage  à trois, to be too controversial. In fact, the topic of this song is beyond ménage, which to me carries the implications of a one-time encounter. This is a song about polyamory – a long-term, committed, sexual and emotional relationship involving more than two people.

Polyamory appealed to me before I ever knew the word. I grew up in the late sixties and early seventies, the era of communes and free love. I read Stranger in a Strange Land in my teens and  recognized that Valentine Michael Smith and his “water brothers” had multi-way sexual relationships without jealousy. I found the notion both intensely exciting and inherently reasonable. 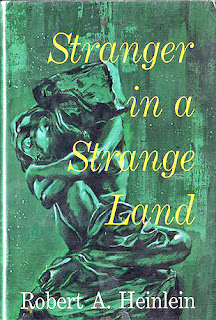 Society and the romance mythos both suggest that one can find a single individual who satisfies all one's needs: intellectual, emotional, and physical – one's “soul mate”.  This fantasy rarely proves true, many literary HEAs not withstanding. In fact, this ideal of exclusivity is responsible for the destruction of many relationships. One slip, one infidelity, is often enough to shatter a marriage. Suspicion, jealousy and possessiveness can do terrible damage even when there's no actual “other man” or “other woman”.  A polyamorous perspective recognizes that life may not be as neat as traditional romance – that you can truly love more than one person at the same time, and that in fact each relationship may provide different, but equally valuable, benefits and pleasures.

Although I've been married for over thirty years, I don't think that I am naturally monogamous. At one point in my life I was simultaneously (and openly) involved in serious relationships with three different men. I can honestly say that I loved them all. In the early years of our marriage, my husband and I actively pursued the notion of finding another woman or couple with whom we could bond emotionally as well as sexually. (We were not successful. I have a feeling that polyamory is not something you can create deliberately, that it has to evolve.) Even now, I am in close communication with several former lovers, though at this point (perhaps luckily) I live half a world away from them.

Polyamory may be reasonable, but in Western culture at least, it is anything but easy. We're conditioned to think in terms of possession, to use the terms “my” and “mine” in discussing our partners. Even more problematic is that fact that we've been brought up to believe that a person's capacities for love and for sexual attraction are finite. If my husband feels desire for another woman, does that decrease his desire for me?  If I take a lover, do I love my husband less? “Infidelity” may sometimes be triggered by dissatisfaction with one's current partner, but that's by no means always the case. A man can love both his wife and mistress, and be in agony because he feels forced to choose between them.

The ultimate source of jealousy is self-doubt. You're worried that your partner's interest in a third person is in fact a sign of your inadequacy.  You're not sexy enough, smart enough, educated enough, whatever, to hold his or her interest. A successful polyamorous relationship requires all the people involved to trust not only each other, but themselves. Each one needs to feel worthy of love.

It's a tall order, and that's one reason, I think, that polyamorous relationships are relatively rare. (The other reason is societal disapproval.)

I've written a number of stories that deal with polyamory. In Truce of Trust, Leah shares her home with two sexy men who both adore her. Ten years married to lusty, artistic Daniel, she still enjoys the discipline and release offered by Greg. But her lovers' jealousy and possessiveness have made Leah's life a hell. Truce of Trust is the story of three people struggling to overcome their insecurities in order to build a life together.


Wild About That Thing shows a polyamorous relationship at an earlier stage. Ruby loves both Zeke and Rene, and they care for her enough to consider living together and sharing her favors. In the case of this fictional triad, it helps that both men are blues musicians. This bond makes it easier for them to accept the notion that neither of them will have exclusive access to the woman they both love.

Then there's my longish short story Goldberg Variations (included in my collection Body Electric), in which cellist and exotic free spirit Deirdre becomes the lover of both remaining brothers in the renowned Goldberg String Trio. Once again, the closeness between the two men in the story helps overcome the jealousy that might otherwise have torn the relationship apart.

Posted by Lisabet Sarai at 9:19 AM

Email ThisBlogThis!Share to TwitterShare to FacebookShare to Pinterest
Labels: Goldberg Variations, M.Christian, polyamory, Stranger in a Strange Land, Truce of Trust, Wild About That Thing

WOW - what a great post, sweetie ... and thanks so much for the mention of my class!