I love me a dose of the supernatural, so Winter Howl revolves around an agoraphobic woman, Renee Chambers, who runs a no-kill dog sanctuary that also provides a haven for canine shapeshifters who want to embrace their more doglike qualities. And who better to add a little chaos to that safe little sanctuary and the young woman who clings to it than a rogue werewolf?

As the title of this post suggests, I’m a cat lady. I grew up with cats and I don’t do well without some kind of feline companionship. I probably talked to more campus cats than people during my college years (I’m working on it). And in fact I based the premise of Renee’s dog sanctuary on the Cat House on the Kings.

So why am I writing about dogs?

I’m also vampire girl – the kind that prefers vampires of the non-glittery variety. I fell in love with the (abridged) story of Dracula when I was seven or eight and immediately started looking for all the vampire stories I could get my hands on and writing vampire stories in my early double-digit and teen years. They still push all my buttons. It’s a biting and blood thing.

So why am I writing about werewolves?

I’ve got a theory about the reason we write about vampires and werewolves – and when you think about it, it’s kind of like the difference between cats and dogs. I may be wrong on this, and I welcome your thoughts. It’s just a theory.

The vampire vs. werewolf phenomenon didn’t start with Twilight or Underworld. They’ve resonated for hundreds of years as demons and monsters to fear, but fear in which you like to linger, that little thrill under the covers, the kind of thrill that you’re taught to fear but still excites you in all the right and wrong ways. I’ve always looked at the vampire vs. werewolf phenomenon as representative of one’s personality. More specifically, you choose the monster whose nature is most opposite your own.

Both creatures as they are portrayed today are representative of a desire to break free from repression, usually sexual in nature, although not exclusively so. But they do so in two very different ways.

The vampire is the solitary hunter, cold, cool, calculating. When he (or she) hunts, he is very thoughtful and patient. Seduction takes work and skill. Even when the feeding itself is frenzied and leaves behind a mess, the vampire and its cousins like the incubi/succubi, sirens, and other Seducers require more finesse to lure the prey in, often taking as much pleasure in the patience as in the feed. A vampire cultivating his prey can spend days, weeks, months, years, building up a relationship with the willing or unwilling donor, able to feed without killing if he so wishes or lulling the victim into an ecstatic, compliant state to feed in peace.

The werewolf, on the other hand, is often a member of a pack. It is the Beast, the unrestrained incarnation of the Id. Like any Beast, it feeds when it’s hungry, and it feeds upon the first thing that smells good. It, too, takes joy in the hunt, sometimes in the tracking and the stalking of the victim, but at the core of its nature, the werewolf and other Beasts run hot-blooded and impulsive. They are ruled by their hunger, their passions.

It’s my theory that if you’re being drawn to vampire fantasies, you’re feeling out of control, out of step, out of touch, as though things around you are unraveling. You want someone that’s in control of things, for a dominant personality to give you permission to yield your control to someone else, for someone else to take the reins of taking care of you … for a price, but a price many are willing to pay.

If you’re drawn to werewolf fantasies, however … call it the Jekyll/Hyde syndrome. If you’re wanting a little werewolf action, you’re probably tightly wound, a control freak, an anxious personality. You don’t want someone else to take control. You’re tired of control. You want to lose control.

So, writing about werewolves even though my heart’s with the vampires? That tells me that while I’m a more solitary, uptight person (who understandably relates well with cats), perhaps I’m craving pack. Perhaps I’m tired of schedules and discipline and an overdeveloped super ego. (What can I say? Writing’s excellent therapy.)

I know one thing – writing Winter Howl was certainly a blast, giving a similarly anxious personality type (who is very much not like me, actually, except for the anxiety) the chance to experience being pursued by a werewolf and a canine shapeshifter. And whether it makes sense to me or not, I’m still writing Beasts instead of Seducers, in Winter Howl and beyond. Go figure. Good thing Winter Howl’s the first in a trilogy. Right now, I’m luxuriating in a little bit of fur, but I predict I’ll be looking for a little fang again soon.

Here, have a glimpse of the wolf-shaped fun Renee’s going to have! 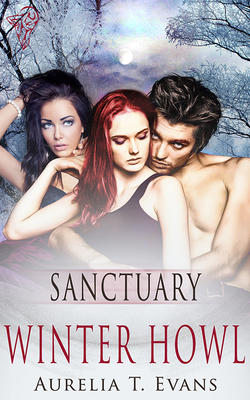 Renee Chambers, a moderate-level agoraphobe, runs a no-kill dog sanctuary that doubles as a sanctuary for canine shapeshifters. Britt, her best friend who also acts as Renee's service dog, persuades an anxious but curious Renee into a romance that has more than a little electricity. With her organization running smoothly and a girlfriend who loves her, life could be worse.

Then Grant Heath, a rogue werewolf, shows up and turns her safe, little world upside-down and inside-out with a side of out-of-control. She knows it's a terrible idea, but when she's with him, she feels different from her tightly wound, tightly controlled self - she almost feels normal. He never does anything she doesn't want, but he also doesn't care how far he pushes her beyond her agoraphobic limitations.

Renee finds herself caught between two different lovers, two different worlds. Should she stay with the shapeshifters and her sanctuary and accept being just an eccentric human being in a supernatural world? Or should she accept Grant's offer to change her and run with him as a werewolf, violent and bloody, but also fearless?

“My goals are completely self-serving,” Grant said. “But that doesn’t change the fact that they’re not good enough for you.”

“And you are.” Renee did not state it as a question, but it was understood. She turned to pick up the box and leave.

He grabbed her by the arms and spun her around so hard that she almost lost her balance. His fingers gripped the flesh to the bone, tight and a little painful. “They can’t give you what you need,” Grant said. “Because you can’t give them what they need, you’ll never get what you need.”

Renee did not even dignify his unfounded accusation with an answer. There was no way he could know what all three of them needed. He was trying to intimidate her, and he was doing a good job just with his hands. What he was saying seemed secondary. She felt the way her heart beat against her lungs before a panic attack. She felt her shoulders begin to turn inward.

“They may think they’re doing right with you,” he continued. “But they aren’t. They know you too well to give you what you need.”

God, this was just perfect timing for a panic attack. A cold sweat was surfacing on her face and palms, and she could feel her tongue become heavy. Everything around her seemed to slow down.

“No,” Grant said, getting in close so that his face filled her vision. “You aren’t going to leave. You are not going to lose yourself. Not this way. Do you understand me?”

“I need…” She needed her Xanax was what she needed, but it was just him. With the scent of dirt and sweat and hair and fur and his unusually dark blue eyes staring straight into her.

“Stop thinking.” His hands tightened even more, sending a stab of pain up and down her arms, which interrupted the progression of the panic attack a little, but she was still on the cusp of falling into something she could not get out of. Why didn’t anyone hear what was going on? Because everything seemed so loud. And there he was right in front of her. Right there.

“Stop thinking. You think too much,” Grant said. “It’s not a bad thing in moderation, but that’s what people like you do. Think entirely too much. Whatever you are thinking… just do it. Don’t think. Act. You live your life in your head, why don’t you just live…?”

She lunged forward, her arms still held tightly at her sides, and kissed him, not even bothering with preliminaries. Just taking him, tasting him, feeling the roughness of the skin around his mouth and the fullness of his lips beneath hers. Then the hot velvet of his tongue on hers as he proceeded to give as good as he got. He was good at what he did, and Renee thought that her legs were going to give way completely as all her blood rushed to the area below her belly in a dizzying wave.

His hands on her arms loosened, pulled her against him hard as one of his hands reached down to feel her ass through her jeans. He was not slow, not careful, not gentle. His teeth were almost sharp when he bit her lower lip hard enough not to draw blood but to make her cry out into his mouth. But not enough to make her pull away. If kissing Britt or Jake felt like becoming part of a whole, or filling a hole that was in her until she was full and complete… then kissing Grant was like falling, drowning, not being able to breathe with everything rushing above you, and you keep opening your mouth to gasp for air, but you only drown more.

Welcome to Beyond Romance! I'm a cat person myself.

I find your theory about vamps versus werewolves very intriguing. And Winter Howl sounds sensational!

Hi Aurelia! I loved your musings on vampires and werewolves, too. I'm not sure which I'd prefer... hmmm... Seems like a vampire's digs would probably be more comfy for an overnighter, and he'd probably have better wine -- but I'm a huge fan of Wolverine, who's got that whole raging wild animal thing going on. Very yummy food for thought. ;)

I LOVE the cover and blurb for your new novel - best of luck with "Winter Howl"!

Thanks, everyone, for welcoming me!

I like the agoraphobe angle. I'm not one, but know many who are and will be able to relate. Animals are good company when you don't want to go out in public. Great post!