My Love Affairs with Dukes

I have to think back quite a ways to remember my very first love affair with a duke, but no matter how long ago it was, I still recall that delicious sense of adventure, attraction, and…well, love. Of course it wasn’t true love because I soon replaced him with a different duke, but you know what they say about the first one.

Who was he? That would be Justin Alastair, Duke of Avon. His personality is best described by his nickname, “Satanas.” Yes, he was a rake. Aristocratic, cold, and dangerous. But like all good rakes, he could be saved by the love of a woman. The mysterious waif, Léonie (with considerable help from me) managed to bring out the duke’s softer side. (If you’re a Georgette Heyer fan, you’ve recognized by now the main characters in These Old Shades, set several years prior to the Regency period for which Ms. Heyer is best known.)

My next duke was not yet a duke but would be some day. He was rakish Dominic Alistair, Marquis of Vidal, and son of the Duke of Avon. Like his father before him, he is wild and reckless. Known as the “Devil’s cub,” he is also like his father in that he can be tamed by the right woman. However, unlike his father, Dominic possessed a certain vulnerability that especially appealed to me. I had no trouble at all abandoning his father to fall in love with him. (Dominic was, of course, the hero in Georgette Heyer’s Devil’s Cub.)

Then there was Christian Langland, Duke of Jervauix. If you’ve read Laura Kinsale’s Flowers from the Storm, you will remember this duke. Although a rake, he was also a brilliant mathematician. He suffers a stroke that robs him of his ability to communicate, and he ends up in an asylum. Again, a woman comes to the rescue. I must say that my feelings for this duke tend more toward respect than attraction, but whatever my reactions to him personally might be, I’ve definitely got his story on my keeper shelf. 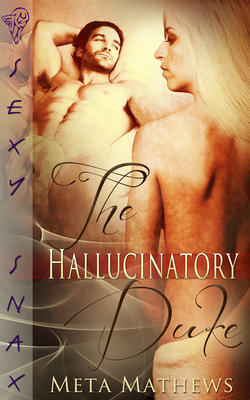 By now you’ve seen a trend. I tend to fall in love with rakish dukes, and heaven knows, there are plenty of them around these days. Almost every new Regency introduces yet another duke. I don’t try to keep up with these “johnny-come-lately” dukes. There are just too many of them, and I doubt they could replace Justin, Dominic, and Christian in my affections anyway.

Yes, I know this seems out of character for me, but the hallucinatory Duke of Durbane refused to be redeemed. Fortunately, a handsome young man, Jack Durban, (who may or may not be the duke’s descendant) comes to the rescue of the heroine, who is being sexually harassed by the duke (who disappeared under mysterious circumstances two hundred years earlier). Here’s a sample of Jack’s and Amelia’s conversation when they’re comparing their visitors from the past:

Amelia pushed her plate to one side and rested her elbows on the table. “So…you want to tell me about your visits from her?” She struggled to hide a smile when a blush sufficed Jack’s face.

“Not really. Do you want to tell me about your visits?”

“I’m almost positive my uninvited guest is the duke. He looks just like the portraits I’ve seen. And I’m wondering if your visitor could be his wife since all of our research has centered around those two.”

“That would make sense, yeah.” He shot her an evil grin. “So, are you going to share details about what happens when the duke comes calling on you?”

She bared her teeth at him. “Let’s just agree that each of us is sexually pleasured without being an active participant. Is that fair?”

He nodded. “Something like that.” His face turned a shade darker red. “I liked it, but I also hated it, if you know what I mean.”

“Oh, I know. Frankly, the duke seems to think I’m a courtesan and treats me accordingly.”

“Wait a minute. You’re telling me that this figment of your imagination—or whatever he is—actually believes you’re a hooker?”

Amelia stiffened. “Hooker is a harsh word and not one that the duke would use. But yes, he appears to think I’m in the habit of using sex for my own purposes. Also, he mentioned having had a mistress, so I think we can safely assume he is accustomed to dealing with paramours.”

“This just gets weirder and weirder.” Jack drained his beer and pushed back from the table. He stood and started pacing the small confines of Amelia’s apartment. “We need to do something before this situation gets even more bizarre. Do you have any ideas?”

“Just one, but I’m afraid you’ll think I’m crazier than ever.”

He stopped in mid-pace and stared. “If you have any sort of idea at all regarding this situation, it’s almost guaranteed to sound crazy. So what’s your solution?”

Amelia walked across the room and paused in front of him. “We need to have sex.”

His throat jumped as he suddenly swallowed. “You mean us, as in you and me?”

“How about this evening?”

“Hey, I’m not objecting, but what good is that supposed to do, other than the obvious?”

“I’m not sure, but it seems to me that it’s worth a try. After all, I’m seemingly being visited by the duke and you’re apparently being visited by Amy Pennycut, the woman he married, and their visits center around sex. It stands to reason—if there’s any reason to be found in this situation—that we’re supposed to have sex with each other.”

What’s a modern girl to do when a Regency-era duke sexually harasses her? Amelia’s no pushover, but she fears she’s in over her head, especially when a fellow who looks just like the duke shows up in her favourite diner. Is Jack a continuation of her nightmare or the answer to her prayers?
Amelia may be a historian, but that doesn't mean she welcomes nighttime visits from the Duke of Durbane, who disappeared under mysterious circumstances almost two hundred years earlier. Convinced her research is behind his unwanted attentions, she tries to quit her job, but her boss instead arranges for her to meet his nephew, who is experiencing his own troubling visitations. Although Amelia at first tries to keep Jack at a distance, she soon realises their previous experiences are so intertwined, they'll have to cooperate to solve a mystery from the past and discover what the future holds for both of them.
When Jack Durban accepted a transfer to Atlanta, he didn't expect his uncle Ben, a professor and historian, to recruit him to help research the mysterious disappearance of the Duke of Durbane two hundred years ago. Nor did he expect to start getting ghostly visits from a woman wearing a ball gown who insists on pleasuring him even when he isn't interested. When his uncle arranges for him to meet Amelia, he realises their experiences are related and that they have to find some way to placate the spirits that are harassing them before they can plan the future he’s determined to share with her.

Lady Chamberly’s Choices
A case of mistaken identity leads the Marquess of Chamberly to behave in a way he considers dishonorable. His only redemption involves marrying the young woman he wronged and then giving her the option to choose never to endure his touch again.

Bad Lady Baronton
Lady Madelina is no virginal miss, and she decides to use that fact to chase away an unwanted suitor. When she discovers he is sexually everything she ever wanted, it may be too late to tell him who she really is.

Welcome to Beyond Romance! I have to admit I've never been all that taken with dukes - though rakes is another thing altogether! The Hallucinatory Duke sounds truly creative, however.

Best of luck with the book!

Thanks so much for hosting me, Lisabet. I had a lot of fun writing The Hallucinatory Duke, blending my love of Regency with contemporary characters. I hope readers enjoy the story too.