A lovely review of my novel Pulse and Prejudice, the paranormal adaptation of Jane Austen’s classic romance, was recently posted on Amazon under the heading “Mr. Darcy makes the perfect vampire hero.”

In an era where some vampires use sunscreen and sparkle (whilst dealing with teen angst), “vampire hero” loses some of its oxymoronic value. Why is it, though, that these beings considered monsters since antiquity have now gained a starring role in our romantic fantasies?

Vampires were something to be feared, not desired. Earlier this year, desecrated graves were discovered in Bulgaria, rods thrust through their chests to prevent them from rising from the dead. In his Dictionnaire Philosophique, Voltaire described the common belief of the time:

These vampires were corpses, who went out of their graves at night to suck the blood of the living, either at their throats or stomachs, after which they returned to their cemeteries. The persons so sucked waned, grew pale, and fell into consumption; while the sucking corpses grew fat, got rosy, and enjoyed an excellent appetite.

The situation became so serious that the Empress of Austria finally sent people out to investigate and declare that vampires did not exist just to allow the dead to rest in peace.

Once (generally) accepted that vampires were not real, the legends still fed the imagination. In 1813, Lord Byron wrote about them in The Giaour:

But first, on earth as Vampire sent,
Thy corse shall from its tomb be rent:
Then ghastly haunt thy native place,
And suck the blood of all thy race;
There from thy daughter, sister, wife,
At midnight drain the stream of life;
Yet loathe the banquet which perforce
Must feed thy livid living corse:
Thy victims ere they yet expire
Shall know the demon for their sire,
As cursing thee, thou cursing them,
Thy flowers are withered on the stem.

Hardly the image of the dark, handsome, brooding, conflicted vampire we think of today! That image came from John Polidori, Lord Byron’s personal physician. Ironically, he based The Vampyre on Lord Byron himself. Although still a murderer, Polidori’s Lord Ruthven – a debonair British nobleman – had all the appearances of a gentleman, thus changing the face of vampires forever.

In Dracula, Bram Stoker created a vampire that was both monster and romantic figure. Dracula creates a bond with Mina through blood, and she is powerless to resist. Indeed, many have speculated that, by relieving women of the responsibility of their sexuality, they were also absolved of any guilt associated with their desires. (Le Fanu’s Carmilla explores the relationship between two women – a verboten topic in the Victorian age!) Vampire romances were the ultimate bodice-ripper, with a hero unable to control his desire for the heroine, and the heroine helpless to resist. Swoon!

Being an adaptation of the Jane Austen novel, Pulse and Prejudice does not venture into the bodice-ripping territory (but wait until the sequel!). Although the vampire Darcy has the power to seduce Elizabeth Bennet, would he be too much of a gentleman to use it? Indeed, that is the theme of the novel: Darcy’s struggle to overcome his desire for Elizabeth. He faced such a challenge in Pride and Prejudice as well, but now the stakes are far higher than differences in social sphere.

About Pulse and Prejudice 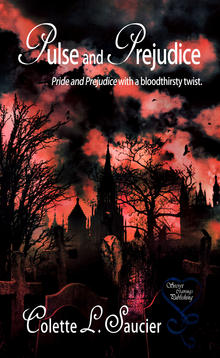 In this thrilling and sensual adaptation of the classic love story, Elizabeth Bennet and the citizens of Hertfordshire know Fitzwilliam Darcy to be a proud, unpleasant sort of man, but they never suspect the dark secret of his true nature. He is not a man at all – but a vampire.

When the haughty and wealthy Mr. Darcy arrives in the rural county, he finds he cannot control his attraction to Elizabeth Bennet – a horrifying thought because, as she is too far below his social standing to ignite his heart, he fears she must appeal to the dark impulses he struggles to suppress. Set against the vivid backdrop of historical Regency England, this adaptation of the classic love story follows the cursed Mr. Darcy as he endeavours to overcome both his love and his bloodlust for Miss Elizabeth Bennet.

Darcy leaned in with his hands on either side of the doorframe and let his forehead fall against the door. He closed his eyes and imagined Elizabeth lying on the bed, her hair splayed out on the pillow, the eyes that had challenged him so brightly just that evening now closed in repose. What little effort, how few steps it would take, for him to be upon her, taking what he needed, sating his thirst.

He pushed himself away from the door and leaned back against the wall beside, despair filling him. He had stood watch over Elizabeth and her sister for two nights and had come back to do so again, to protect them from the very thing he now ached to do himself. The irony sickened him but did not staunch his desire.

Gathering all the resolve he knew it would require to return to his room, he stepped away from the wall. Darcy turned just as the door opened and Elizabeth appeared. They cried out in surprise simultaneously.

She was dressed in her night-rail and wrapper; and, though more modest than even her day dresses, the sight set his nerves on edge. Her hair hung down as he had imagined. She held one hand to her heart as the other gripped a candlestick.

“Mr. Darcy, you frightened me! What do you mean by all this skulking about in the dark? How can you even see where you are going?”

He steadied himself before speaking. “I seem to have mislaid my book. I was unable to sleep and thought to read.”

“The Lord Nelson? I believe I saw it in the library on the sideboard.”

He nodded. “That would be a good place for it.”

She smiled. “Indeed. Although if you are looking for the second volume, you may have to wrest it away from Miss Bingley,” she said with a glint in her eye. He smiled at that; but then they both became sensible to the impropriety of their current circumstance and their close proximity. “I was on my way to check on Jane.”

He knew he should step aside, but he did not. He knew he should look away, but he did not. He held her eyes in his stare, his resistance faltering. Another moment and he might have moved towards her, reached his hand to hold the nape of her neck, pierced her flesh with his aching teeth, pressed his mouth upon her lips; but the light from her candle illuminated his face, and he saw his wan reflection in her eyes. As with all those with his curse, he could not bear the sight of his own reflection, a vision of death itself. Her candle flickered out in an instant, and she gasped and broke her gaze.

“There...must be a draught,” she said. They were in darkness, save the moonlight from the window behind her, as soft as her voice. Something made her step back from him; then she turned away. “Let me find the tinderbox.” When she looked back, he was gone. 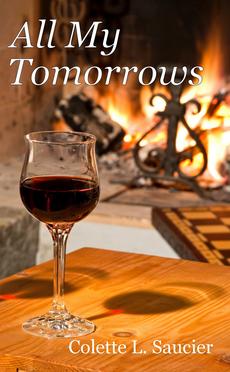 Colette Saucier has been writing poems, short stories, and novellas since grade school. She devoted fifteen months traveling to Britain and researching Regency England, as well as vampire lore and literature, to complete her first full-length novel Pulse and Prejudice.

Colette is also the author of All My Tomorrows, a modern tale of pride and prejudice for the twenty-first century. Her current projects include a sequel to Pulse and Prejudice entitled Dearest Bloodiest Elizabeth, set in Antebellum New Orleans. She lives in South Louisiana with her historian husband and their two dogs.

Trailer for Pulse and Prejudice

Posted by Lisabet Sarai at 2:44 AM

Email ThisBlogThis!Share to TwitterShare to FacebookShare to Pinterest
Labels: All My Tomorrows, Colette Saucier, Jane Austen, Pulse and Prejudice, vampires

Welcome to Beyond Romance! Pulse and Prejudice sounds absolutely delicious. The excerpt has a very Austen-like sound to it.

Thanks for being my guest, and good luck with your books.

Thanks so much for inviting me, Lisabet!

I wrote Pulse & Prejudice using only Regency language and adhered to 19th century style. I wanted it to be as if Jane Austen had conceived Mr. Darcy as a vampire all along!

I hope your followers will enjoy it!

Wonderful excerpt, Colette. This just goes to show that touch isn't always neened to form a pleasureable rise. I could feel the tension between them so clearly, it was so alluring and definitely left me wanting more. Love it, well done! :)

Very delicious, Colette. I'm not an Austen fan and only seem to be able to connect to her stories through remixes. :) Yours definitely intrigues me.

Thank you! I do hope that means you will check it out!