Outside the Comfort Zone

Let me start by thanking Lisabet for giving me so graciously a chance to be her guest. It’s truly an honour to be here.

Write about what you know. All writers must have heard those words about a thousand times before we even published our first story.

But be honest, what could be more fun than ignoring that rule? And I don’t mean get into a spaceship and visit far away worlds, change into a vampire or werewolf, built a castle and become a medieval knight. These and many more scenarios fall into the safe realm of make-believe. We know we don’t live in the far future or ancient past, and our readers know that too. As long as we do our homework and build our worlds believably, readers will follow us to wherever and whenever we will take them, if only because the human imagination knows very few boundaries.

Make-believe can be much closer to home, and perhaps much more of a challenge than pretending to be a shape shifter or an impoverished Victorian lady. What about we write from the point of view of a different gender than our own? Or a different sexuality? A sexual practice we know we could never enjoy ourselves?

I’m a lesbian, of the Kinsey six, and then some, variation. I’m not (sexually) attracted to men at all. I’m also very much married and if monogamy didn’t exist, I would have invented it. I met my wife when I was eighteen, we’ve been together since I was twenty and it’s now thirty years later, so I at least I know that much about myself and my preferences.

And that to me is far more about stepping outside my comfort zone than writing in intimate detail about the male anatomy or to describe what happens between those three men once they’re in a room with a bed. Because being male or female is a gradual process, and even if most of us have bodies that indicate without any doubt whether we’re one or the other, what happens in our brain is far more complicated. Every human need, character trait, talent and peculiarity can be found in both genders, though perhaps not in equal measure. Except for our very specific roles in making babies, nothing is truly and exclusively male or female. It’s even impossible to know with absolute certainty what another member of your own gender feels, even if they share your sexual orientation. It makes an ideal playground for a romance and erotica writer.

But to imagine what it’s like to be single, go to a party, meet a couple and have sex with them, now that is foreign ground to me. It’s not my fantasy, not the chance for adventure I missed. And perhaps that’s exactly the reason why I loved writing Three so much.

Curious about the story of Owen and what happens when he meets Sebastian and Davin? Three will be available at Total E-Bound on November 21, but here’s already a little teaser: 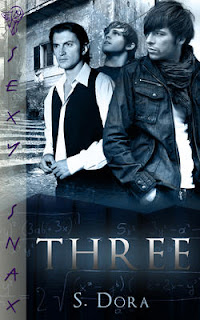 Davin’s back was plastered against Sebastian’s front, or perhaps Sebastian’s front was plastered against Davin’s back. Both moved in perfect counterpoint to the music. The slightly taller boy was grinding his crotch against the thinly covered arse of the shorter one, meanwhile covering the shorter boy’s head with butterfly kisses. He raked his teeth over his boyfriend’s earlobe, resulting in a soft, sweet moan from Davin, who had his eyes half-closed and his lips slightly parted. Owen doubted he was even aware of his surroundings.

Sebastian, on the other hand, looked straight at Owen, challenging him in a way that was quite open to more than one interpretation. That look, as much as Davin’s blatantly exposed sexual need, went straight to Owen’s cock, bypassing any and all rational thought.

Sebastian travelled one hand slowly downwards until his long fingers rested against the clearly outlined erection, but kept the other possessively around Davin’s middle. He traced the bulge with his thumb, whispering into the other boy’s ear. Davin blushed and nodded in agreement to the words only he could hear.

Owen felt he was being drawn into an unpredictable situation but couldn’t deny he was totally mesmerised by the perverse beauty of what was happening between the three of them. Sebastian dancing, for lack of a better word, with Davin, and he, Owen Bartlett, the one who couldn’t help but feel left out, because no matter how much Davin and Sebastian seemed to direct their teasing in his direction, they were still one very-much-in-love couple and one single man. Later he would almost certainly take the stimulation for his one-handed activities from imagining all the possible combinations with him in the roles of both spectator and participant, but for now he was sitting and watching, wishing he was somewhere else as well as hoping this would never end.

Suddenly the music stopped and the lights went on. The party was undeniably over, so Owen prepared himself mentally to go to his room and get some sleep. Halfway up the stairs a hand touched his arm. He looked and saw Sebastian Lane. He knew what the boy wanted from him, and what his own answer would be. Two gorgeous young men invited him to be part of whatever was going to happen in that hotel room… Why would he say anything but yes? He didn’t quite believe they actually wanted him to be actively involved. Maybe they got off on being watched, but even that was too good to turn down. He couldn’t deny his utter humanity.

You can pre-order Three now from Total-E-Bound

Curious about my other writing? I also publish under the name R.A. Padmos, and in August my novel Ravages came out with Manifold Press. (http://www.manifoldpress.co.uk/2011/08/ravages/)

Greetings and welcome to Beyond Romance!

Thanks for a great post! I agree that it's a lot of fun, as well as a challenge, to write what you _don't_ know, or at least what you haven't personally experienced.

I'm really curious as to where you got the idea for this tale.

Thanks so much for your warm welcome, Lisabet.

It's still a challenge, so perhaps it's a good thing I've always been much more adventurous as a writer than in reality.

A man sees a couple of guys and something clicks between them. It was only much later that I realised Owen refused to be anything but a single man. So I decided to give him his way. ;-)

Is it November 21st, yet? Three sounds like a novel right up my alley. I look forward in reading it.

I think we all run into that idea of write what you know, knowing that most of us don;t know that much. Over on Oh Get a Grip we've been writing about our "barren acre" which in some ways is what the truth of the old student writer maxim might really mean, which is taking the special wound or thrill you;ve known and expressing it through an image or a character ebtirely fictional. I'm totally heterosexual, but I've often thought that oneo f these says I should try my hand at a gay or lesbian story just to break out of my squick zone.

And yeah, it's totally worth going beyond the comfort zone, and we all know that's not about monsters and aliens. It's about what lives in our own head.

So, write that gay or lesbian story and you might be pleasantly surprised.

I can't wait to read it!