You are, in fact, not all alone – #LGBTQIA #Healing #Giveaway @Lena_S_May 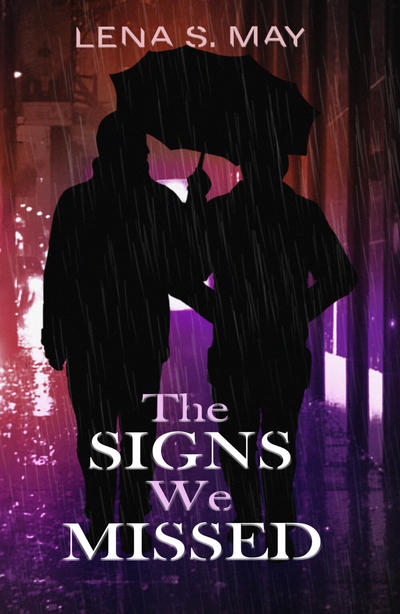 Welcome to Beyond Romance, Lena! I’m really delighted to host your tour for The Signs We Missed. I hope you’ll tell us this book came from. What stimulated you to write it? What do you want readers to take away from it?

It’s not an exaggeration when I say that The Signs We Missed comes from the bottom of my heart (it’s a metaphor).

I started writing about its main characters when I was fifteen or sixteen years old, as a teenager struggling with depression and an eating disorder and feeling like she was all alone in the world. You won’t be surprised to hear that Luke, the protagonist, is a teenager who struggles with depression and an eating disorder, and feels like he is all alone in the world. He is also addicted to narcotics, which is something I witnessed first-hand in a close family member when I was little.

At first, writing those stories was my way of coping, maybe even of creating the illusion that I am, in fact, not all alone. I have always wanted to be an author, but it took me some healing and a lot of time to realize that this was the story I wanted to tell, and a lot more time to figure out how to tell it.

Ultimately, I guess, I could have tried to make it with any other one of the stories continuously running through my mind, and it might have been easier to find an audience for a funny or happy story, but a happy or funny story was not what I felt I needed to write.

I needed to write a real story, to find a path that would lead to putting a book out in the world that might tell somebody out there what I would have needed to hear so desperately: You are not alone. The world is full of people like you. It might be a damn long tunnel, but they’re not lying when they say there’s light at the end of it.

The tunnel sucks, though, and sometimes it’s pitch black. I never had any intentions of sugar coating that. As I said, The Signs We Missed is a real story; not in that it happened exactly like this, but in that it could happen – and it does. I believe all of us have walked or even crawled through their own tunnel, and sometimes we’re tempted to think we’re all alone because all our tunnels look so different. Do they, though? In those moments when it’s pitch dark around us, they might just be the same. There might be dozens of people all around us, but we would never find them if we stopped in the darkest place.

So what I’m hoping readers will take away from The Signs We Missed is this: Do not stop. And if your tunnel has long opened to a pink sunrise, don’t forget to look behind you and reach out a hand.

Thrown out by his mother, 17-year-old Luke hopes to overcome his narcotic addiction and depression by changing his surroundings. At his new school, he quickly becomes friends with Sean, but finding that his developing feelings aren’t returned, Luke retreats into old habits. Determined to hide his self-injurious behavior and an advancing eating disorder, he soon risks much more than a broken heart.

When Sean meets Luke, the last thing on his mind is falling in love with a boy. Grappling with his own conflicting emotions and trying to keep them from his suspicious girlfriend, he brushes off Luke’s strange behavior. But when Luke suddenly cuts him off, Sean is forced to confront the truth and take action to save his best friend.

I'm not sure how yet, but it's what the white blank hospital room walls keep hammering into my head as the pungent, antiseptic smell makes my eyes water when all I'm trying to do is keep my composure.

It's what they're all trying to say – the half-dead, bled-out body of the boy lying in the bed beside me, his fingers slowly losing their grip on mine, the over-worked and under-paid nurse already rushing down the corridor, the non-specialist assistant doctor, paying half his attention to the arrhythmically beeping monitor, the other half to fumbling his phone to mute.

And then there's my brother, leaning against the wall in the corner, his crystal blue eyes asking not what I've done but when I'd planned on telling him that I was gay – which I'm really not. When I don't react, he looks down to the face resting on the pillow next to my elbow, and I do, too: empty whiteness staring back. I'm beginning to think it's burning into my retina, sucking every last speck of color out of the sky as I finally raise my glance to the window. I can't let myself get lost in the void that is now his face if I want to clear my head, but there isn't a single cloud drifting by to take hold of my attention, not a single leaf left in the trees, no bird, not even a gust of wind. It's just me and my trembling heart and my racing thoughts, and yet, my loneliness is nothing in the face of what I now know he has been going through. 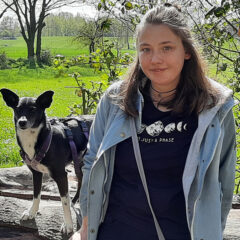 Lena S. May is a Germany-based author and student. Living with her dog, she enjoys long walks, ideally followed by a cup of tea and an equally long reading session. After graduating university with a degree in English and American and German Studies, she is working towards her Master of Education to become a secondary school teacher. With her writing, Lena hopes to raise more awareness for mental health and the importance of looking out for one another and oneself. Her debut novel will be published in August 2022.

Lena S. May will be awarding a $10 Amazon or Barnes and Noble GC to a randomly drawn winner via rafflecopter during the tour.

Hello, Lena. Thank you for being my guest and sharing what is clearly a very personal book.

As someone who lived through the hell of an eating disorder (and managed to survive), I know what you mean about dark tunnels.

I love the cover and think this book sounds like a wonderful read!

I like the colors on the cover, this sounds great