What if your mortal enemy holds the key to your salvation? #SciFi #SpaceOpera #BookBundle @KayelleAllen If you're fighting immortals who always get back up, you'd better have a way to do the same thing. Otherwise, it's lights out...

When you're a soldier genetically enhanced to the point of near immortality and you fight a mortal soldier resurrected with the pilfered blood of your people, friendship never enters the equation.

But what if the enemy you've despised your entire life holds the key to your salvation?

Tornahdo is facing his most dangerous mission, the very reason Ghost Corps exists.

He must take out the king responsible for every war between humans and Ultras since the origin of the Ultra bloodline.

If he succeeds, the war is over.

If he doesn't, the Ultras will rule mankind for another thousand years… 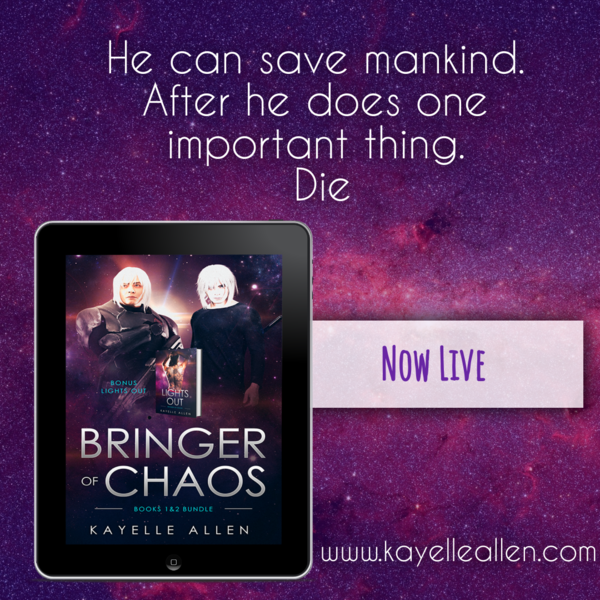 In this scene, Tornahdo is having a quiet drink prior to leaving on a mission, when a member of Ghost Corps shows up.

Ravenstongue sauntered toward him. "Why you here?"

Tornahdo kicked back in his chair. After stretching out his legs, he crossed his ankles. "Why do you care?"

"Big ops tomorrow. Lights out in ten. Time for you to go home and go to bed."

Behind the bar, the keeper closed up shelves and battened down doors.

"Yeah?" Tornahdo flicked a hand toward the door. "I'll follow you out."

"I'm not leavin'. Didn't you hear? We passed inspection with the highest scores. Got a free night out." Ravenstongue jabbed a finger toward Tornahdo. "But you gotta go home like a good boy."

In no kingdom in the galaxy would that happen.

The keeper ducked behind the bar while the goons flanked their wannabe boss, imbecilic grins in place.

A pair of demons usually sat on Tornahdo's shoulders. The bad demon laid out strategy while the good demon discouraged action. Tonight, the good demon flipped a middle finger toward Ravenstongue with a not-so-subtle suggestion to kick his ass.

Tornahdo took his time rising, slid his chair under the table. "What did you say?"

Hanging his thumbs in his belt, Tornahdo gave him a slow smile. "Go back to the bar, finish your drink and we'll pretend we're all friends and leave together. This is your last chance for a peaceful end."

"Peaceful." With a scoff, Ravenstongue jerked his head toward Short Goon. "You hear that?"

Ravenstongue jabbed him with an elbow.

"No, you idiot. Shut your face and back me up."

How did these hotheads enlist? Ghost Corps must have been desperate for bodies. Literally. A fighter's corpse they could reanimate. Which was a sobering thought.

Was that what the corps thought of him?

Origin of Pietas: Bringer of Chaos

Traitors stripped the immortal king Pietas of everything.

Now, marooned on a deserted planet, his only hope of finding his people lies with the human who imprisoned him.

That doesn't mean he'll humiliate himself by asking for help. Enough is enough. Pietas already died a thousand times to save them. How much more can he sacrifice?

But when he realizes that without humbling himself before a mortal, he will never find his exiled family, his salvation relies on the one thing he swears does not exist.

The honor of a human… 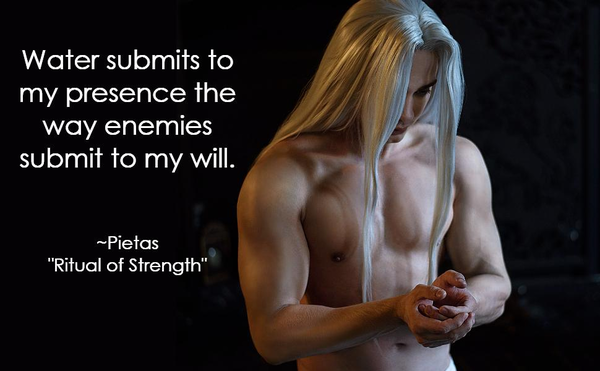 In this scene, Pietas experiences an unfamiliar situation -- having a mortal friend.

"My father would get so angry with me, Six. He'd say it under his breath, but I heard. He'd call me useless. I say that about myself."

"How can you think of yourself as useless? You're the most powerful Ultra ever created. Everybody knows that."

"Wow." Six tossed part of a small branch onto the fire, sending sparks spiraling upward. "Biggest pity party I've ever been to."

Pietas leaned on one hand to face Six. "What is a pity party?"

"When you feel sorry for yourself and expect others to do the same thing 'Poor me. Look how I'm suffering.' That's a pity party."

"Excuse me for sharing how I felt."

"You were doing fine, until you said you were useless. I don't care who told you that. It's a pure out-and-out lie and you know it. To let anybody else's opinion of you keep you from being your best..." Six threw down the stick. "Look, Ultra. That's not you, okay? Listen to me. I sat with you while you were nothing but two big blue eyes, and blackened skin stretched over bones. You couldn't lift your head, you were so weak. You tried not to show how much pain you were in, but I could see it. I could hear it in the way you panted, trying to breathe. The way you hobbled about as if all your bones were broken. But you fought like a caged animal to get your strength back. I will never accept any lie about you being useless. You're one of-- No, you are the strongest person I've ever known."

The pride at those words from so dear a friend--a human friend--brought tears to his eyes. Pietas turned his head, and blinked them away.

Exiled on a barren world...

When the immortal king Pietas is marooned with no food and few survival tools, he knows it means sacrifice.

But half a million of his people sleep in cryostasis, trapped in their pods and it's up to him to rescue them.

He must manage it with an irascible mortal, an entire tribe of know-it-all sentient panthers, and one fascinating woman who's the designer of their people's finest weapons--and telepathic.

All while dealing with the most dysfunctional family in the history of forever... 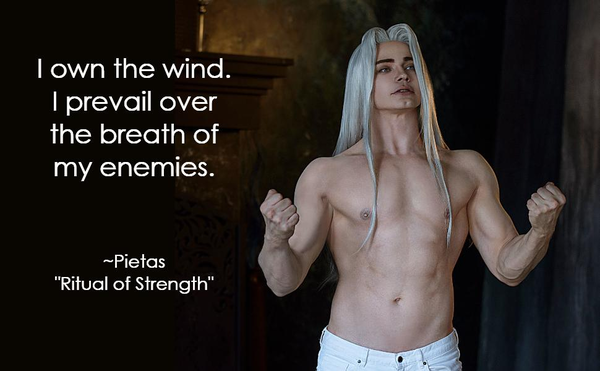 In this scene from Bringer of Chaos: Forged in Fire, the not-quite-human Six offers water to the immortal king, Pietas.

Six slid their canteen off over his head and held it out to Pietas.

Accepting anything from a human, an altered one at that, had violated every instinct at first. To take from an enemy, yes. Always. Let one give you something as if you needed it? Admit a weakness before an enemy?

But this was Six.

Ultras could go days without water, but they consumed it when they had it. He wiped one dusty hand across his mouth. The satisfaction of assuaged thirst never failed to please. What simple things in life brought pleasure! In captivity, he'd dreamed of even a drop to cool his tongue. He'd sworn he'd never take water for granted again.

Six had offered it to their companions during the climb, but the entire lot refused anything a mortal's lips had touched. Yes, Six was a quasi-immortal. A dead human soldier who'd been resurrected and enhanced with Ultra blood. A "ghost." But to the others, that gave him even less status.

Pietas wavered on few things, but on this? Should he call the man human, mortal, quasi-immortal, or ghost? He'd elected to choose as the mood struck. But one in particular annoyed Six.

"Thanks, ghost." He thrust the canteen against Six's chest.

Staggering, he swore in Spanish. "Find another name for me."

"Tell me your mortal name then."

"You know I can't." Six scratched his cheek. "Gotta protect my family. If your kind knew who they were, they'd slaughter them. You wouldn't, but them?"

Now they were getting somewhere. "So you do trust me?"

"Pi, there's more honor in your left big toe than your entire race combined." He tipped up the canteen but then paused. "No offense."

"None taken. But we're stranded, my friend. Unless a miracle happens, by the time we get off this world, your family will be long dead." He added, "No offense."

Six finished his drink and plugged the canteen. "None taken. Sorry. Can't do it." He lifted the strap back over his head and settled it onto his shoulder, the canteen at his back. "Seriously, Pi, your people hear you call me you-know-what, it'll give away I was Ghost Corps. We both know what they'll do to me."

Congratulations on the new release, Kayelle!

Thank you, Lisabet. Happy to get this book out there finally. :)