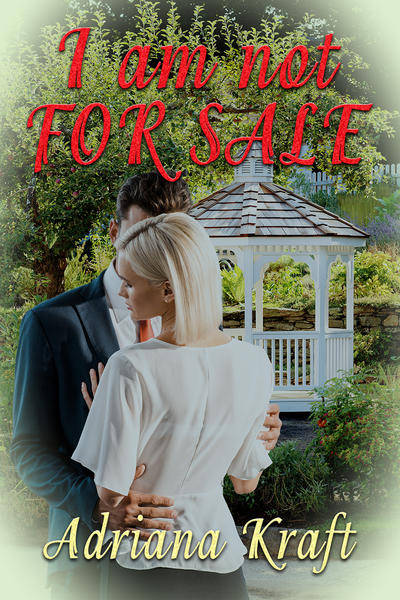 A desperate espresso café owner, a determined coffee franchise rep, a quiet Midwestern town, anonymous threats out of the blue—where does the true danger lie?

On first picking up our latest release, people might think Mr. Kraft and I have fallen blindly into the “blonde Russian bombshell” trope. But our heroine, Nadja Petrov, was born out of a fortuitous series of events in our life.

Before settling in the Southwest, we lived for a while in an upper Midwest small town. Though only boasting a population of about 30,000, it had a vibrant arts and culture community, and we frequented a favorite sole proprietor espresso café that often hosted live music and readings – yes, including readings we sometimes gave. At about the same time, plans were being made to permit a new casino to be built in the region, and there was much talk and drama about where the casino might locate.

While all this was going on, I was privileged to spend two weeks in Ukraine for work. The project took me into some of Ukraine’s more remote areas, always accompanied by a translator and a local project director. Weekdays were filled with attending to business, but weekends were open to explore Kyiv and experience cultural highlights.

Nadja’s history and character emerged out of that experience. We set the book in 2005, when Nadja is 28. This enabled us to place her childhood while Ukraine was still part of the USSR, as well as to give her a personal experience of the end of Communist rule in 1991, when she was 15. 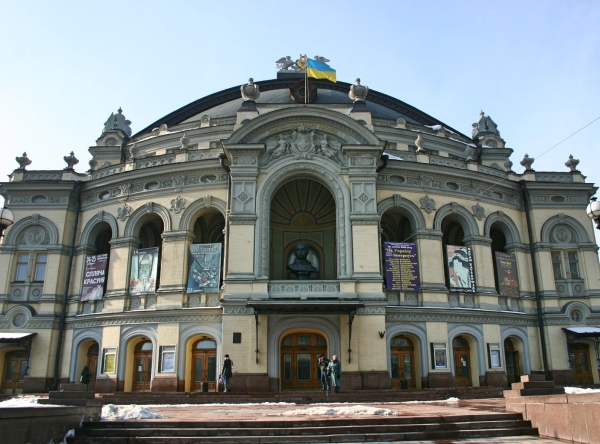 Here is the Kyiv Opera House, where I was fortunate to attend both an opera (with English subtitles) and a stunning ballet. We blessed Nadja with early ballet training. Tall, statuesque, she was selected young and being groomed for the Russian Ballet – a future that was ultimately denied to her, though we won’t spoil our story by sharing all the reasons. It turns out her love of dance and her commitment to physical conditioning never faltered, and these qualities play a key role as her story unfolds on our side of the Atlantic. 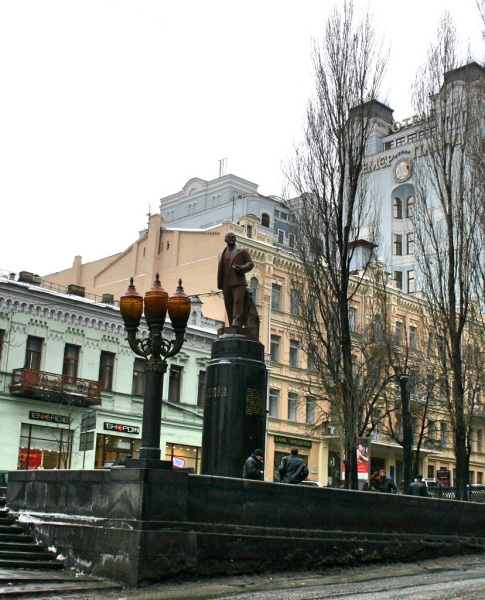 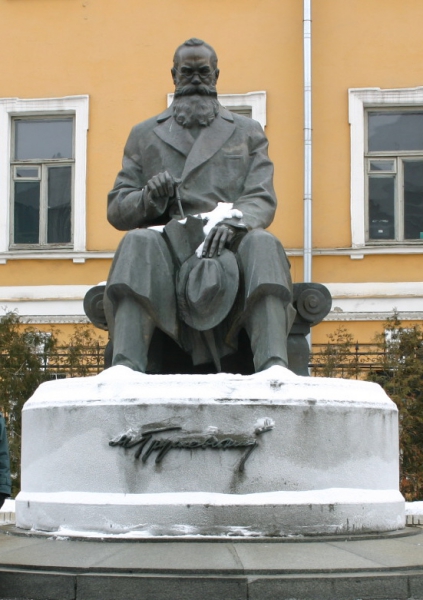 Kyiv Statues – here, of Lenin, and of a national Ukranian hero, Mykhailo Hrushevsky. When you think of statues to heroes, you’re likely to think of generals, or perhaps presidents or politicians. Hrushevsky was an intellectual, a historian, and a tireless leader to preserve and promulgate Ukrainian culture under the thumb of Russia during the first half of the twentieth century. Nadja embodies this commitment to learning and culture. She named her espresso café to convey this love – Nadja’s Literary Cappuccino – and hosts readings, live music and local artisans most weekends. 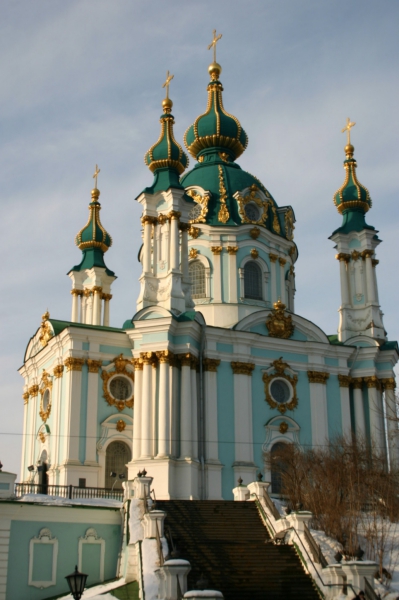 Perhaps most of all, I was struck by the resilience and determination of the Ukrainian people to maintain their orthodox faith during all those decades of communist rule. St. Andrew’s Church (Kyiv), pictured here, was built in the middle 1700s. The communist regime halted St. Andrew’s religious services in the early 1930s and turned the church into an anti-religion museum. Religious practices were banned across Ukraine – yet, many of the local staff I worked with had been smuggled as infants by their families to orthodox priests, to be baptized in secret. All those decades of suppression could not snuff out the flame. 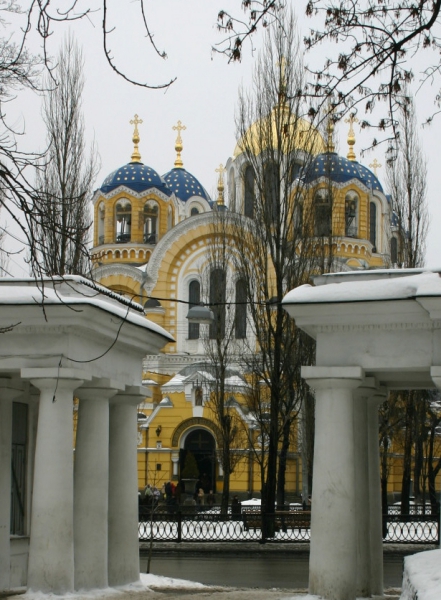 The second church pictured is St. Volodymyr's Cathedral (also Kyiv), taken from the Zoological Park entrance. It was late afternoon when we wandered into it, to be suddenly transported by the sound of Orthodox vespers being sung. I’ll never know whether it was the Rachmaninoff Vespers, but it was immediately familiar and ethereal. There was a sizable congregation toward the front of the church, and worshippers were also browsing the side aisles and lighting candles of supplication.

We play both sides of this phenomenon in our story. Nadja herself is not a believer; too much has happened in her life for her to trust. But her Aunt Ivett, who immigrated to America earlier than Nadja, is still faithful, frequently lighting a candle for herself or her niece.

And one more possibly familiar touch. Did you ever as a child have one of those painted wooden Russian dolls, each one of which opened to reveal an even smaller painted doll inside, sometimes as many as six or seven? I did. My hosts took me to a street market where I could purchase some from an artisan who painted them. I resisted a Green Bay Packer doll and went for one in traditional dress—but we were able to write the football player into the story. 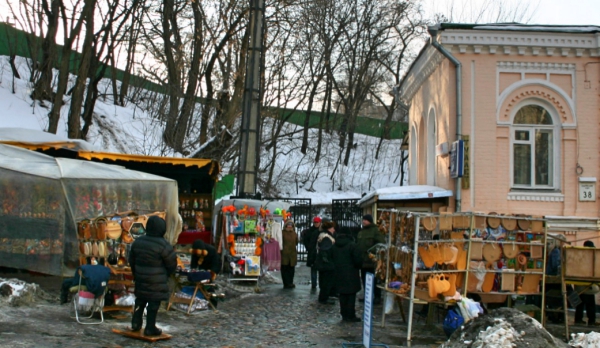 Set Up: Our hero, the franchise district rep Kevin Langley, is divorced, but he comes as a complete package with his seven-year-old son, Danny. Here, Kevin’s off sleuthing for the afternoon, and Danny is managing to stay entertained between Nadja’s café and Aunt Ivett’s gift shop next door.

“Your coffee is better than Java Beans,” Danny declared, flashing a smile at Nadja. He was sipping a concoction of mostly warm milk and a little bit of decaf espresso.

Nadja stood behind the counter and smiled back at him where he sat at the nearest table in her shop. It was mid-afternoon, and the flow of customers had lulled. An older couple sat in one corner, engaged in deep conversation. A young college-age couple sat in another corner. Nadja ignored the way the young man rubbed a hand against the inside of the woman’s bare thigh. The couple remained oblivious that a world existed around them. She could empathize with them. She caught herself imagining Kevin’s hand working its way along her thigh, inching higher and higher.

She blinked and flushed slightly. The boy’s words had definitely reminded her that a world existed around her. “No,” she said smoothly, “just appreciating your praise for my coffee. You are a charmer.”

“Yeah?” Danny drew himself up with pride. “I’m often told I’m just like my dad.”

“It must be about time for you to go back and visit Ivett’s shop.” She wasn’t about to engage in a prolonged conversation with Danny about his father.

Danny stood and clutched his decaf latte in one hand. “You’re trying to get rid of me.” His smile seemed benign enough. “That’s okay. Ivett is a lot of fun.”

And she wasn’t? Nadja tried not to grind her teeth. “There’s probably more to do in her store. Perhaps you’d like to visit a hobby store. Do you put models together?”

“Sure.” His eyes brightened. “I specialize in anything to do with NASA. My dad helps me with them. Do you do models?”

“Not exactly. Do you see the colorful eggs and the dolls at the end of the counter?”

He nodded, looking at the counter. “Ivett has lots of them in her store, too.”

“Really.” He squinted at her artwork. “That must take lots of patience. I’m not sure I have enough.”

“Maybe.” He didn’t look too convinced. “The eggs should be interesting.” He frowned at her. “But I don’t play with dolls.”

She ignored his comment and walked down to the end of the counter, where she picked a doll up. She began taking it apart carefully while keeping one eye on the boy. As she’d expected, his eyes grew in surprise when she pulled a second doll out of the first, and then a third and a fourth, and finally a fifth.

Grinning, Nadja replied, “The individual pieces are made in my home country of Ukraine, and then I paint them, usually on winter nights.”

“No, you can paint them however you want. I’ve even seen some painted as football players.”

“Really?” Danny stood on his toes to get a better look. “Maybe I could help you.” He cocked an eye at her. “But it’s not winter.”

She found herself laughing easily with him. “I can probably make an exception for you.”

It all seems simple enough—Ukrainian immigrant Nadja Petrov is determined to hold on to her thriving new coffee shop, Nadja’s Literary Cappuccino, and Java Beans District Rep Kevin Langley is equally determined to move into her North Iowa town with a franchise and run her out of business.

He scopes her out, she keeps a watchful eye on him, and the sparring begins. But there are other players involved, and the web of intrigue soon threatens Nadja, her shop, and her aunt as well as Kevin, his potential franchise, and his son. Within this cauldron simmers a sexual attraction between Nadja and Kevin that catapults them to overcome their fears of intimacy and commitment. Their lovemaking is tender and raw. Their love is nearly lost in tragedy—can it survive doubts, fire, and even a death?

When it’s Time to Heat Things Up Welcome back to Beyond Romance, Adriana, and thanks for a wonderful post!

I've never been to Ukraine, but you've definitely made me want to go.

Thank you so much for hosting me today, Lisabet! I hope you get to go!