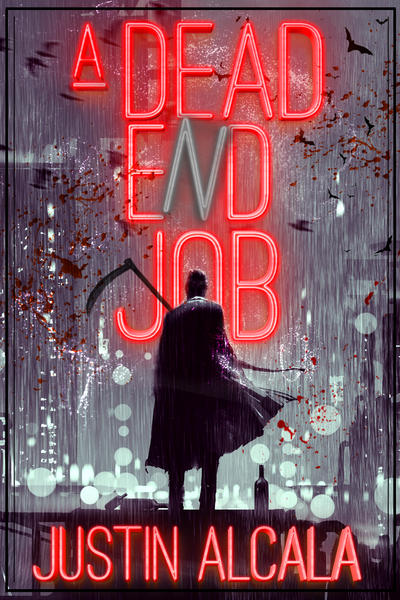 Fans of Terry Pratchett and Shane Kuhn's THE INTERN'S HANDBOOK will love this noir supernatural thriller.

Death needs a vacation. Badly. But there's a catch: There are people who cheat the system, always falling through the cracks and not dying like they're supposed to. Who's going to take care of them while Death's sipping on sangria?

The answer is simple: Death needs an intern, and it doesn't take a rocket scientist to realize that one prospect, Buck Palasinski,-a bankrupt hitman with a roleplaying addiction-might have what it takes. While scoping out his next target, Buck gets drilled in the forehead by a bullet and falls right into Death's lap.

If they shove him back into his body, he'll have a few weeks to prove that he has what it takes to be Death's right-hand.

All he has to do is take out Public Enemy No. 1, John Dillinger, and quit smoking.

Today was going to be busy. I don’t know how I’d ﬁt a murder into my schedule.

For starters, I was out of coﬀee. I don’t think anyone can really start the day unless they have a cup of joe. Not me at least. Since I live in a more aﬀordable part of Chicago, there were no corner coﬀee shops charging mortgages for a ﬁx within walking distance. Which means I had to drive deeper into the city to feed the shaky caﬀeine monkey beating on my back. I joined a local horde of zombies in a hipster neighborhood called Bucktown as they waited in a Disneyland-worthy line for a chance to be a real boy or girl again. This gave me time to think about my to-do list.

I needed to return my library books. I was ﬁnally catching up on my Bukowski novels after years of recommendations from friends. Why is good advice so hard to swallow? Since I paid for everything in singles and change, I couldn’t just buy a book online. I had to check them out whenever a reading itch needed a scratch. Afterwards, I’d need to replace the squeaky brakes on the van, shower, and then pick up a new hammer strut pin from Denny’s Pawn Shop. Denny and I had built a relationship based on trading illegal ﬁrearm parts, which was great for a guy that doesn’t like proof of sale when it came to his career tools. Finally, my role-playing group had a six o’clock table reserved for our D&D campaign at the neighborhood gaming store. We were nearing level ten, and as the party’s wizard, they’d need me to survive our latest adventure. Hmm, when could I possibly squeeze in work?

“That’ll be twelve-ﬁfty,” declared the barista with black framed glasses.

“For a cup of plain coﬀee?” I stared at the register’s cost display. “I mean, seriously?”

The acne covered art history major working the register didn’t ﬂinch. He must have been seasoned.

“Do I get a veteran discount?”

He shook his head. I used my sparse wallet insulation to pay for the mud, but only after my debit card declined. Now I was really running late. 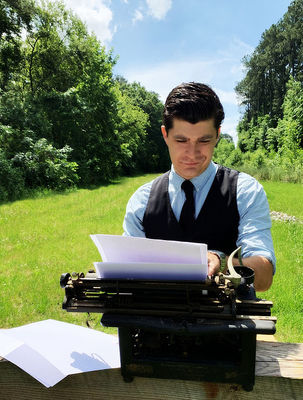 Justin Alcala is a novelist, nerdologist and Speculative Literature Foundation Award Finalist. He’s author of the novels Consumed, (BLK Dog Publishing) The Devil in the Wide City (Solstice Publishing) and Dim Fairytales (AllThingsThatMatterPress). His dozens of short stories have been featured in magazines and anthologies, including It Dances Now (Crimson Street Magazine),The Offering (Rogue Planet Press) and The Lantern Quietly Screams (Castabout Literature). When he’s not burning out his retinas in front of a computer, Justin is an adventuresome tabletop gamer. He’s also a blogger, folklore enthusiast and time traveler. He is an avid quester of anything righteous, from fighting dragons to acquiring magical breakfast eggs from the impregnable grocery fortress.

Most of Justin’s tales and characters take place in The Plenty Dreadful universe, a deranged supernatural version of the modern world. When writing, Justin immerses himself in whatever subject he’s working on, from research to overseas travel. Much to the dismay of his family, he often locks himself away in his office-dungeon while playing themed videos and music over, and over, and over again. Justin currently resides with his dark queen, Mallory, their malevolent daughter, Lily, and their hellcat, Misery. Where his mind might be though is anyone’s guess.

Justin Alcala will be awarding a $50 Amazon or B/N GC to a randomly drawn winner via rafflecopter during the tour.

You hooked me with this, Justin!

Looking forward to reading it.

Coolness! Got a real kick out of reading your biographical blurb too! reneela2000(at)gmail(dot)com

Oh, is this awesome! I want to thank my magnificent host for featuring my book. Second, I want to thank readers. As an uber-nerd, I feel like I’m the ugly duckling finally finding my homie-swans whenever I discuss books. On that note, if you didn’t know, A DEAD END JOB is an absurd urban fantasy novel dripping with geek references, pop culture, and dick jokes. Feel free to ask me anything you want, even if it’s advice about what you should do about finding your parent’s OnlyFans account. I’ll check in as much as I can to answer your questions with multiple segues about why I wear clothes in the shower.

He could save himself a lot of money if he just bought his own coffee pot! Sounds like my kind of read!

I should brave this one - it sounds like it will be my first time, and I never could resist first times!