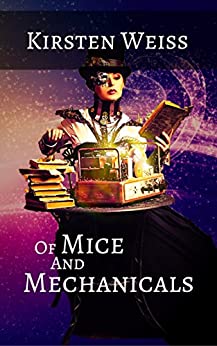 Of Mice and Mechanicals: A Steampunk Novel of Suspense by Kirsten Weiss

Having survived her harrowing confrontation with the Mark, a ruthless cabal determined to steal the results of her brilliant father’s research (in Book 1 of this series, Steam and Sensibility), young inventor Sensibility Grey wants nothing more than to be left alone to build her clockwork marvels. She has established a workshop in the gold-obsessed frontier town of San Francisco, where she supports herself by designing machines for mining entrepreneurs. Meanwhile she secretly pursues her deceased father’s investigations into “aether”, a mysterious force with the potential to transform society – or to power near-irresistible weapons.

Alas, Sensibility’s work attracts unwelcome interest from many quarters. Agents of the U.S. government want to recruit her to the federal cause. Vigilantes, possibly associated with the Mark, keep trying to kidnap or kill her. A medium who claims to have contact with the spirit world believes Sensibility can build devices for him that will scientifically validate the occult phenomena that occur during his seances. Finally, a stranger – a young female inventor at least as brilliant as Sensibility herself – has vowed to revenge herself on Sensibility for the supposed theft of her own father’s aether research.

I don’t just write steampunk; I also love to read it, especially when the stories center around female protagonists. However, as a steampunk author I may be more critical than a normal reader. Steampunk needs the right balance between fascinating but plausible gadgetry and believable alternative history, which is rather difficult to achieve (as I know from personal experience).

I enjoyed this book more than the first installment in Ms. Weiss’ series. Sensibility has more opportunity to demonstrate both her cleverness and her courage. Nevertheless, the myriad characters and multiple crises still struck me as a bit of a mishmash. The plot continues to be somewhat incoherent, and the heroine continues to behave naively, despite all the demonstrated threats to her existence.

The connection of aether with the supernatural, and the appearance of weird other-worldly characters in the story, also violate my expectations for steampunk. There’s technology, and there’s magic; in most cases I don’t think they mix.

The character of Flora is a great addition (as well as the continued presence of dauntless FBI agent Jane Algrave). The chapters told from Flora’s perspective are compellingly creepy. I was disappointed, however, when she vanished from the story without any resolution.

Then there’s the romance thread introduced in the first book, which seems to peter out in this one. The author subtly suggests that one of the federal agents might step into the role of Sensibility’s suitor at some point, but in this book the young inventor is left somewhat bereft when the man she’d started to see as a potential romantic partner turns into nothing more than a friend.

I must say that Kirsten Weiss does a great job on dramatic, climactic scenes. The battle in the Mission church at the end of Book 1 was fantastic. This novel ends with an equally rousing, edge-of-your-seat extravaganza. It’s almost worth reading the book just for this final scene (which I won’t describe, since I don’t want to spoil the pleasure).

All in all, Of Mice and Mechanicals was an enjoyable read, despite my criticisms. I have a suspicion I’ll probably succumb to the temptation to buy the next book in the series.