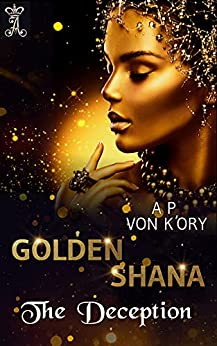 A brilliant and sometimes ruthless businesswoman, Svadishana Lindqvist doesn’t scare easily. Still, her fraught relationship with Roman Castell inspires almost as much terror as it does joy. When for the sake of her own sanity she tries to put some distance between them, her “savage” crashes the gates and once more claims her as his woman.

At the start of The Deception, the fourth installment in this unconventional romance series, Shana is finally willing to call the feelings she has for the sexy but arrogant billionaire “love”. Though she is still skittish, finding it difficult to imagine how her peripatetic life and demanding career could possibly mesh with Roman’s, she invites her lover to Sweden to meet her family. Every summer, the Lindqvists and their friends gather at Baccarat, their palatial Gothenburg estate, for a lavish joint celebration of Shana’s birthday and that of her father Erik, and this year Roman is to be among the guests.

Roman is the first man Shana has ever introduced into her tight-knit family circle. Though he is delighted by this sign of increasing trust, the Lindqvists’ incredible wealth and power trigger deep feelings of inadequacy. Motivated by insecurity and possessiveness, he comes close to alienating his “Golden” once again.

Trying to mend the rift between them, he shares the story of his abortive attempt to neutralize her nemesis Grieg, aka Phoenix. She is shocked to learn that the man who raped her at university, who she believed had been disposed of long ago, is still alive and indeed has been stalking her. She vows to take matters into her own hands and to eliminate Phoenix once and for all. That means she has to lie to Roman and keep him at a distance – for the sake of his own safety.

The Deception may be the most satisfying book so far in the Golden Shana epic. The pacing is excellent and the treatment of the different characters far more balanced than in the early novels. Shana’s and Roman’s chemistry has become more believable as their relationship deepens, without losing any of its intensity. Both are slaves to their desire for one another. Neither is used to experiencing such overwhelming need. However, Shana is starting to recognize the power she has over her Rome, and to wield that power in the bedroom.

I greatly enjoyed the scenes at Baccarat, especially the interactions with Shana’s family members. Having recently read the author’s Bound to Tradition trilogy, the story of Shana’s parents, I felt that I knew them all. Eldest sister Loyana in particular is a vivid character, but each of the Lindqvists stands out as an individual.

I still find Roman to be immature and self-centered. It’s a little hard for me to believe that someone with such poor impulse control could be so successful as a hard-headed businessman. Though he worships Shana, he often acts or speaks without considering her feelings. The author, however, obviously adores him, so I guess I need to believe that his awkward and occasionally cruel behavior reflects his complete incapacity to deal with the unfamiliar state of being hopelessly in love.

This fourth book resolves some important conflicts that stand between Shana and Roman, but not all of them. Ms. von K’Ory will soon release the fifth novel in the series. I do hope that Shana and Roman manage to adapt to one another and find a happy ending. Their fiery, unpredictable relationship is a bit exhausting!

Posted by Lisabet Sarai at 6:31 AM

Thanks so much, dear Lisabet, for once again reviewing my work and offering me your valuable critical and constructive take on Roman and Shana, in your esteemed Blog.

I truly appreciate this.