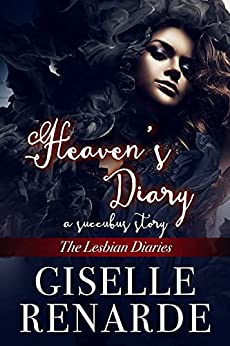 For young trans woman Heaven, buying a house together with her lover Terra and her best friend Elle seems a dream come true. When the three move into the house, though, Heaven discovers she’s caught in a waking nightmare. Her bedroom seems haunted by a mysterious presence that can make lightbulbs explode and bring Heaven to orgasms so intense they’re painful. In other rooms, Heaven sees things invisible to Terra and Elle, images that reinforce her sense that Terra is growing ever more distant. That suspicion is reinforced when Heaven discovers her housemates are sexually involved.

Abandoned and rejected, Heaven finds herself more and more obsessed with the seductive but vicious creature who bestows awful pleasure in return for the chance to drain Heaven’s life energy. Heaven is caught in a deadly downward spiral, desperate for the attention of the succubus even as she understands that the malevolent being is slowly killing her.

Heaven’s Diary is a fitting read for the Halloween season. Giselle Renarde evokes a choking sense of dread, an atmosphere so oppressive that I almost stopped reading due to my personal discomfort. The book is far more like horror than erotica, though it does include some supernaturally intense sex. The succubus is skillfully portrayed as enticing but utterly non-human. The scariest aspect of the story, though, is Terra’s cold treachery. Buoyed by love, Heaven might have the strength to fight the influence of the creature that haunts her dream house, but when she is betrayed and cast aside, she has nowhere else to turn.

This book is part of Ms. Renarde’s Lesbian Diaries series. I was impressed by the fact that Heaven is unquestionably a woman, even though she still has male genitalia and indeed the succubus takes her as if she were a man. Her voice, her emotions, her feelings about her body, are all feminine.

I am glad that I persevered and finished the book; I don’t think it’s a spoiler to share the fact that Heaven manages to escape and to heal. For one thing, I don’t want you to give up in the terrifying middle part of the book, when it seems that she’s doomed.

I’ve been reading Giselle Renarde’s work for more than a decade and know that she’s remarkably versatile. She can write subtly emotional erotica as well as utterly filthy kink. Heaven’s Diary shows that she’s equally adept at horror. Be warned!

Posted by Lisabet Sarai at 1:30 AM