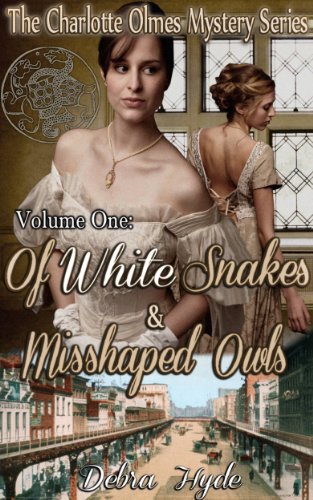 In 1880’s New York, a dead body dumped in a Chinatown alley, outside an opium den, is nothing unusual. This body, however, belongs to a popular western doctor who has been treating the impoverished Chinese population for years. Furthermore, the murder seems especially vicious – an ice pick impaled at the base of the skull.

Still, the police have little interest in the case; they’re happy to let the yellow-skinned inhabitants of the Asian ghetto deal with their own problems. So the exotic Miss Tam, who was secretly married to the victim, is forced to seek the help of unconventional detective Charlotte Olmes.

Charlotte is a brilliant renegade who accepts cases only from female clients. She’s ready to venture into the foulest corners of the city in order to ferret out the truth. Though cross-dressing is viewed as scandalous in the late nineteenth century, Charlotte has no compunctions about donning male clothing, even sporting a mustache. Her assistant, companion, and lover Joanna Wilson is less bold, at least in public. In private, though, Miss Wilson proves to be as daring as Charlotte herself.

Together with their dedicated, gender-flexible manservant, Charlotte and Joanna unravel the clues, track down the villain who killed Miss Tam’s husband and help bring him to justice. The victory is bittersweet as Miss Tam is forced to conform to the constraints of her gender and culture. Charlotte and Joanna, on the other hand, enjoy an enviable freedom.

Of White Snakes and Misshaped Owls is the first book in Debra Hyde’s Charlotte Olmes mystery series. As suggested by her name, Charlotte is intended to be a female, lesbian version of Sherlock Holmes, with Joanna as her Dr. Watson. When I first heard about this series, I was very eager to sample it. I was first introduced to the Sherlock Holmes adventures in primary school, and I’ve been an avid fan ever since. Sherlock Holmes is one of those larger than life characters who invite riffs and spin-offs. Ms. Hyde’s premise seemed to hold great promise.

Unfortunately, Charlotte has little in common with Sir Arthur Conan Doyle’s immortal detective. In this book, at least, she doesn’t really demonstrate any exceptional powers of observation or deduction. Of course, this might be a consequence of the fact that the “mystery” in this novella is rather light-weight and indeed quite easily solved.

Furthermore, she’s not nearly moody or irascible enough to be compared to Holmes. Indeed, both she and Joanna seem too young to carry the weight of the Sherlock Holmes mythos. A female Holmes, to be convincing, should be in her forties, weathered and a bit cynical.

I would have loved to see Joanna take Charlotte while they’re out on the streets gathering clues. I can imagine them in some seedy cul-de-sac, Joanna unbuttoning the fly of Charlotte’s trousers to slip her gloved hand inside. Or perhaps Charlotte would lay Joanna out on the chaise in some opium parlor in order to indulge in a different sort of drug... My imagination suggests endless lascivious possibilities.

Alas, none of these scenes appeared in this book of the series. I’ll admit to being somewhat curious about the others.