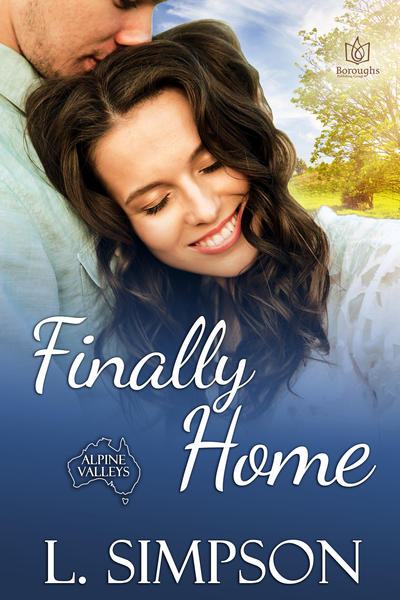 Ben McTavish is besotted when he sees a vixen in striped leggings own a cringe-worthy moment and turn it into a hilarious bit. He can’t stop thinking about her even though he puts his foot in his mouth every time he tries to get to know her. Ben would love to spend some time with this woman who has captivated him, but he needs to get his farm established before the bank takes back the land.

Kate Bloomington is all about whipping her life into shape, including getting to know her grandmother who she is now caring for. When she meets Ben, also known as Saint McT since he helps all comers, she pushes him away. Somehow, he shows up at every inopportune moment, mortifying her and enticing her at the same time. She learns that he needs help as much as she does, and together they create a love that is unbreakable.

“What’s on your mind?” he asked after I’d been standing at the kettle long after it had boiled.

“Ah…” I muttered, caught off guard and not able to come up with a ready answer. Sensing my indecision, he turned me around then lifted me onto the kitchen bench, coming to stand between my legs. In this position, I was at his height, and I appreciated how handsome he was at this angle. His hair was even more mussed than usual, and I remembered I’d had my hands in it, holding him close as he’d made me come. His eyes looked into mine, and they were open and appreciative with a hint of a smile. He wasn’t laughing at me, but I sensed he knew the direction of my thoughts.

“Tell me what you want, Kate,” he said quietly as his gaze dropped to my lips.

“You. I want you. And I want you to stay, but I don’t know what to do about it.” The words fell out of my mouth as I looked at his lips that were now giving me a sexy smile.

“You might think I’m going to put out, and I want to but I… maybe… don’t know what I’m doing. And I think you do,” I said. I didn’t see the point in lying. He could be trusted with the truth.

“Well, what happens if I say yes? Do you think I’m easy and will put out?” he murmured as he rubbed my thighs.

“Of course not,” I answered.

“And how do you know I know what I’m doing?”

“Because I’m on fire when you look at me, and when you touch me, I’m only seconds away from coming apart.”

As I said this, he sucked in a breath, like what I said hit a target he didn’t know he had.

“Will you stay with me?” I whispered right before I kissed him. It started slow and sweet, until his tongue slipped into my mouth, and tangled with mine. Then he increased the intensity. Before long I was clinging to him, needing more, desperate for contact.

As a girl growing up in Australia, Laura was lost in the world of Anne of Green Gables and Little Women. During high school, volleyball dominated her life. There had to be something positive about being 6’1” with red hair. Representing Australia from a young age she eventually took a scholarship at the University of Iowa. Living in America and being a full time athlete in a college town was an eye-opening experience and lots of fun (from what she can remember). #gohawkeyes

Returning from the States, her career took a different turn as she started working at the Red Cross and completed her Masters of Law in Human Rights. As one of the few non-lawyers in the class, her essays were far more floral than the rest, something that caused the discerning professors to shake their heads. Through working and studying, she realised there are other ways to win hearts and minds.

While she’s spent the last 14 years as an advocate against poverty and homelessness, the desire to change the world through storytelling has only got stronger. She now lives in the Alpine Valleys of North East Victoria, Australia with her husband, daughter, son, two dogs and seven chooks. When she’s not doing the whole mum thing, working at a homelessness agency, renovating her farmhouse, or trying to do laundry bleary-eyed at midnight, she is writing.

L. Simpson will be awarding $10 Boroughs Bucks to a randomly drawn winner via rafflecopter during the tour.

Welcome to Beyond Romance, Laura.

I hope the new book does really well!

Which upcoming books are you looking forward to reading?