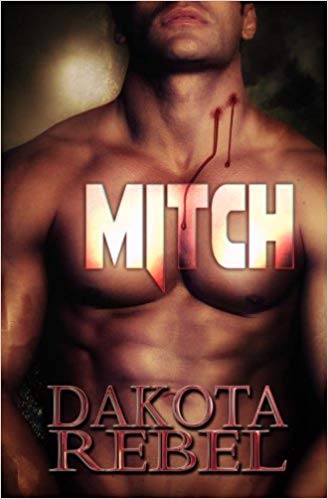 Mitchell Blaine, Federal marshal and paranormal hit man, finds himself between a rock and a hard place in this energetic M/M romance. His superiors have ordered him to kill sexy vampire Jarrod Axelrod. They've provided Mitch with hard evidence that the lead singer for the Heartstrings is a serial killer. Meanwhile, Mitch has fallen in love as well as in lust with the boyish, silver-haired rock star, and both emotions appear to be mutual. To complicate the situation, Mitch's teenage sister Reagan is smitten with Skip, the Heartstrings' vampire lead guitarist. Skip is threatening to do unspeakable things to her if Mitch doesn't break off his burgeoning relationship with Jarrod.

Mitch is a fast-paced, utterly entertaining trip through the world of its somewhat confused hero. Although Mitch is strong and smart, he's not the most mature or self-disciplined young man. He has a talent for sex and a talent for trouble – the former often getting him into the latter. He can't seem to resist Jarrod, even though he knows, better than most people, who and what the singer really is. He attempts to protect his kid sister, but she rescues him more often than the reverse.

Ms. Rebel's vampires are not cold, exotic, inhuman fiends. They are more or less ordinary people except for the fact that they suffer instant rigor mortis when the sun rises. Jarrod, in particular, is a tremendously sympathetic character, far more sensitive and insightful than the would-be macho Mitch. Like all vampires, Jarrod has superhuman strength, but his most potent ability is his power to fascinate and seduce. When he and Mitch meet at a gay club, the fireworks are instantaneous and blinding. Certainly they blind Mitch to his supposed duty as an assassin of the undead.

The sex scenes in Mitch are varied in detail but consistently incendiary. I'm not sure that I believe some of the positions that Ms. Rebel describes are possible - but then we're dealing with paranormal beings here, with unusual capabilities! The emotional connection between Jarrod and Mitch is strong and sweet, but the carnal connection is what makes their interactions sizzle.

All in all, I heartily enjoyed this book. The ending involves a surprising character shift, but offers the satisfaction of a happy ending despite the apparently impossible choice that Mitch faces. As in all serious fiction, Mitch grows and changes over the course of the book – more than you'll anticipate.
Posted by Lisabet Sarai at 3:00 AM