What is she running to? #BookBlitz #Giveaway #SciFi @edhoornaert

The author will be awarding a $15 Amazon or B/N GC to a randomly drawn winner via rafflecopter during the tour.

Check out my review of this book here.

When her abusive lover tries to take custody of her baby, Audra flees where even he can’t follow: the aliens’ forbidden cities underneath Kwadra Island.

But can the safety she wants for her daughter survive a search party, violent alien criminals—and the love of an emotionally damaged Kwadran?


The Kwadran let out a sigh before plopping to the damp ground beside her. She cringed away from him.

“Frightened, lost little cheechako. Look up there. Go ahead, look.”

No matter how she stared, though, she didn’t see an eight-foot oval ventilation shaft into the hillside. No illicit backdoor into a safe haven in the now-abandoned underworld where Kwadrans had holed up when the environment of their alternate Earth went bad.

She had no reason to play his game. Also no reason not to. “Okay, okay. I see an overgrown granite cliff. A bunch of trees, half of them dying—your forest isn’t adapting well to this Earth. Some bright red berries. A bunch of bushes. And a guy I don’t trust.”

His eyes twinkled. She was hard-pressed not to smile.

“Notice anything about the bushes?” he asked.

“They’re, you know…bushes, okay?” Stroking the downy blond hair atop Roxie’s head, Audra looked again. “I have no idea what kind they are, if that’s what you’re after.”

He waited. Though this conversation was weird, it didn’t feel threatening, so she looked uphill again.

And after several seconds, she saw something.

A hundred feet uphill, shrubs were bending to and fro as though in a stiff breeze—yet she felt no wind. Feeling like Lewis and Clark exploring the wilderness, she licked her forefinger and held it up in all directions. No breeze.

“It’s wind from the ventilation shaft’s fans!” She was inordinately pleased with herself, even though she didn’t care what this guy thought. Obviously.

The twinkle spread from his eyes to his whole face, revealing a different man underneath his impassive, unresponsive exterior. He was the opposite of Kwadra Island. Its buried cities were old and abandoned, but his buried features were young and full of life. For a second—maybe two—she was so startled by the change that she yearned to trust him. 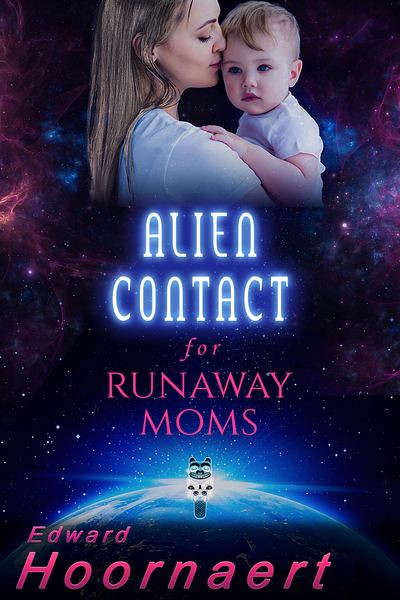 Edward Hoornaert is not only an author of science fiction, romance, and non-fiction, he's also a certifiable Harlequin Hero; he inspired N.Y. Times bestselling author Vicki Lewis Thompson to write her favorite Harlequin Desire, Mr. Valentine, which was dedicated to him. In the past, he wrote contemporary romances for Silhouette Books, but these days he writes science fiction adventures—usually with elements of romance. In addition to novelist, he has been a teacher, technical writer, salesman, janitor, and symphonic oboist.

After having 30 different addresses in his first 28 years, his rolling stone slowed in the mountains of British Columbia and stopped in Tucson, Arizona. His high school sweetheart has been his wife for more years than he has fingers and toes to count. Ed and Judi have three sons, a daughter, a mutt, and the Milky Way Galaxy's most adorable grandsons.

I hope the tour gets you the attention this book deserves!

With your help, it will get attention, Lisabet!