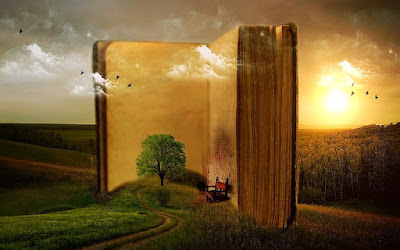 The other day I went to a big city hospital for an evaluation. It was a huge, crowded place, busy enough to be rather confusing. Everywhere on the walls were signs, telling patients where to go, what procedures to follow, which windows were to be used for submitting prescriptions, which ones for picking up XRays, which for making same-day versus future appointments, and so on.

I managed to accomplish my objectives without too much of a problem. As I sat waiting for my turn to speak to the doctor, though, gazing at all the signs, I suddenly realized how much more difficult the entire process would have been if I had been unable to read.

My parents taught me to read when I was five. I haven't stopped since. I generally read several books a week for entertainment. That doesn't include the newspapers, technical documents, research papers and professional journals I read—nor all the websites and blogs. I tend to take reading skill for granted. But my experience at the hospital reminded me that not everyone is fortunate enough to be literate.

The 2008 film “The Reader” vividly depicts the limitations imposed by illiteracy. Kate Winslet plays a woman in her thirties who somehow never learned to read. She seduces a younger man by asking him to read aloud—never revealing the true reason that she needs his services. Her shame causes her to ultimately push him away, though he loves her deeply. Being illiterate makes her life difficult and ultimately results in her being sent to prison for crimes that she did not commit. Ultimately she teaches herself to read while she is imprisoned, providing a ray of hope in what is otherwise a rather dark movie.

As it happens, today, September 8th, is International Literacy Day. This event, established by the United Nations and observed annually, is an opportunity for governments, civil society and stakeholders to highlight improvements in world literacy rates, and reflect on the world's remaining literacy challenges.

Many of us take the ability to read for granted. In many countries and societies, though, literacy is the beyond the reach of many individuals—especially girls and women. The notion of living my life without the pleasure of books horrifies me. Meanwhile, I recognize how much of a handicap illiteracy can be for someone trying to function in our modern world.

That’s why I support the charity Room to Read. Room to Read works in countries like Bangladesh, Laos, Nepal and Zambia, countries where poverty is rampant and both practical and cultural obstacles to literacy exist. The motto of this charity is “We believe that world change starts with educated children”. I couldn’t agree more.

Today, in honor of International Literacy Day, I’m making a donation to Room to Read. Would you like to join me?

Maybe you don’t have the funds to spare. That’s okay. You can help in many ways: by donating used books you’ve already read to your local library or community center; by volunteering as a tutor or mentor; by reading to your children or grandchildren.

The ability to read is a precious gift.

Meanwhile, I'm newly grateful that my parents helped me to acquire my lifelong love of reading. As I get older and I can do less physically, I reassure myself with the notion that when I'm really ancient, I'll finally get the chance to tackle all those books that I haven't gotten to yet. This may be naive, but I find the thought extremely comforting.


News flash! I just got an email from Room To Read, indicating that all donations between now and the end of September will be doubled by an anonymous donor!

Posted by Lisabet Sarai at 8:41 AM

Email ThisBlogThis!Share to TwitterShare to FacebookShare to Pinterest
Labels: charity, literacy, Room to Read, the joy of books, United Nations

"As I get older and I can do less physically, I reassure myself with the notion that when I'm really ancient, I'll finally get the chance to tackle all those books that I haven't gotten to yet. This may be naive, but I find the thought extremely comforting." Me, too, Lisabet! I've got books I've always wanted to read, but I don't have the time to read them! I sure hope retirement is all it's built up to be...including lots of time to curl up with a book!