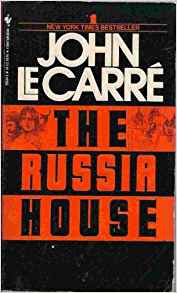 Whenever I read a novel by John le Carré, I am reminded that the distinction between genre and literary fiction is totally artificial. Le Carré is renowned for his long career as an author of “spy fiction”. However, every one of his books bears the marks of serious literature: fluid, precise and evocative prose; vivid, complex characterization; innovative narrative structures; and perhaps most important, attention to serious themes. Few authors explore the moral ambiguities of politics and society as acutely as le Carré. Furthermore, he demonstrates how these thorny issues ultimately arise from individuals, their choices and their behavior, though always in the context of the institutions to which those people are bound.

The Russia House was written and published during the years of perestroika, when the Berlin wall was crumbling and the Cold War appeared to be in a state of thaw. I expect that its insights and its irony seemed particularly cogent at that time, but even now, the novel retains its impact. In fact, in this era of polarization, fake news and manipulated identities, it seems almost prescient.

The story centers on British publisher Scott Blair, aka “Barley”, who in mid-life is a brilliant, charming, well-educated failure. Barley’s long history of drunkenness, indebtedness, broken marriages and broken promises has led him to flee England and take refuge with his latest lady-friend in Lisbon.

Kept on a short rein by the aunts who bankroll his publishing company, Barley has been a frequent visitor to Russia. The West is eager to strike deals there, in the new spirit of cooperation and openness, translating Russian gems as well as pushing previously unavailable English books. On one of his Russian jaunts, at a vodka-soaked gathering of authors and intelligentsia, Barley has a lengthy, late night conversation with a remarkable man calling himself Goethe. Although Goethe’s intellect and passion deeply impress him, Barley more or less forgets the encounter until the British spy agency ferrets him out and forces him into service.

It appears that Goethe is actually a top Russian scientist, who has written a critical book exposing the incompetence and fraud in the Soviet nuclear missile program. But in spycraft, nothing is ever as “it appears”. The explosive revelations and technical detail in Goethe’s book could fundamentally change the balance of power—increasing the chances of peace, or of war, depending on whom you talk to. The government and its minions need to know whether the material is genuine or a hoax designed to undermine the readiness of the West. Goethe trusts only Barley—he directed his manuscript to Barley, urging him to publish it, and it’s only by accident that the book ends up in the hands of the authorities. Hence Barley, mercurial, shiftless, tortured by inner demons, must be trained in espionage and sent to meet the reticent author.

This skeleton of the plot omits many complexities and a number of important characters, all of whom le Carré sketches with a deft, sure hand. In particular, there’s the shadowy figure of Palfrey, legal advisor to the British spooks, who acts as the almost invisible narrator for the novel. Palfrey sees himself mirrored in Barley; he’s the silent, conflicted observer who always takes the easy way out. Unlike Barley, he does not achieve redemption.

Then there’s Katya, Goethe’s one-time lover, who is serves as the conduit to the reclusive scientist. I will allow readers to discover her on their own.

I was struck, as I often am in reading le Carré, by the absence of rapid action, violent confrontations and feats of derring-do so prominent in modern spy thrillers. As Palfrey notes, “spying is waiting”, and spycraft is far more of an intellectual than a physical exercise. There’s violence in this book, but it’s hidden in overtly civil conversations. In particular, a scene in which the American CIA (who seize control of the operation from the more civilized Brits) administers a polygraph test to Barley made me shudder. (I am certain that was the author’s intention.)

One of the delights in this book is the author’s rich portrayal of Russia and the Russian people. As they deal with shortages, crumbling infrastructure, corruption and fear of State repression, they remain resourceful, brave, warm-hearted and sociable—even idealistic. It’s clear that le Carré has deep knowledge of, and abiding love for, Russia. The British characters fare more poorly, and the Americans worst of all.

I greatly enjoyed this book. It also filled me with new admiration for its author. It’s far more than just a throwaway piece of genre fiction.

I would really love to see John le Carré get the respect he deserves.

I love le Carré best in the spy genre and have read just about every book - well, most of them. At the moment I'm reading The Honourable Schoolboy(very slowly indeed since almost two months, mainly because it's set partly in Hong Kong, another place on our beautiful earth that I've stayed at and loved!

With a le Carré, I know I'm going to read the kind of English I understand!