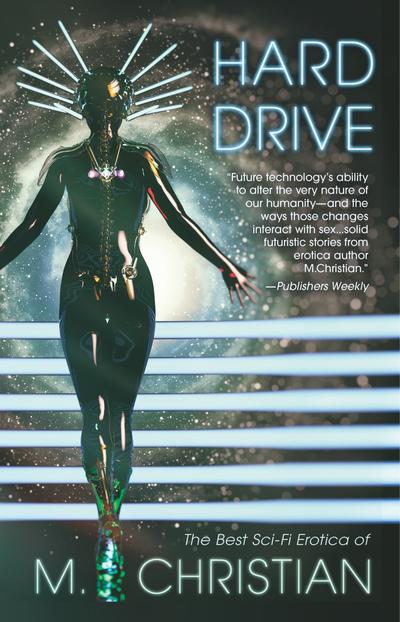 We’ve read and reviewed each other’s work over the decades. He has edited my stories for his collections; I’ve done the same for him, including his single author altruistic erotica volume Coming Together Presents: M. Christian, which supports Planned Parenthood 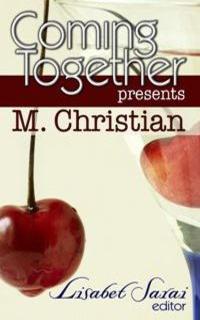 So I can’t really claim to be objective when it comes to M. Christian. He’s not only a valued colleague, but a friend.

Still, you should believe me when I tell you this book is a treat. Hard Drive collects the best of his speculative erotica tales, a genre that’s one of both his favorites and my own, published over his long career.

Here’s the blurb—a bit breathless, but accurate never the less:

His follow-up collection, Skin Effect, raised it even further: a book that Publisher’s Weekly praised as “Future technology’s ability to alter the very nature of our humanity—and the ways those changes interact with sex—shapes this solid collection of futuristic stories from erotica author M.Christian.”

Now M.Christian has personally selected his favorite stories from The Bachelor Machine, Skin Effect, and his other erotica collections to create the ultimate celebration of sexually-explicit cyberpunk science fiction: Hard Drive.

And here’s an excerpt from “State”, possibly the best piece of sci-fi erotica I've ever read. The main character is a human woman impersonating an expensive humanoid sex robot. In the world of this tale, robotic sex is a more valuable commodity than flesh-on-flesh. The protagonist finds her masquerade a personally arousing challenge.

The streets, and common knowledge, said that Autos took a while to power up, boot up their software, get their circuits warm and ready, though never really willing: the perfect love-doll. The perfect toy. The real fact was that it took Fields time to get completely into her Act.

Her friendly gray robe went first ... into the hidden closet behind the false wall of phony, blinking telltales and dummy flat-screens playing loops of technical gibberish, with the rest of her reality, hung on a hook next to her vid discs, street clothes, wigs, pills, towels, creams, sprays, and plain-faced bottles of special dye.

Very special dye; an incredibly durable, bonding polymer that she applied each morning; but she was always careful to examine every inch of herself in a roll-up plastic mirror, lathering on the thick blueness at the faintest signs of her real pinkness, before the light over the door flashed green. Her hair, every brown strand, was months gone and kept at an imperceptible level by a chilling spray of tailored enzymes. Sure, she could wear any of her wigs, and sometimes did for those who just couldn't deal with a too-inhuman Automaton, but for the most part, she liked going smooth and streamlined: you paid for a machine.

The little yellow hexagon pills still had about another two hours to go – her skin texture and temperature would be just that different. Not quite human, almost machine-synthetic. Anyone, of course, who knew the real Mitsui would know the reality of pink skin-and-blood Fields under the blue, behind the contacts, beyond the re-engineered body. But then the Autos were very rare, their legends and rumors huge … and who would know the real thing after all, in the dim shadows of big, sprawling, bad Kyushu?

Fields's body was a gift from Mama. Really, an investment: those long days, two years ago with the Osaka Scalpers, had taken what nature had lucked her with and shaped her into an almost perfect Auto Class B – still one of Mitsui's most popular models. Strong shoulders; round face with high, almost too-wide-for-nature cheekbones; tiny, pert, full lips; huge, crystal-blue eyes; high, wide, and moderate tits, huge against her small actual frame, with aggressively large nipples. Some of it was really hers, some was machine-made for her machine Act. Her looks, real or made, would be good and profitable as long as the real unit was state-of-the-art ... and the rumors of how good, and how hot, kept flying.

Fields's cortical jack was a gift from Sammi, now long gone. His gift of matched wet dreams through cheap Kobe scalp implants was also gone. One quick brain-trip with the tall and lean New Tokyo hustler had been enough for the preteen Fields (spasms of her riding him, his impression of "nothing-but-sex nothing-but-sex" and her always on fucking top, running/stomping all over her images of that one time – that one good time – at that Osaka shrimp stick stand when he had just smiled at her oh so special); the jack was the one and only thing that really remained of him. It was important to the Act, so she kept it polished and in good repair. The clients knew (if they knew anything) that no one had shrunk the hardware for the Autos enough for them to be self-supporting. They expected and got her – Regulation Blue, hairless, eyes also blue but also no irises, just slightly cool, perfect little ass, perfection tits, and trailing her braid of cables: a love-doll lifted from a Japanese collective consciousness, a manga sex-toy – all eyes and ass and tits and mouth and cunt. Pure fantasy, rolled off the assembly line to a male libido's factory specs. Her body was flesh, tricked by drugs and chemicals – the jack on the crown of her head was real, the line was dead, but she was still State: the perfect whore, the perfect trick, perfect in her Act.

Hard Drive: The Best Sci-Fi Erotica of M.Christian
is available on Kindle from Sizzler Editions (free on Kindle Unlimited).

A print edition is coming soon.

M.Christian has also become a celebrated sexual futurist, both through his novels and short stories as well as being a Senior Columnist for Future Of Sex (https://futureofsex.net), which provides "insights into the fascinating topic of the future of human sex and sexuality."