Out Now – In Bed with the Enemy, Undercover Lovers: Book Two by Ellie Barker (@sinfulpress @EllieBa3) 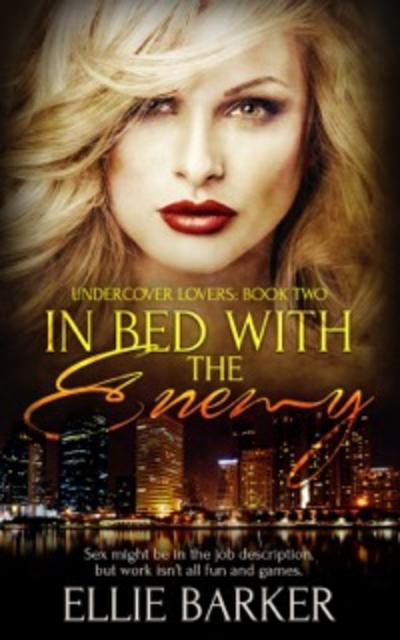 In Bed with the Enemy continues the story of Nikolas, a bisexual police mole, and Sky, a transgender thief, as they work to infiltrate the local crime syndicate. Ellie Barker has created a fast paced and highly entertaining trilogy, with a diverse range of characters, various sexual encounters, and unconventional romance. Secrets and Spies, the first in the trilogy, was released in May 2018, and For Queen and Country, the remaining book in the trilogy, is due for release on July 13th 2018.

In Bed with the Enemy is Amazon exclusive for a limited time before being released across all main platforms. It is available to read through Kindle Unlimited.

Nikolas Jinsen, police mole and mafia odd-job man, is given an ultimatum; stop seeing his girlfriend, or lose his job. When a hasty attempt to keep both goes wrong, he does the only thing he can think of: he lies. But with his new roommate a member of the elite gang that Nikolas has been tasked to look into, and his assignations with his girlfriend constantly interrupted by calls on his services as a lover, Nikolas finds that work isn't all fun and games.

I pulled out my phone.

Bear answered within two rings. “Nikolas! This is a pleasant surprise.”

“I changed my mind about that nightcap, if the offer’s still open,” I told him.

“Why the change of heart?” He sounded a bit surprised.

“I can’t stop thinking about you.” And actually, it was true. I wanted to know what he was like in bed. How far down that beard went. What was under that suit. What he looked like when he came.

“I thought you didn’t do one-offs?”
“Sky wants to hear all about it afterwards.”

I heard the bellow of laughter down the phone, and then he came back on the line, still chuckling. “Well, I can’t disappoint her, can I. When?”

Forty-five minutes later, I was getting out of a taxi at the foot of a tower block. Ten minutes had been picking up a bottle of wine that I liked, wondering if he’d like it, checking with Sky—who told me she didn’t have a fucking clue and I’d just got her killed, which meant she was playing something with Benny—and going back to my original choice. And now I was here, looking up at the lit windows above me and thinking about Tanya’s exhibitionism.

I’d wondered about getting a hotel room, but Bear had invited me over and I’d accepted. It meant if there was a trap I was walking into it, but then a hotel room had a veneer of anonymity that I didn’t necessarily like. Sky knew where I was going, and had offered to come and rescue me if needed—and that meant she could potentially bring both the Queen and Tanya’s resources down on someone’s head. Tanya Mardos didn’t care about much in the world, but I figured she’d probably have something to say if her current sex toy wasn’t available on demand.

And so I headed for the main door and pushed the button for the flat intercom.