If this excerpt moves you, consider bidding in the charity auction to save threatened gay men in Chechnya. I’m offering two autographed print copies of this provocative book.

Meanwhile, when you’re finished with this post, head back to Smut Sunday Central for more sexy, smutty fun! 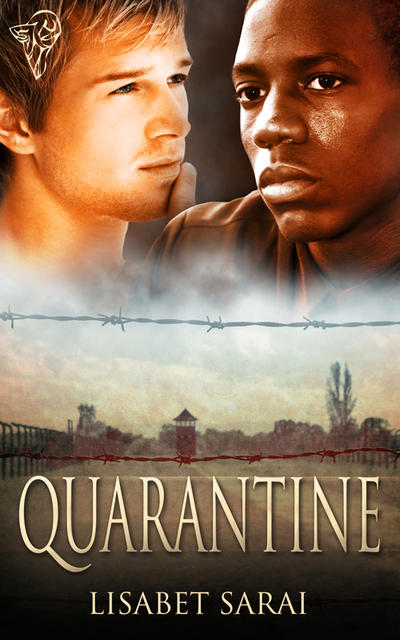 “I know you watch me,” Dylan answered, all the brashness gone from his manner. “Well, I watch you, too.”

“How…?” Rafe slid his fingers into Dylan’s reddish thatch and raised the inmate’s eyes to his own.

“Easy. I programmed a guard to change the video routing. To feed the stream from here to the screen of my controller.”
So there were spy eyes in the control room, after all. “No…”

“Yes. You know that hard-on of mine that you enjoy watching so much? That’s for you, man. When I jack off at night, I’m thinking of you.”

Rafe’s mind reeled. He snatched his hand from Dylan’s hair as though he’d been scalded.

“Unlock the cuffs, man. Let me touch you. Let me show you how much I want you.”

“Shut up, faggot!” The key burned a hole in his palm. His rigid dick strained against his zipper. He was tottering on the edge of a precipice, tempted to jump. Tempted to give in, to release the rash young man who’d delivered himself into Rafe’s hands.

But that would be suicide. The penalties for breaking quarantine were more severe than for murder.

The pressure from his boner made it difficult to undo his fly. When he finally managed to work the zipper down, his cock burst from its prison, bobbing like a fat black sausage in front of Dylan’s hungry eyes. Moisture welled up from the slit. Dylan licked his full lips as though dying for a taste.

“Ah, yes…” the prisoner sighed, leaning forward and reaching out his tongue.

Rafe didn’t answer. He grabbed the back of Dylan’s head and plunged his dick into that wide-open mouth.

Heat. Wetness. The firm pressure of a muscular tongue, kneading his pulsing flesh. The tight seal of those ripe lips locked around his rod. Rafe struggled for control. The sensations that flooded him threatened to set him off before he even got started. He pulled back, popping out of Dylan’s mouth. The other man moaned in disappointment. Rafe drilled back in, hard and fast.

He slammed his cock down Dylan’s throat, feeling the bulb graze the palate. The man on his knees choked on the invading bulk. This time Rafe didn’t relent. He jerked his hips, driving his cock even deeper.

He felt Dylan surrender, giving up all pretence of will or control. The muscles spasming around his rod relaxed. The jaw went slack. Again and again, Rafe buried his dick in that brazen, laughing mouth, bruised and drooling now under Rafe’s assault.

In. Out. In. Rafe stepped closer to the kneeling inmate so that he could thrust deeper. His climax was on a slow burn now, building with each stroke. He could fuck this raw, sweet mouth forever.

He was too far gone to stop, though. The hot pleasure dancing in his flesh made him generous. Let the twink come, he thought. As if in answer, Dylan rubbed his crotch against Rafe’s knee awkward because of his bonds and the inescapable cock plundering his mouth.

Dylan’s cock pulsed. Rafe pulled away at the last instant, not wanting evidence of their games to stain his trousers. Dylan moaned as convulsions shook his body. Gradually he stopped shuddering. He sank back onto his heels, Rafe’s semen dribbling from the corners of his half-smiling mouth.

Bid for a signed copy here!
Posted by Lisabet Sarai at 6:07 AM