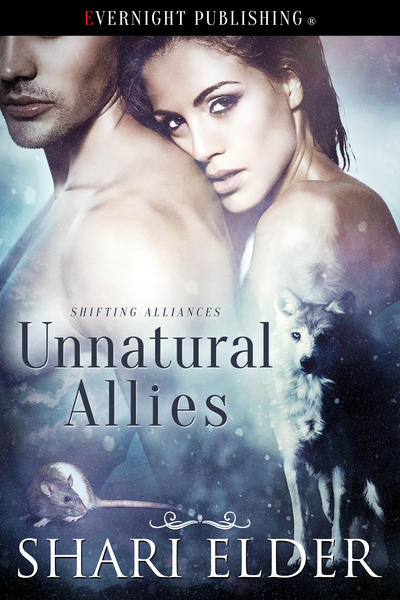 Have you ever walked into a restaurant, in a house, or just down the street when a smell tickles your nose, your stomach grumbles louder than a rock band, and your mind fixates on food? When there’s not a granola bar or several sticks of gum nearby to calm the cravings, do you design ever more elaborate meals to feed those hungers?

In my latest paranormal romance, Unnatural Allies (Shifting Alliances #2), Nicca, my wolf shifter is held captive by a insane fae woman, who casts a spell that prevents her from shifting. Trapped in human form, worried and hungry, she goes a little crazy with the meal planning. I didn’t mean to write this part in, but it took over my brain, and gave me immense pleasure to put it to the page. Since food is another sensual pleasure, I thought it would be fun to share what Nicca created. They are all so scrumptious and provide ready-made meal plans the next time you invite a shifter for dinner.

Once I started down this track in the story, I couldn’t stop the ideas from flowing. That’s a bit how the book itself came to be. I had written Shifter Trials (Book #1 Shifting Alliances) as a stand-alone story. Nicca and the hero, Evan, were secondary characters. Once I started with them, I couldn’t stop. I’m happy to introduce Unnatural Allies, a love story between a rat alpha and a wolf beta and food is actually a problem. Thanks for dropping by.

A World in Transition

Violent fae encroachment on shifter land is heating up. With death tolls rising, the impossible becomes necessary – an alliance among predator and prey shifters.

Nicca Baron, lone wolf and wolf clan beta, finds herself under the command of Evan Grant, the rat alpha. In different circumstances, he’d be dinner. Or so her wolf keeps reminding her. Evan proves to be a perceptive leader, a skilled fighter and irresistible to her lonely heart.

To rule the rats, you have to rule the pack. Evan is a whiz at managing people and groups. Until he finds himself leading a mission made up of every single large animal that thrives on rat flesh. And not the kind between his legs. The only bright light is Nicca. Her storm gray eyes miss nothing, her brilliant mind comprehends everything and her succulent curves offer the perfect place for a rat to nestle.

In each other’s arms, Nicca and Evan discover love and a new perspective in an off-kilter world. But a wolf cannot mate with a rat, no matter the strength of the human attraction.

Evan had never seen Nicca look frightened before. Those silver eyes expanded into saucers, and they were still beautiful. He wanted to wrap her in his arms, just hold her close as they both tried to process a world spinning out of control. Even his rat wanted to comfort her.

She was getting under skin and fur.

The last leaves hung limp on the branches, resisting winter’s pull. Away from the sidhe, the air had warmed, although the sky retained a grayish winter hue. Shifter bodies held heat, keeping them comfortable in the most brutal frost. Evan burned hot from continuous movement, the too frequent adrenaline spikes, and Nicca’s nearness. Everything about her fit, like she was made for him. That agile mind, open-mindedness, those lush curves. Hell, she even spouted poetry. He yearned to put a sign around her neck—no trespassing, this woman belongs to Evan Grant.

Except for that whole wolf thing…

“Why don’t we find a comfortable place to set up camp near Fairy Falls and call it a day?” he said to get his mind back to practical things, not wishing for something he couldn’t have. He told himself he selected the location as part of the mission. All species declared the pristine, wild falls a safe zone, so they wouldn’t need the wolves or eagles to stand guard. The fact that it was the number one rated site for shifter romances had nothing to do with the selection. Nothing at all.

No one would ever accuse Nicca of talking too much, but she was withdrawn even for her on the hike to the Falls. “Any suggestions on places to sleep?” he asked when her silence got too loud for him.

“I’ve, uh, never really been here,” she whispered, looking at the ground. “Just run by it on patrols sometimes.”

“And that makes you sad?” He itched to run his hand down her cheek.

“This mission makes me sad.” Her gaze stayed lowered as she walked.

His rat senses perceived a deep despondency wrapped around her like a black aura.

“This mission makes you angry, anxious, and confused. Not sad.”

“Who are you to correct my assessment of my emotional state?” She gave him a half-hearted snarl. He figured he’d hit an open, raw nerve.

“I lead this mission, and I will not have you fall apart on me. Right now, you are not okay.” He opened his arm, aping Rafe’s earlier action, inviting her to him to take comfort. “Let me help.” Let me touch you.

She visibly shook herself, ignoring his outstretched limb. “You’re right. I need space. Let me run as wolf.”

He dropped his hand, then nodded to cover the ripping sound his heart was making. “Stay close,” he said over the lump of disappointment lodged in his throat. “Give me your backpack, and I’ll find a place to sleep. Meet me at the falls when you’re done.”

Relief brightened her eyes. Once shifted, she brushed against his leg, then licked at his hand dangling by his side. He ran his fingers through her thick, gray fur touched with black and silver as she trotted off. “Grab some happy, Nicca,” he said into the air, as she raced out of sight. Come back to me. Accept me.

Alone, he hummed as he walked toward the falls. The low tune soothed his skittish rat, who hated being alone and wasn’t too fond of the woods. Rats felt secure in the pack. The human in him appreciated the red gold of the sunset streaking across the powder blue of the sky, weaving in and out of spiky, hunter green firs that ate up the landscape. Beauty truly did soothe an aching heart. The whirr of winter birds, a chorus to his ears, unnerved the rat. He picked up his pace, following the smell of ice and the roar of the falling water.

When he arrived at the falls, he saw Nicca standing at the edge of the descending water, running her fingers through the stream. That sadness he’d sensed earlier scented the air and dulled those unique gray eyes. Following a powerful intuition, he approached quietly, staying upwind so she wouldn’t notice until he stood directly behind her. She may have rejected his offer of support earlier, but he was determined to try again. His way.

She turned to face him, and tilted her head up to meet his gaze. He pushed behind one ear a lock of hair that was draped along her cheek. The tresses felt like silk, the skin velvet against his fingertips.

He leaned over, touching lips to lips ever so gently. Giving comfort. Sneaking a taste. Exploring what might be. She pressed back, her mouth opening slightly beneath his. He sank into cherry and cinnamon, shyness and heat. She didn’t require a friend; she needed a lover. He desperately wanted to be that man.

He pulled back, falling hard for the blush staining her cheeks a bright pink.

“Follow me,” he said, taking her hand, and led her to the camping spot he noticed along the way.

To love a wolf.

Hello, I'm Shari. By day, I crawl out of bed, mainline coffee, walk the dog, get my kid off to school, hop on the metro, and save cities within the four walls of my office. Usually by email.

At night, the other Shari emerges. I take off the suit, curl up on the couch and let my imagination play, with words and images until stories take shape (while periodically checking on my teen-ager, hiding out in the bedroom and plotting world domination with her furry minions).  As my alter ego, I save cities in a cape and spangled tights, wander space and time on a surfboard, fly over the Himalayas on feathered wings, make six-toed footprints in indigo talc snow on the sixth planet in the Andromeda galaxy or eavesdrop on Olympian gods while pretending to whip up a bowl of ambrosia.

In all these wondrous worlds, romance and passion blossom. I can't resist a happy ending. And I am particularly prone to writing happy endings for those who have given up on ever getting one. That gives me immense satisfaction.

Join me on my journey. The best ideas emerge from team work.

Hang out with Shari on the Web

Welcome to Beyond Romance, Shari!

A rat and a wolf! What a wild idea! Sounds like a great book.

Meanwhile, I was setting this post up before I'd eaten dinner and I have to say... you had my mouth watering!

Thanks so much for hosting me.

I hit publish to early. I couldn't resist the idea when I thought of it. I love to push boundaries. Love being here.