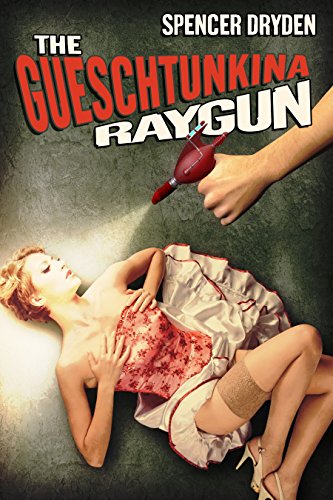 Can a mild-mannered PhD student save humanity from a terrible future of domination by sexually frustrated females?

Just the premise of Spencer Dryden’s newly released short story, The Gueschtunkina Ray Gun, makes me smile. The book itself had me laughing out loud.

Alex Bennet is a typical grad student—living in a cheap apartment, surviving on burgers and beer, slaving away for the professors who hold his fate in their hands. When a midget-sized visitor from the future materializes in his one-room efficiency, claiming that only Alex can prevent the disastrous collapse of human society, he’s inclined to be skeptical. However, one test of the Gueschtunkina Ray Gun provided by the time-traveler is enough to change his mind.

The gun has the power to engender overwhelming sexual arousal in any woman subjected to its rays. Alex is the beneficiary of this transformation, much to his delight. Still, while overcoming the resistance of an already-flirtatious waitress might be straightforward, what are Alex’s chances of seducing the most frigid, ball-busting woman on the planet—fellow academic Dr. Lilith Bendershoot? Yet that’s his assignment. Lilith holds the keys to the decline of the human race. If Alex doesn’t soften her up, the male of the species is doomed to shriveled impotency and the female to millennia of sterile authority.

This story is darned near perfect. It’s clever and original, while demonstrating Spencer Dryden’s signature adoration of everything womanly. When I’d finished, I wished there were more; yet making the tale any longer would have spoiled it.

Thanks Lisabet: The next two installments will be longer but wackier-provided I ever finish them.

Oh, this sounds like a lot of fun - great review!

Another new to me author! This Spencer Dryden dude . . . I read his Goodreads bio and that had me laughing loudly. The review of this story intrigues me and the story is now on my list. Thank you.

Pansy, Spencer is an old friend and former blog mate of mine. I love his stuff. He's romantic and funny and REALLY loves (and respects) women. You might like his previous novella, The Memory of Mermaids.