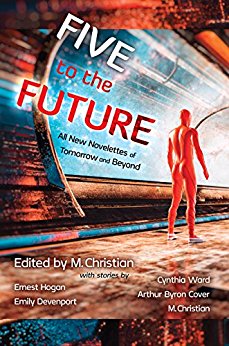 Five to the Future: All New Novelettes of Tomorrow and Beyond

Science fiction was one of my first literary loves. I remember borrowing Heinlein and Bradbury from our local library when I was only seven or eight. That love has endured into my sixties. Even though my “official” genre is erotica/erotic romance, probably twenty percent of what I read could be labeled scifi or speculative fiction.

Hence, I was thrilled when I learned that M.Christian had edited a brand new science fiction anthology. I cannot claim to be an unbiased reviewer; I adore his speculative stories, at least one of which (“State”) has a permanent place in my pantheon of the best short stories of all time.

Five to the Future offers a creative playground for a handful of acclaimed science fiction authors: Ernest Hogan, Emily Devenport, Cynthia Ward, Arthur Byron Cover, and Christian himself. In his foreword the editor notes that he gave only contributors a single instruction: write whatever story you want to write.

The results are impressive, thought-provoking, sometimes funny, and uniformly entertaining.

Ernest Hogan offers “Uno! … Dos! One-Two! Tres! Cuatro!”, a Latin-flavored riff heavily influenced by recent U.S. politics. His characters are the outcasts, outlaws, artists, and mystics who live in the Unsecure Zone of Metro Phoenix, some time in the not-so-distant future. Sexy Gonzomedia commentator Cha-cha Chavez is on assignment to bring back the truth (not alternative facts!) from beyond the Wall. In her quest she encounters the infamous low-rider Xolo Garcia, his jealous matador girl-friend Cihuachichi and a range of other characters who are keeping the fires of creativity and diversity burning despite the bombers flying overhead.

Extravagant imagination and tongue-in-cheek humor characterize this outrageous piece. There are more serious messages as well, but they’re delivered with such aplomb you might not notice.

Emily Devenport’s contribution “Queen of the Cats” was my favorite in the collection. Deeply emotional and more conventionally structured than the other tales, the story chronicles an invasion by a race of attractive aliens so shallow in their desires that you’ll wince at the familiarity. The narrator of this story loses her husband, who is disintegrated by an invader wanting the man’s clothing. She maintains her sanity and humanity by caring for the many cats left without owners after the advent of the extraterrestrials. The tale skirts the edge of apocalypse, but has a unexpectedly uplifting conclusion.

“Follow Your Dream” by Cynthia Ward is a delightful love-letter to Japanese super-hero anime. Don’t expect muscle-flexing wrestlers or sentient robots, though; every one of Ms. Ward’s in-your-face characters is female.

Arthur Byron Cover aptly titled his tale “Dreamweaver”; it has the bizarre logic of dreams. His contribution is a hallucinogenic mélange of shifting realities, grounded by a surprisingly affecting romance. I didn’t completely understand what this author was trying to accomplish, but his ferocious imagination and vivid imagery dazzled me. Like Ernest Hogan’s tale, this one includes quite a bit of humor, but it left me feeling a deliciously bittersweet melancholy.

“Written on Ribs” is the editor’s offering. The background for this story lies in the practice, during the Cold War, of smuggling Western music recordings into the Soviet Union by imprinting them on discarded X-rays. The piece is actually an assembly of mini-stories, each one inspired (I gather) by tales published during the Golden Age of science fiction magazines. I’m not sure how much I missed due to my unfamiliarity with these historic stories, but M.Christian’s vignettes about art, power and desire don’t seem to require this knowledge in order to have a profound impact. More than any of the other contributions in this volume, “Written on Ribs” shows a sort of disciplined craft that kindles deep admiration. In the final vignette, the author himself shows up as a character, effectively asking whether we writers are ever truly separate from our creations.

Certainly, it’s clear that the authors in Five to the Future all poured their souls into their stories. Each one shines with imagination and passion. One of the wonderful aspects of science fiction is that it imposes no limits. These authors have taken advantage of that freedom to produce a book that’s both entertaining and moving.