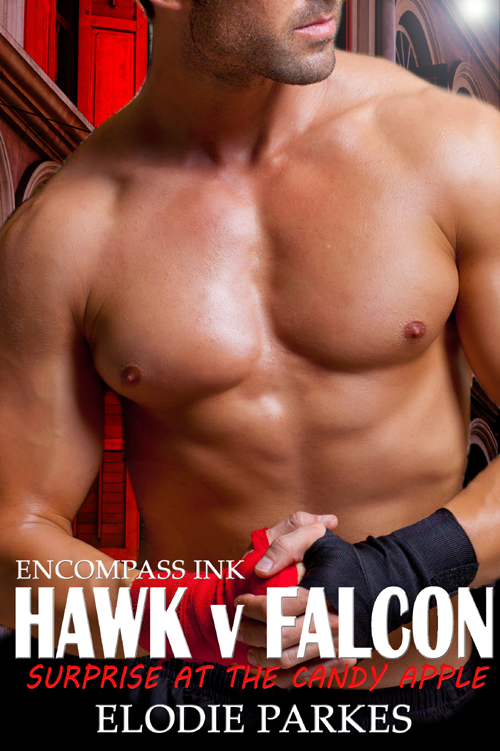 Thank you for hosting me as I share a bit about my new release,
Hawk v Falcon: Surprise at the Candy Apple.

When Chris Falconer receives an email from his lost high school friend, Justin, ten years after he last saw him, Chris is overjoyed. The two boys had shared kisses and sworn love for each other, but before their love could be tested, Justin’s mother abruptly took Justin out of school, and they disappeared.

Multi-talented and handsome Chris is a cage fighter at Jack’s Clubhouse, and works in the Candy Apple club. He writes a column for a fitness blog and keeps himself busy, but deep down he’s never forgotten Justin—turns out Justin has never forgotten Chris either.

On a modeling assignment in New York, Justin sees Chris in a café and can’t help contacting him, but his ex, Todd, who doesn’t want Justin but doesn’t want Chris to have him either, has plans to throw their reunion into disarray.

So begins a love story full of emotion. Will Todd succeed? Or this time, will Justin and Chris have the happy ending and delicious love they deserve?

In the second MM romance from the Candy Apple series, I picked up on the character Hawk, the Dungeon Master in the Candy Apple. Chris Falconer is Hawk to the dungeon surveillance staff, but to others he’s a lonely man who often thinks about his past with regret. To the audience at Jack’s Clubhouse, where Chris cage fights and provides display fight bouts, he’s a thrilling sight.

Chris is: six foot two; has dark glossy hair; has deep blue eyes; is kind and gentle; loves sex and giving his partner pleasure; is muscled and handsome; is intelligent, multi-talented, calm and sophisticated. When he’s not fighting, he favors black suits, or a leather jacket; 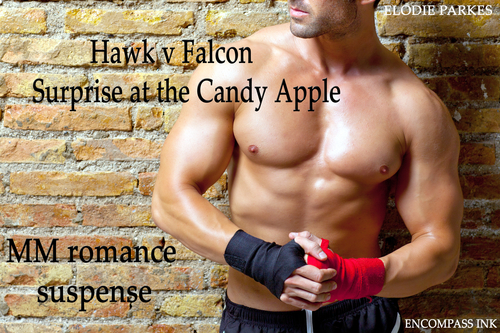 Justin is: a fashion model; six foot two; has dark hair; has clear blue/gray eyes. Justin is lonely and had a stressful upbringing. He has never forgotten Chris, and needs his love. Justin has lived in Denmark for many years. He is hesitant and yet as soon as Chris begins to take care of him, he blossoms. 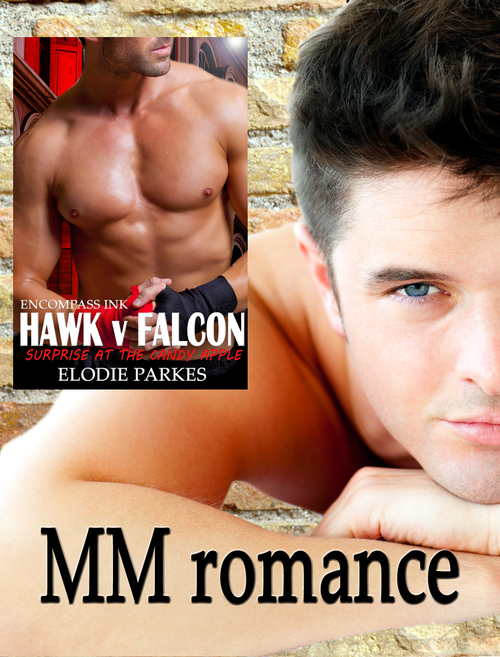 Their story is sexy, romantic, sad, and happy. No one is more surprised than Chris when he is contacted by long lost love Justin and he will do anything to give Justin the love he needs.

Justin walked a pace behind Chris. It was such a relief to be near Chris, Justin’s fatigue threatened to overwhelm him. Every muscle in his body felt heavy. His gaze traced the broad shoulders and muscled thighs of the man in front. Chris’s hair was well cut and his suit obviously expensive. Chris was even taller than he’d been when Justin last saw him in person, but then so was he. Justin smiled as a wave of tenderness crept over him followed by a sharp need to feel Chris’s lips on his. He still loved Chris. He’d expected to find it was all in his head, that the love was confined to memories, and real life would show him he was mistaken, that love couldn’t last this long.

They were in a corridor when Chris turned to him. “I’ve thought about you so much, I’m a bit ashamed of myself for clinging to your memory, when you never called, when you just disappeared.”
Justin’s heart fell. Was Chris about to reject him now they were away from the bar, the friendly barkeep, and bright white glow of the downlights there? “I’m sorry...”

“No. I meant ... I mean I still care for you. I couldn’t ever shake it. I never got over you and it’s been ... it’s been so long—you know I sometimes felt weak for not letting go.”

Justin gazed at Chris’s handsome face. “I thought about you.” He slid his hand along Chris’s jaw. “I want to kiss you, so much.”

Chris closed the small gap between their bodies as he grabbed Justin’s head and brought his mouth down on Justin’s. Justin’s breath left him in a soft murmur. His eyes closed in pleasure. He clung to Chris, desperation to stay with Chris, never to go home, gripping him. All he could think of was starting again with Chris, of the delicious drifting sensation that overcame him as Chris pressed close. He kissed Chris over and over until he couldn’t breathe, and Chris held his face away a little whispering words he’d longed to hear against his mouth and dotting tiny kisses there between the phrases.

“Justin, stay here, in the club. I can’t let you go, but I can’t leave work. I still love you. I want to know where you’ve been all these years. Where do you live? You must be a club member. I’ve not seen you here before. Can you stay until we close? It will be late, but then we can talk—we can be together.”

Justin closed his eyes and leaned his head on Chris’s shoulder. “Yes.”

Chris folded Justin in his arms.

Justin stayed within the comfort of the embrace until he knew he had to let Chris get back to work. He raised his head and stepped away.

“I should let you work. I’ll hang out at the bar.”

Chris gazed into his eyes. “Thank you.” He kissed Justin gently. “Hell, you’ll never know how good it feels to kiss you again.

Love Unmasked: At the Candy Apple 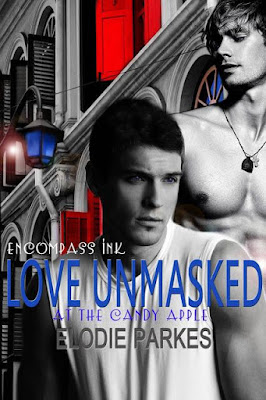 Handsome Tom Wells sets lonely Scott Palmer’s heart racing as he watches Tom come and go from his apartment across the street. Scott longs to meet Tom, and when he scores a new job delivering goods for a local distributer, fate hands him the opportunity.

Tom works in a nightclub—the Candy Apple, and in the sultry environs, a masked stranger seduces Tom. The seeds of passion are sown, but just who has ignited Tom’s passion?

Scott’s longing to know Tom leads him to join the elite nightclub.
On his first visit, the club holds a masquerade event.
Who is kissing who? Who’s under the black velvet mask?

I’m a writer who is in love with happy endings. Currently based in the UK but thinking about joining the next flock of birds I see heading south for the winter.

I work with antiques by day and words by night.

Like a vampire, darkness is my friend, that’s when the silence is only broken by an occasional hoot of owls in the woodlands opposite my home, and I write.