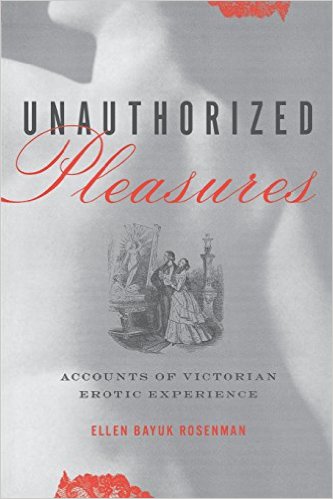 
The Victorian era has long been a favorite milieu for authors of erotica, due to the juxtaposition of oppressive public morality with private lechery. In any setting, the breaking of taboos and undertaking of forbidden actions elevate the level of sexual excitement. With so many restrictions on sexual expression, it is hardly surprising that the Victorian period offers many opportunities for creating a sexy story.

In Unauthorized Pleasures, Ellen Bayuk Rosenman argues that the true situation was not this simple. A set of five loosely-connected essays that closely examine texts from the mid-Victorian era, Unauthorized Pleasures highlights surprising ambiguities in Victorian attitudes toward sex and gender. Officially, Victorians were supposed to deny themselves sexual pleasure. It was something to be feared and avoided, a deadly temptation that would lure them to physical, moral and social ruin. In actuality, sexual urges and behaviors were transformed, displaced, cloaked in the guise of aesthetic appreciation, romantic virtue, or even scientific inquiry.

In her first chapter, Ms. Rosenman explores the social-sexual consequences of the imaginary disease spermatorrhea. Spermatorrhea supposedly afflicted men who indulged too frequently in sex, particularly masturbation. It was characterized by loss of potency, "leaking" of bodily fluids, general mental and physical debilitation, and ultimately, death. Men's anxiety about sex led to a veritable spermatorrhea epidemic in the 1850's and 1860's. This "epidemic", in turn, gave rise to a generation of medical practitioners who inflicted truly awful therapies on their unfortunate patients. Ms. Rosenman points out, though, that these interventions often involved the doctor handling the penis, testing its erectile capacity, anointing it with various noxious or stimulating compounds, or confining it in apparatus highly reminiscent of modern SM paraphernalia. She postulates that both doctor and patient achieved some sexual pleasure in the course of these treatments, homoerotic titillation that could safely be dismissed as "necessary" and "scientific".

The second essay explores the rampant exhibitionism and voyeurism to be found on the crowded streets of Victorian London, analyzing both fiction and the personal journal of a self-avowed woman-watcher. The superficial dynamic of man as the subject, author and owner of "the gaze", and woman as the passive object, turns out to be complicated by woman's active role in presenting herself and attracting the man's vision and admiration. Ms. Rosenman exposes a deep concern in Victorian men, a fear that they will be misled by appearances and seduced into passion and destruction by those who appear to be "ladies" but who are not. At the same time, the potential for such a passionate fall lends excitement to the game of woman-watching.

Chapter 3 is devoted to the novel THE MYSTERIES OF LONDON, by G.W.M. Reynolds, a contemporary of and competitor to Dickens. Although practically unknown today, this massive work was hugely popular in its time and had significant influence on the thought and writing of its period.

What makes TMOL noteworthy, in Ms. Rosenman's opinion, is the fact that it portrays its female characters as enjoying sexual pleasures, without suffering the fateful punishments Victorian literature usually reserved for "wanton women". Reynold's women, however, experience this pleasure in isolation from any male intervention -- in gazing at their own beauty, or enjoying the physical satisfactions of dancing, or striding freely through the streets wearing male clothing. Thus, TMOL stimulated its readers (many of whom, Rosenman asserts, would have been female) but in a safe context. "They could enjoy both the thrill of transgression and the reassurance that moral standards still held -- and that they need not be wholly ashamed of their reading."

Chapter 4 discusses the fascinating, true story of the Yelverton marriage case, in which Theresa Longworth, a middle class woman of reasonable breeding and extensive education who might or might not have been Charles Yelverton's mistress -- or his wife -- successfully harnessed the sexual stereotypes of her time in order to win over a jury in her breach of contract suit. Once again, Ms. Rosenman chooses this incident not only for what it reveals about the times, but also because of the enormous volume of publicity and derivative fiction that it generated. To me, the most intriguing aspect of the tale is the ultimate fate of Theresa Longworthy. Although she finally lost her case against Yelverton, and remained unmarried, she transformed herself from a fragile woman wronged to a published author, world traveler and adventuress, roles that were highly unconventional for her time.

Ms. Rosenman ends the book with an in-depth treatment of MY SECRET LIFE, the magnum opus of Victorian erotica. She refutes many of the claims that have been made about "Walter's" exhaustive sexual memoir, highlighting his interest in communicating verbally with his partners, his openness to homosexual activities, and his boundless enthusiasm for sexual experimentation. At the same time, she illustrates how firmly Walter's exploits are embedded in the class structure of Victorian society, even though his attitudes toward female sexuality seem to be more enlightened than most of his contemporaries.

Unauthorized Pleasures is engaging, at times fascinating. It is not, however, light reading. It is a scholarly study replete with footnotes and refutations of colleagues' literary theories. The emphasis appears to be on debunking various tenets of current feminist criticism. Since I am not familiar with the authors that she challenges, I cannot comment on the effectiveness of Ms. Rosenman's endeavor in this area.

What does shine through is the author's determination to give the Victorian period, and its literature, a fresh look, to discard the stereotypes and try to allow the texts to speak for themselves. In this regard, she is quite successful.

If you are seeking titillation, this is not the book for you. If, on the other hand, you are intrigued, as I am, by the riddle of Victorian sexuality, you may find the rewards of reading Unauthorized Pleasures worth the work. Having published an erotic novelpartially set in Victorian Boston, I was personally curious to see how well my own characters and scenarios would hold up in the light of Ms. Rosenman's theories. (Pretty well, it turns out.) As a resource for authors who would like to paint a richer, more nuanced picture of Victorian sexuality, I would recommend this book, which packs a world of fascinating detail in its two hundred pages.
Posted by Lisabet Sarai at 3:00 AM