I admit it. I've got a thing for nerds. When “The Man from UNCLE” was popular, I had the hots for skinny, intense Ilya Kuryakin, not the dashing alpha guy Napoleon Solo. I was hopelessly in love with Mr. Spock. (After all, think about making love while in the throes of a Vulcan mind-meld.) Near the top of my sexy, romantic movie list is "Earth Girls are Easy", featuring gangly, geeky Jeff Goldblum as a
brilliant alien. A more recent example of a sexy nerd is Clive Owen's short, unshaven, and amazingly ingenious character in the bank robbery thriller "Inside Man".

It's fairly easy to understand why I feel this way. Growing up, I was the egghead, the bookworm, the too-smart girl whom everyone made fun of. The only guys who could deal with me were the ones who were at least as smart as I was. They weren't on the football squad; they weren't voted Best Looking or Most Popular. But they had that something that could start my motors. It was intoxicating, yes, arousing, to have a conversation with some of these guys, especially when I got out of high school and into college. We understood each other, and I began to discover that despite their definite nerdish qualities, they were enthusiastic and innovative when it came to sex.

Actually, research has shown that in defiance of their public image as socially challenged losers, nerds are more successful than the general population in finding mates, staying with them, and producing
children. Of course, that is not necessarily going to endear them to readers who are seeking the ultimate sexual fantasy, but it's something to consider!

Anyway, some of my heroes – actually, my favorites – definitely don't fit the classic hero mold. The character of Rick Martell in Nasty Business is perhaps the most anti-heroic protagonist I've ever created. Physically, he's short, wiry, a bit rumpled, with a droopy, disreputable-looking mustache. He's manipulative, sneaky, dishonest, arrogant, and more than a little sexist. At the same time, he's a brilliant engineer and a wily strategist who matches every one of Ruby's maneuvers as they compete for a critical business deal. 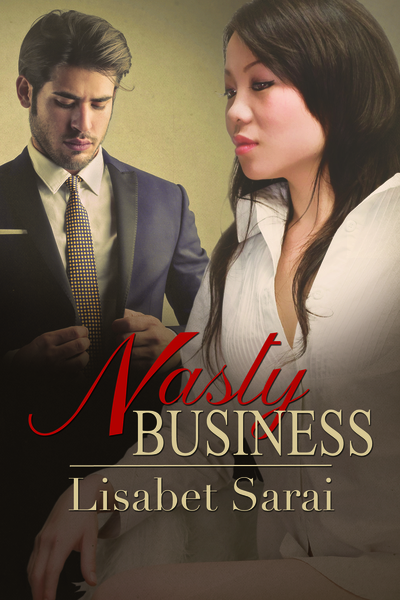 You almost hate Rick, when you see the way he takes advantage of the women around him. And yet, like Ruby, Margaret and Luna, I can't help finding him peculiarly attractive. He's simultaneously insightful, able to discern and use the desires of others for his own purposes, and blind when it comes to understanding his own emotions. He's brash and egotistical, not recognizing his own vulnerability, underestimating his opponents. Ultimately, though, he learns a lesson or two under Ruby's lash.

Want to meet him? Here's a quick snippet, after Rick's first attempt to get the upper hand in his dealings with Ruby.

I remember to grin and give poor Margaret a wink as I exit from Ruby’s office, but to be honest, I’m a bit shaken. I’m both amazed and annoyed. Annoyed that Ruby rejected my carefully prepared pitch. Amazed that she was able to. That she could be so icily professional, so scrupulously correct, after last night’s scene in the taxi. Clearly I underestimated her.

Women find it hard to resist me. It’s just a fact, something that’s been true since I was in my teens and my old amah ambushed me in the garden and gave me my first lessons in the fleshly arts. By now, I almost take it for granted.

I’m sure that it’s something primitive, biological. I know that I can’t take the credit. I’m smart, but no genius; rich, but no Bill Gates. As for my looks – well, let’s just say that at best I look innocuous, at worst, disreputable.

Yet I can walk into a crowded room, and every woman there will sense my presence. It’s mutual, too. I can hear the intake of their breath, feel the heat of the blood rising in them. Catch hints of their delicate musk as I sniff the air like the predator I am.

I should mention that I have an unusually acute sense of smell. Maybe that’s the source of it all, some trick of the wiring in my lower brain that gives me this delicious advantage.

Some people might think it’s unethical, that I should try and use this quirk of my personal chemistry to enrich myself. But each of us plays the hand we’re dealt. Why should I handicap myself by renouncing my greatest gift?

Ruby wants me. I know she does. Which makes her chilly reception during our interview all the more incredible. I’ve never met a woman with such self-control.

Now that our interview is over, the nervous tension that I kept at bay in her presence washes through my body. I literally am shaking. Margaret eyes me curiously.

“Are you unwell, Mr. Martell?” she asks. I get the feeling that a part of her wishes that I would expire immediately.

“Not at all, Margaret,” I reply. “Never been better. Ms. Chen and I had a most stimulating meeting.”

“I’m glad to hear it,” she says frostily, and returns her gaze to the document she’s editing. She pretends to ignore me. I can feel her heat, I can smell her arousal, even from across the room.

I watch her for a few moments, admiring the graceful curve of her neck, the creamy skin of her bare forearms. I smile, recalling the way her nipples rose so smartly at my slightest touch. Margaret, at least, is not immune to my charms. But I decide to spare her any further attentions, for now.

She does not reply. Her lips are pressed together in grim determination, but her flushed cheek tell the true story.

Yes, Rick isn't exactly the most admirable guy on the planet. But I'll tell you a secret: I love him. If I met him in the flesh, I'd never be able to resist his anti-heroic charms.