My snog this Sunday is a blast from the past. The sexy excerpt below comes from my scifi ménage romance Bodies of Light, which won a Whipped Cream Best Book award back in 2011.

To celebrate my joining the Twittersphere (please follow me @lisabetsarai!), I’m giving away a copy of the book to one person who leaves a comment. Don’t forget to include your email!

And when you’re done here at my blog, be sure to visit Blisse Kiss Central, for more lovely lip-locks.

Physicist Dr. Christine Monroe has devoted her lonely life to research on hyper-space travel. Her continued failure leads her to sign on to the Archimedes, a sub-light-speed mission aimed at establishing a colony in the Sirius B system.

However, Alyn and Zed are solid, real, and ready to sacrifice their lives for the strong woman they’ve found stranded in deep space. As her ship begins to disintegrate, Christine must choose between the planet she was sent to save and the two alien beings she’s come to cherish. 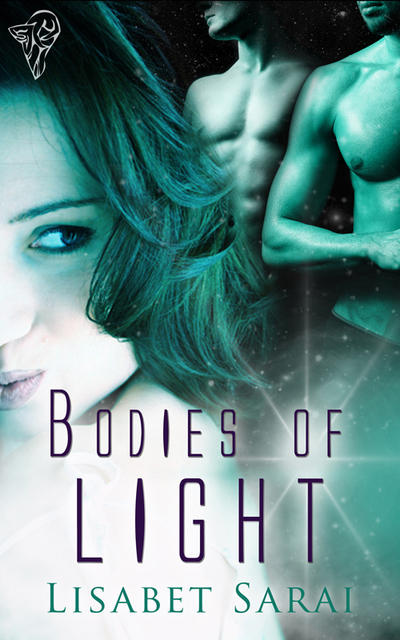 As soon as levels reached something near normal, before the inner door activated, Christine tore off her helmet. “What’s going on?” she demanded. “You were out in space without suits, without helmets! How is that possible?”

The airlock spiralled open. Christine stumbled out, almost collapsing on to the bench that paralleled the wall. She didn’t resist as Alyn and Zed stripped off her pressure suit and stored it away. She just sat there, shaking her head, not believing her eyes.

“I thought I dreamed you,” she whispered. “Am I still dreaming? Am I dead?”

Alyn crouched at her feet and grinned up at her. “You definitely look alive to me.”

Zed seated himself beside her, his arm around her shoulders. He nuzzled at her neck, sending tiny shivers down her spine. “You’re certainly still warm…” He rested his palm over her pubis and brushed a finger through her cleft. “Wet, too…”

Languid desire threatened to overwhelm her once again. Christine pushed it away. Springing to her feet, she backed towards the opposite wall. “No! Don’t try to distract me! I need answers!”

“What you need is love,” murmured Alyn. He took a step in her direction, but Zed’s hand on his shoulder made him pause.

“I understand,” said the darker man, sounding serious for once. “You’re a woman of great intelligence. A scientist. You are bothered by the unexplained.”

“Damn right I am,” she replied. “So—explain yourselves!”

“What do you think?” Alyn’s voice was gentle. “Do you have any theories?”

Christine looked from one to the other. Each was perfect in his unique way. Alyn’s grace, Zed’s power—they were practically unearthly. How had they made their way to the ship, without a vehicle of their own? How had they survived outside, without suits or helmets?

They might be figments of her imagination, but their bodies felt as solid as her own. She could smell them, a paradoxical mix of spring flowers and autumn leaves. She knew if she ran her hand over Zed’s swelling muscles she’d feel the warmth of skin under his thin garment. She guessed that if she gave in to her desire and pressed her lips to Alyn’s ripe mouth she’d taste some intricate bouquet of flavours, far too complex to be imaginary.

Perhaps the whole ship was an illusion, along with all her memories and sensations. She knew that electro-stimulation research was making rapid progress back on Earth. But she didn’t think it had reached this level, where selective electrical impulses piped into the brain could create a complete, consistent, tangible world.

Or aliens? Could Alyn and Zed be creatures from another world?

“That’s right,” said Zed, nodding as though she’d spoken aloud. “We knew you’d work it out.”

“But—but you look so human!”

Alyn came to her side and led her back to the bench. She sank down, too astounded to resist. Seating himself beside her, he stroked her hair with gentle fingers, then turned her face to his. She could feel his breath on her cheeks.

“We deliberately adopted these forms to make you feel more comfortable, sweet.” His lips captured hers. Christine moaned into his mouth, then feebly pushed him away.

“What do you really look like?” She searched their eyes. “Tentacles and bug-eyes?”

Zed took her other hand and brought it to his mouth. He kissed the palm, then ran his hot, wet tongue between her fingers. She squirmed, feeling as though he was licking the cleft of her sex instead. “Something like that,” he answered finally. “You shouldn’t worry about it, though.” Still holding her hand, he curled her fingers around the stiff rod of flesh jutting up between his thighs. Somehow his flimsy clothing had evaporated. His cock was a super-heated bar of steel. “We won’t hurt you, Christine, I promise.”

Christine remembered her ‘dream’, the glory of being stretched by two hard cocks simultaneously. She wondered why she was not embarrassed. When she squeezed Zed’s erection, he swelled further. Her pussy clenched in anticipation and moisture began to coat her thighs.

Alyn bent to suck her nipple through her T-shirt. The rigid knot felt as though it was about to explode.

“Touch him too,” Zed instructed and Christine complied. Alyn’s cock was longer and thinner than Zed’s but at least as hard—and equally naked.

“What’s going on?” she murmured, as Zed claimed her mouth and Alyn slipped his eager fingers into her trousers. Her mind recoiled at the notion of having sex with non-humans. Her body, however, had no such qualms.

“We’re making love to you,” said Alyn, easing off her clothing.

“We’re fucking you,” added Zed, biting her nipple until she screamed. “That’s the most important reason that we’ve taken these human forms. So we can make you come.”

Love the snippet! Now, I want to read more!

Love the snippet! Now, I want to read more!

I want. That was so hot. Yummy

wowzers :) sounds fantastic! Thanks for sharing!

wowzers :) sounds fantastic! Thanks for sharing!

Pretty hot!! Thanks so much.
debby236 at gmail dot com

I've always had a weakness for hot alien guys!

I knew I'd read this before, this was in Seeing Stars Anthology! Loved that book!

Thanks for dropping by and reading my excerpt. I've drawn a winner - congratulations to Harper!

I think I'll do this again this weekend. It was so much fun...