* What We’re Rollin’ Around in Lesfic with: Let’s Talk About Sex in Our Books

As you’ve probably guessed, none of these statements can be easily reduced to true or false. That’s why I wanted to talk about sex scenes in lesbian fiction with other authors and with readers. So I proposed a session at this year’s Golden Crown Literary Society Conference called “Fade to Black or Go There.” 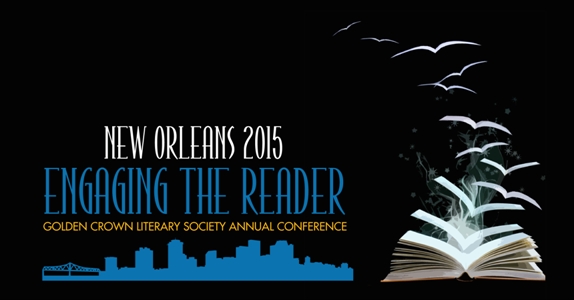 I wasn’t very surprised when over 20 conference attendees applied to be panelists. Clearly, sex is, well, a hot topic. In order to give as many people the opportunity to participate, we ended up splitting the session in two, focusing in the first part on an author’s decision about whether to include sex in a book or simply fade to black. In the second part, we focused on the sex itself and how authors think about the kind of sex they include in lesbian fiction.

Part I: No Sex, We’re Lesbians?

Five wonderful and thoughtful authors (Jeanine Hoffman, Linda North, Erin O'Reilly, Rebecca Swartz, and Sandra Moran) whose work spans many genres responded to two sets of questions I posed. First, I asked them to talk about how they decide about whether to include explicit sex or write a scene that fades to black. Does genre influence these choices? Then I asked them how much reader expectations influenced them.

Here’s some of what they said:

I began by reading a short piece from my second book, Love Is Enough, that takes place just before the two main characters—who met on a sailing date—are about to have sex for the first time. Here it is:

“Angie,” Jan continued, trying to find the right words to explain what she wanted, what she needed. “I want to…I like to be…to be the one who, uh, holds the tiller, you know.”

She moved her hands down Angie’s back and rested them in the curve above her ass and hoped that Angie hadn’t forgotten the parts of a sailboat.

Angie pulled back a little and looked into Jan’s eyes with that cute little pursed-lip smile and tilted head. “Works for me, skipper,” she said. And then into Jan’s ear whispered, “First mate reporting for duty. Do I get a turn on the tiller at some point?”

Jan nodded and breathed out “yeah”

And here’s the same scene without the coded language:

She moved her hands down Angie’s back and rested them in the curve above her ass.

Angie pulled back a little and looked into Jan’s eyes with that cute little pursed-lip smile and tilted head. “Works for me,” she said. And then into Jan’s ear whispered, “Are you a stone butch? That is, can I touch you?”

Jan nodded and breathed out “I’m not stone, so yeah.”

While it’s true that the sailing metaphor worked for the characters and the story, there were other considerations as to why I thought I’d be better off with the first version. It was less direct and because of that, it might work better with lesfic romance readers. Was I unnecessarily cautious? One reason why I proposed this panel for the GCLS Con was to help me answer that question.

But then again, romance is romance. Readers are looking for their happily ever after, which means that the main character who starts out as a player, sleeping her way through a community, will reform her wanton ways when she meets that special someone.

What does that say about women and sex? Are we slut-shaming our characters? Or are we just structuring the story to fit what readers expect from a romance?

It was clear from this discussion that there’s no right or wrong way to describe sex between two people. The panelists gave specific examples of characters who needed sweet mutuality (including those with abuse histories, those recovering from the death of a partner, and those living with an illness) and those who needed to claim a kind of raw sexuality in order to feel alive.

I came away from both panels acknowledging that while the questions I have about writing sex scenes in lesfic cannot be fully answered, it’s the discussion that really matters. Like sex in general, it’s important to be candid and clear about needs and expectations so that everyone can then relax and have a good time. And I have to say, we did.

My thanks to the nine panelists and to everyone who attended both discussions. Not all of us want or need the same things from our books, which is one reason why it’s so good that we have access to such a wide variety of stories across genres. The same thing can be said about the sex in our books. Some of us prefer less of it, some of us more. Some want tender sweetness while others need the intensity that comes with edgier, rougher activities. Fortunately, none of it is in short supply.

Cindy Rizzo has published two lesbian romance novels: Exception to the Rule, which won the 2014 award for Best Debut Author from Golden Crown Literary Society and was a finalist for the Rainbow Book Awards, and Love Is Enough. Ylva Publishing will release her third book, Getting Back, in October 2015. Cindy’s short fiction, The Miracle of the Lights, and V-Day 1978, was also published by Ylva.

Cindy lives in New York City with her wife, Jennifer. You can contact Cindy by email at cindyt.rizzo [at] gmail [dot] com, via Facebook www.facebook.com/ctrizzo, through her blog, www.cindyrizzo.wordpress.com, or on Twitter @cindyrizzo.

* The above title is an homage to the groundbreaking essay “What We’re Rollin Around in Bed With: Sexual Silences in Feminism-A Conversation Toward Ending Them” by Amber Hollibaugh and Cherie Moraga (1981), one of the most influential discussions of lesbian sexual politics. The essay can be found at http://www.freedomarchives.org/Documents/Finder/DOC46_scans/46.WhatwereRollinAroundinBedWith.pdf.

Thanks so much for a great post! You've touched on some of my personal worries. I tend to write on the hotter and more explicit end of the scale (though it does depend on the stories and characters), and I'm sometimes concerned that my work is too raw for the typical lesbian reader. (Actually I worry about that with regard to my het stories as well, especially when the market is romance.)

Ultimately, though, I have to let my stories tell themselves in the way that feels natural. If I alienate some readers, there's nothing much I can do about it.

Great discussion. Thanks for posting it. Lisabet, I'm off to Amazon to check out your books.

Cindy - you rocked as a moderator on those panels. Thank you again!

This was a thoughtful and well-organized panel - great discussions.