I have a secret. One I don’t tell many people, but I’m going to share it here. I suffer from something called fibromyalgia. It’s a long word to say I have trouble sleeping, my muscles hurt all the time, and sometimes I want to cut my feet off to make the burning stop. There are days when picking up my eleven-pound cat is a chore, and other days where my hands don’t work very well. The day I realized something was wrong with me is one I’ll never forget. I couldn’t hold a glass long enough to take a drink, and I broke down crying in the middle of the kitchen.

There’s a lot of me in A’yen, the main character of My Name Is A’yen. Including my experiences as a fibro sufferer. A’yen is a humanoid alien covered with tattoos, called markings, that he did not choose to have. All males of his species have them. They’re divided into three sets.

First set is applied at eighteen and covers his arms and across the shoulder blades on his back, then goes down his sides to his waist. Second set goes down the outer length of each leg onto the tops of his feet, at the age of twenty-two. Third set is the worst, covering the rest of his back, and is done at thirty-two. In this book A’yen doesn’t yet have third set and he’s dreading it. He’s thirty-one in the novel.

Why does he dread it? Because they hurt. All. The. Time. They interfere with his sleep, clothes he can wear, where people can touch him, and make it easy for people to take advantage of him. There are times when he goes around in a fog from lack of sleep, and just wants to be left alone because nobody can touch him if he’s alone. I live half my life in a lack of sleep fog. I never feel like I’ve gotten enough, no matter how much I get. Because it’s not the deep, restful sleep every human body needs to repair itself. The constant pain keeps me from achieving that state on a regular basis.

The ink used for the markings is metallic, and his species processes electromagnetic energy very different from us humans. The ink is the source of the pain as his body fights it every second from the moment it’s introduced into his body until the moment he dies. A lot of males go mad and kill themselves so they won’t have to deal with it anymore.

I didn’t consciously make A’yen mimic my own struggles, but once I realized what was going on I went all in. For the first time I could take this thing I live with and use it to deepen a character. That’s what writers do. We pull from our own experiences to make the ones on the page feel real. I had a couple of bad stretches on the fibro front while I was writing this, and they made it into the novel.

Fibro is an invisible disease, and many doctors don’t believe it’s real. Those who don’t have it, and who have never had the crap beat out of them, don’t believe how much it can hurt just to be touched. As I’m writing this I’m in one of the “I want to cut my foot off to make the burning stop” phases. It’s always worse when the humidity is high.

The same is true for A’yen. Most humans in the story world don’t believe the markings cause pain, and they don’t believe he’s in pain every second of every day. Those of us who suffer with chronic pain, no matter the form, experience this every day. It’s why we tend to keep it to ourselves. People around us don’t understand it, and what’s worse is many don’t want to. They tend to think it’s all in our heads. It’s not.

Next time you’re around someone with chronic pain issues, be gentle if you have to touch them. Watch for the little things and do what you can to help. Because some days, getting out of bed is unbelievably hard.

The novel may be fiction, but A’yen’s pain struggles are very real. And they don’t end. A romance happily ever after happens in spite of the couple’s circumstances. That’s what makes romance unique. But I haven’t left him completely without hope. There are a couple of things he can do to ease the pain, and he indulges in them whenever possible. You’ll have to read the book to find out what they are. 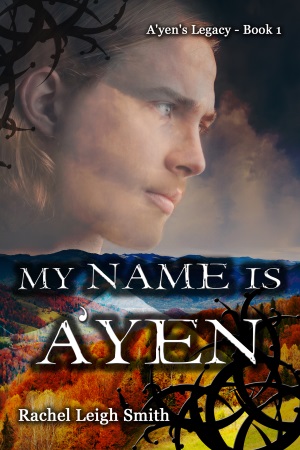 My Name Is A’yen
A’yen’s Legacy #1
They've taken everything from him. Except his name.

The Loks Mé have been slaves for so long, freedom is a distant myth A'yen Mesu no longer believes. A year in holding, because of his master's murder, has sucked the life from him. Archaeologist Farran Hart buys him to protect her on an expedition to the Rim, the last unexplored quadrant.

Farran believes the Loks Mé once lived on the Rim and is determined to prove it. And win A'yen's trust. But she's a breeder's daughter and can't be trusted.

Hidden rooms, information caches and messages from a long-dead king change A'yen's mind about her importance. When she's threatened he offers himself in exchange, and lands on the Breeder's Association's radar. The truth must be told. Even if it costs him his heart.

Excerpt from My Name Is A’yen:

Creeping through an asteroid field had never been high on A’yen’s list of favorite things to do. After five days, the end was finally in sight. Another twenty-four hours and they’d be free and clear. Then another forty-eight and Rim One waited for them.

But right now, running on seven hours of sleep spread over the last three days, all A’yen wanted was a night relatively free of pain so he’d stop feeling like a zombie. No wonder the men stuck in regiments or labor details went mad. Lack of sleep made it all so much worse. By now he should be used to it. But he wasn’t.

Stretched on his bed, arms spread, no clothes, and the air vents set to blow across him, sleep insisted on hovering without landing. He’d never been this tired before, never had to push through it on his own without relief. Right now he’d almost damn his soul and let anyone who wanted him have a go in the hopes it might set one off.

Or ask Dr. Hart to rub the oil in again.

The door chimed. He didn’t move. Another chime. “Come in.”

It swooshed open and heavy footsteps entered his room. Not Pete or Cap. Neither would have waited for him to invite them in. He cracked one eye open to find Hale Curran staring at him. “What do you want?”

A’yen closed his eye. “Then talk.”

Hale’s foot kicked the bed. “Get up.”

Quick as a lightning flash, A’yen grabbed Hale’s ankle and yanked him to the floor, then sat up and pulled a blanket over his legs. “Don’t you ever do that again. I am not one of your regiment slaves to order about at your leisure.” 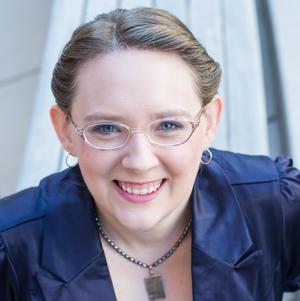 Bio: Rachel Leigh Smith writes romance for the hero lover. She lives in central Louisiana with her family and a half-crazed calico. When not writing, which isn’t often, she’s hanging with her family, doing counted cross-stitch, or yakking about life, the universe, and everything with her besties. There may also be Netflix binging . . .

For a chance at an ebook of My Name Is A’yen, answer this question: Who is your favorite romance hero? Don't forget to include your email address in your comment!

Thank you for being my guest, for sharing so much of yourself, and for your generous giveaway.

I wish you happy endings that will distract you from your pain.

The book sounds fascinating and unique. I hope someday they find a cure for fibro.
Best of luck
debby236 at gmail dot com

Romance Hero: I'd have to say it is my husband. Despite his numerous flaws, he gives me all his love. Rubs my back, if I feel even the slightest bit bad - he babys me. Don't want to cook, he grabs something on the way home from work. 18 years and still going strong. :)
madamc421 at yahoo dot com

He's definitely a hero! You're entered in the drawing.

Thank you so much for having me today, Lisabet.

Fibro is one of those invisible diseases that far too many people believe is all in our heads.

There are so many fictional heros from Atticus Finch and Ransom Stoddard to Hiro Hamada, it's hard to choose one. But my real life hero is my youngest daughter. Like you, she has constant pain but hers is just in her lower abdominal regions. We know about the acute endometriosis but are afraid it's more than that. Since age 12, she lives daily with a minimum of 8 on the pain scale. That's just normal to her. It gets bad when she can't get out of bed or can't stand or falls on the floor doubled up. Yet she still pushes on and trys to live a normal life. As you know, it's not easy. I pray someday she'll be able to function pain free. Those who live in constant invisible pain and try to live as normally as possible are the real heros.

She is absolutely a hero. I suffer with endemetriosis too, though it's not that bad. If a doctor ever tells me everything needs to come out, my response will be how soon can we do it.

I remember vividly when I was a teenager, having days when I couldn't stand up straight and would curl up on the floor or my bed and sob. I'd have to go home from work and had days where I couldn't get more than 10 feet from the bathroom.

Hugs to you and her, and thanks for your comment.

The drawing is now closed and the winner has been emailed.