Storm in the Brain

Every author has a strategy to create a story, based on an initial idea. I am lucky to have a muse who likes to play with my ideas, back and forth. She shares her comments, her thoughts and her proposals how to form a story and we have a lot of fun in all these hours of brainstorming. My muse also adds her two cents to the characters I invent and comes up with some of her own. Often she has a clearer vision of the character’s attributes than I have. She also hears me out when a scene is finished and then tells me about story flow and if there are breaks in logic. Once she took apart my whole opening scene to come up with a much better one. I take my hat off to her imagination and creative mind. Don't forget—she’s been my best friend and companion for about forty years.

Our common work—if you want to call such a fascinating hobby work—started in the year 2000. We were fans of Tolkien’s books and loved Peter Jackson’s movies. Naturally, we wrote fan fiction. The afternoon hours with coffee and cookies soon became a regular weekly event. We sat for hours, polishing scenes and thinking about one nasty twist after another.

Our latest novels are the results of last summer’s hours in her garden or mine. I told her about Sidarra, the young man who wants to be much more than a simple worker, in order to impress a woman from the city. He doesn’t know that the project he joins will take him to another continent and confront him with completely alien situations. Project: Recruitment took shape in about three weeks and took two months more to write. We both loved the main characters Sidarra and Oleyni so much that I decided to write a sequel that takes the couple to the moon of Habrano. They don’t anticipate being drawn into a cruel game, in which Sidarra has to take a lot of risks to save his beloved. So Emotion Riders takes a very different approach to the couple's relationship. While the first book focuses on the development of their connection, against the odds, the second book makes clear they will stay together, even if evil opponents try to tear them apart. For the second book, my muse had many fascinating ideas concerning the obstacles Sidarra has to overcome.

Of course, playing ping pong with ideas sometimes leads from one obscure gag to the next and we end in hilarious laughter, from which no safe return is possible. I always take notes and save those brainstorms for later. You never know when a totally absurd idea might be the right one! And the next novel is already in the making.

Here is a short excerpt from Project: Recruitment, published by eXtasy books.

After being taken to the home of Oberat, Oleyni accompanies Sidarra to a room to get him some new clothes and help him take a shower… 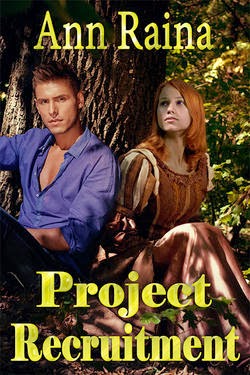 “I think a darker blue suits you well.” Oleyni pulled out a pullover and pants and a warm undershirt. “It might get a little too cold for you in the evening. Better wear something warm.”

“Oh, washing! Yes. Come.” She showed him the adjacent room. If Sidarra had expected faucets or anything recognizable, he was disappointed. “If you drop your clothes and stand here, the water will swirl around you. Shall I show you, or do you just want to try?”

“Fine.” Oleyni folded her hands in front of her lap and watched him, waiting.

“Do you mind? You fainted some minutes ago, and the warm water might affect your circulation again. It could be that you need help, right?” Her eyes were wide open, portraying innocent ideas.

Sidarra smiled helplessly. “You mean, you are here to lend a hand?”

“There might be spots you can’t reach, don’t you think?”

His smile blossomed to a laugh that they shared. “You are right.” He shed his shoes, pants and jacket, revealing the net around his torso. “I might need help. This is all too strange for my taste.”

“You will get used to it.” Oleyni shrugged. “I guess I would feel the same if I was in your place. Your village seems to be strange, as well. You live in huts, I heard.”

He frowned as he approached the area where he assumed the water would flow. “What do you know about Ethisan?”

“That is your village? Well, I know that the continent is less fertile than ours. You drill wells for water and most parts of the continent are hard on the people. The majority consists of farmers and herders, some teachers, too. Temperatures are of modest warmth. It does not get cold, so you don’t know snow. There is just one developing city, with companies prospering from selling machines and ground transportation vehicles as well as many different tools. Trade markets have just recently begun to stretch to foreign countries in the north. Did I forget something?”

Water poured over Sidarra’s head and shoulders. It was warm and very pleasant, washing away sweat and dust. He closed his eyes and let Oleyni’s voice become the background of the pouring water. Warm hands massaged his shoulders, gently groped through the net on his back and went on with his buttocks. He pressed both hands against the wall and enjoyed the attention, moaning. When Oleyni was done down to his feet, she used soap to wash his hair, standing on tiptoe to reach his forehead.

Sidarra was so content he woke from a dream when she slapped his butt. “I guess if you get any cleaner, you’ll be translucent.”

He turned and the water stopped. Wiping his eyes, he made a step to where she waited with a big and very soft towel. “Thank you. That was very kind of you.”

“Your muscles felt like thick roots. Is it better now?”

“Much better.” He dried his hair and body. “How did you know?”

She pursed her lips and the sparkle in her eyes revealed her mischief. Hands folded behind her body, she turned her shoulders from left to right. “Female intuition.” 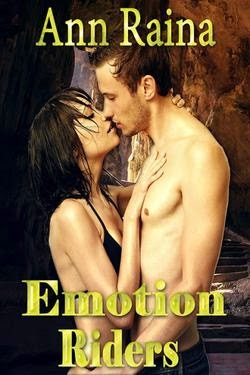 Sidarra is on his way to find a key to save Oleyni from a prison cage. He meets a strange fellow:

Sidarra swiveled around and a stone crashed where he had lain.

A six-handed, flat creature with an astonishing human face stood close by, clad in a hard, light-brown shell and a smaller one on its head. From both sides antennae stood up as if sniffing the air. Stones lay at its feet which it was throwing with impressive speed. Sidarra skipped to the right, raising his hands in defense.

“Stop! I didn’t know it was your water!”

The next stone missed him by a hair’s width.

“You dried my well, you stupid moron!” The creature took four more stones in his flexible hands and then, frowning, lowered them. “Ah, it’s you.” He dropped the stones and waddled over to reach out a six-fingered hand to Sidarra. There were sharp spikes at the ends so Sidarra refrained from a handshake. “You come for the key, don’t you?”

Sidarra lacked an answer, too puzzled by the sudden change. He gave a brief nod and the creature crinkled its little round nose. The spikes scratched lines in the stones.

Sidarra got back up and very carefully followed the flat field inhabitant on the stones where it walked, marveling at the pointed derrière. Behind the heap of stones was an entrance, but it was by far too small for the human to enter.

“Oh, big guy, hmm? Wait.” The creature, not taller than the leg of named human, vanished and rumbled through a mass of things. There was clacking and rolling and even a small thunder clap that sent up a cloud of dust. Finally, the creature surfaced and handed the still flabbergasted water thief the same key he had gotten the day before. “Here. That’s what you want, so why do you look as if you got hit by a stone?”

“I almost got hit by a stone,” Sidarra bristled.

The creature waved away the argument with four of its six hands. “Ah, almost is not hit. If I always hit, I would not need to search for food.”

“Thank you.” Sidarra kept the key in his hand. “Any idea how I get back across the canyon? The bridge collapsed.”

“Stop!” Sidarra blocked its way. “Tell me, how do I get back across the canyon, through the woods to a meadow in the south?”

The creature stood and looked at the human as if he was a brick short of a load. “You turn around my home and take the flight down and up on the other side. Is that too complicated for you? Can’t you use stairs with your only two legs?”

“Down and up. Or up and down. Depends on the matter of your coming and going.”

“There were no stairs before.”

The creature pulled a face. “Your argument is a stupid one. You have not the time to stand here and chatter like a delirious bug.”

“Thought you’d never ask.” Four arms showed him the way to leave the stony field. “Have a safe trip. I was told there are holes in the ground. Don’t break a leg. You only got two!”

Leave me a comment (with your email) telling me your impression of Sidarra and Oleyni from my Project: Recruitment excerpt. I'll randomly choose two people who will receive copies of Emotion Riders.

About me
Writing has been a hobby I started early and have not stopped since I was young, a time that has passed for some years. Oh, well, being beyond forty has advantages and then not. Besides writing, I love to ride, recently bought a horse, and have five cats at home. I also love to work in my garden. That’s the summer place where I re-read older manuscripts to find flaws and what more. My friends say that I’m a happy camper and I agree. Happiness can be lived if your expectations are not sky high. Carpe diem!

Welcome to Beyond Romance. I must say, your Muse sounds like quite a character and your books, very original!

Good luck with your publishing, and thanks for being my guest.

Made me smile. I would love to read more. I loved reading the info on your muse.
debby236 at gmail dot com

I'd say your muse is alive and well.

I LOVE your muse's sense of humor, It's a lot like Yoda from Star Wars. I've gotta get the book too.

Sidarra reminds me of JonTom Merriweather in The Spell Singer series, someone taken from his own world & forced to learn abouta whole new world (with a lot of laughs involved). I like that Oleyni has no problems flirting with Sidarra & doesn't make him feel left out because he isn't from her world.

Crazy humor! Sounds like my life sometimes. Love it.

they are interesting characters, was a little hard to tell exactly what their relationship was from the little I read, but seemed like two strangers from different types of lives but who might end up in a relationship in the end, would be interesting to find out what happens with them. Your having a muse was also an interesting thing guess we can all use constructive feedback on things Happy writing and thanks for the give away starryann2000 at yahoo.com

Good morning to everyone,
as promised, two copies were just sent to the winners - Mindy and Debby.
Have a great weekend,
Ann Raina