Ebola - What Does that Have to Do with Snogs?

Assuming that you're not living on a desert island, you're probably aware of the Ebola epidemic raging in Africa. The scary thing about this disease is that it is fatal about 90% of the time. This makes it more dangerous than bubonic plague, the Black Death that ravaged Europe during the Middle Ages.

You can find out more at the World Health Organization website.

As of August 1st, more than 700 people in Liberia, Sierre Leone, Guinea and Mali have died from the disease in this latest outbreak. I suspect that the number has risen since I found that statistic.

If you're like me, you feel powerless. You want to do something to help. Sure, Africa seems far away, but in today's highly connected world, it wouldn't be hard for the disease to find its way to Europe or America.

Well, there is something you can do. Buy a copy of Coming Together: In Vein, the altruistic anthology of vampire erotica I edited back in 2012. All proceeds from this book benefit Doctors Without Borders (Médecins Sans Frontières), which is on the front lines fighting the epidemic. MSF is hard at work providing emergency health services in other disaster and conflict zones as well, including Iraq, Syria, Gaza, the Central African Republic and Myanmar.

Turn your love of sexy fiction into something productive ;^) by purchasing the book, which is available in both ebook and print form from a variety of outlets. To whet your appetite, I'm offering a snog from my contribution to the collection, Vampires, Limited.

Of course you'll find lots of other snogs over at Blisse Kiss Central. Hop on over there after reading my excerpt. But first, leave a comment. I'll donate 50 cents to MSF for each comment on this post, up to a total of $50.

Can we reach 100 comments? That would make a big difference! 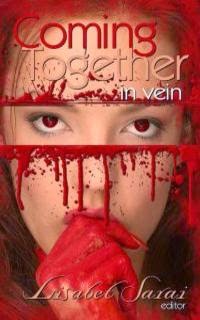 “Tell me about Barbara,” she asked finally. “The woman in the photos.” As soon as she saw his ravaged face, she was sorry for the question.

“I was stupid, inexperienced. And we were so much in love. When I realized what I had become, I crawled to her on my hands and knees and begged her forgiveness. I was so terribly sorry to have ruined our plans for a life together. Barbara, though, had other ideas. She pointed out that, according to all information, we could now share eternity. All I had to do was turn her, make her into a vampire too.

“I was reluctant, but she convinced me. She was so beautiful, I couldn’t bear the notion that she would eventually age and die while I’d live forever.

“We planned the ritual carefully, almost as if it were our wedding ceremony...”

“Right.” Jim laughed bitterly. “I set up the camera to record it all. The initiation of my beloved into the realm of the undead. But it all went terribly wrong.” He choked back a sob. Lara felt a sympathetic lump in her throat.

“Everybody knows how you make a new vampire. First you drain the victim’s blood, bringing her close to death. Then you allow her to drink your blood. That’s what we planned. That’s what we did. It was incredible, terrifying and ecstatic.”

“But she died. I couldn’t save her. I couldn’t turn her. Since then I’ve learned the truth.”

“To create a new vampire, you must suck the victim’s blood while you’re physically connected. While you’re having sex.”

“No, it’s no joke. That’s why I ended up this way. That girl at the party—all she really wanted was my blood. But one thing led to another, and eventually we were fucking. I don’t think she really understood either.”

No wonder his little demonstration had produced such an intense effect. For him, blood lust and sexual desire were inextricably entwined. The instinctive drive to reproduce, to bring more souls over the boundary of death into the shadowy world that he inhabited, this was something he could not deny, and could only imperfectly control.

Lara knew she should be frightened. She should get out his seductive presence before she made a final, incorrigible mistake. The risk, the pure reality of it, only made her want him more.

He was watching her. She could feel his eyes on her lips, on her throat, on the rise and fall of her breasts as her breath quickened.

She glanced around the bar, filling up now that it was after five. Donnie’s was not known as a “blood” bar, but still, she noticed half a dozen men wearing capes and pale make up, plus two or three women in slinky black dresses and wigs. It was pathetic, the way they all craved a fleeting taste of inhuman power, a brush with immortality. And here she sat, thigh to thigh with the genuine article.

“I don’t fully understand it,” Jim said, obviously catching her thoughts once again. “Why would they want to be me? Power’s nice, but overall, I live a pretty lonely and miserable existence.”

“Maybe—maybe I can make you feel less lonely. For a little while.” Lara cradled his cheek for an instant, then pulled his mouth to hers. His lips were soft as any flesh, warm and muscular as they met and molded to her own lips. She tasted the wine he had been drinking, with background flavors of iron and salt. His tongue, too, felt human, jousting against hers, exploring, questioning.

Her rigid nipples pressed rudely through the stretchy fabric of her top, pleading for his attention. Of course he knew what she wanted. Without breaking the kiss, he cupped both breasts, tracing symmetrical circles around the tips. Her pussy clenched. Her thighs opened involuntarily. She rocked back and forth on the bench, rubbing her clit against the hard wood.

“Please,” she moaned against his open mouth, and then was silent, realizing that she did not have to say anything. He broke the kiss to throw a twenty pound note on the table, then pulled her to his chest.

“Imagine your apartment,” he said, close to her ear. “Think about your bedroom. And hold on tight.”

Posted by Lisabet Sarai at 9:00 AM

I love the "altruistic erotica" tag--what a wonderful gesture!

How generous of you. I know just what you mean about feeling helpless in the face of disaster. However I'm convinced that every little bit we do to help makes a BIG difference when you add all the little bits together.

Good luck with your goal of 100 comments. Loved the excerpt.

Read this whole story in "CT: IV." Book is well worth buying.

Got it Tweeted. Nice job, Lisabet!

Thanks for sharing Lisabet! Hope you get a lot of comments!

What a great idea. Thanks for the excerpt and I hope you reach your comment goal!

What a great idea, Lisabet. I loved your excerpt, and I hope you achieve your goal.

Love the excerpt! I hope you reach the goal of 100 comments.

A very interesting post. Thank you for sharing and I hope you meet the goal you set.

I hope I'm not too late! Great snog, Lisabet, and you're supporting such a great cause. You are a wonderful person.

Thanks for your comments. Eleven comments times 50 cents is six bucks. I'll round that up to ten dollars. I was hoping I'd do better, though.

Meanwhile, here's the latest information from MSF about their efforts against Ebola.