As noted in the title for this post, this is my one hundred and fourteenth Sunday Snog. I never knew I'd written so many kisses!

It's a point of pride to me not to repeat a kiss in any Sunday post. This sends me scrambling into my back list each Sunday, looking for snogs I haven't yet shared. 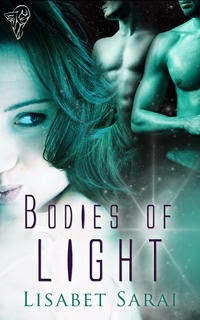 Physicist Dr Christine Monroe has devoted her lonely life to research on hyper-space travel. Her continued failure leads her to sign on to the Archimedes, a sub-light-speed mission aimed at establishing a colony in the Sirius B system.

However, Alyn and Zed are solid, real, and ready to sacrifice their lives for the strong woman they've found stranded in deep space. As her ship begins to disintegrate, Christine must choose between the planet she was sent to save and the two alien beings she's come to cherish.


You'll find the kiss below. After you savor this quick and delicious snippet, head back to Victoria's Sunday Snog page for links to lots more sexy snogs!

She slept without dreams, cradled in sweet oblivion. Awareness returned gradually: scents of new-mown grass and fresh-baked bread reminding her of Earth; a rich voice humming an unfamiliar melody; warm flesh pressed against her bare skin. As she became conscious of her body and surroundings, the warmth grew, dancing along her arms and legs, hovering at her breasts and belly, diving into the moist gap between her thighs.

Christine opened her eyes. She lay in her bunk, on her back. Zed curled against her left side, his body wedged between her and the wall. Alyn had somehow managed to find enough space to stretch out along her right. He had extracted the safety harness from its hatch on the bulkhead, pulled it over their bodies and fastened it to the edge of the bed. The elastic web, intended to keep the occupant from floating off the mattress, effectively sealed the three of them into the narrow bunk.

Zed crooned some alien lullaby, close to her ear. Alyn feathered caresses over her skin, sparking pleasure everywhere he touched. Christine’s eyes met his. She caught her breath at the emotion she saw there. He might be some extraterrestrial monster, but he cared about her—in a way no one else ever had.

When he saw that she was awake, he raised himself on his elbow, bringing his lips to within millimetres of her own, but not making contact. His gaze drilled into her, asking a wordless question.

Christine tangled her fingers in his silver locks and pulled his mouth to hers. Yes, she answered silently. Yes! I want you. I need you. I forgive you. She thrust her bold tongue beyond his perfect white teeth, taking all that he offered, drinking in his sweetness and his passion. All the while his hands roamed over her body, teasing her taut nipples, circling her navel, playing in the humid forest of her pussy hair.

She broke the kiss at last in order to face Zed and offer him her lips in turn. Fire burned in his bottomless eyes, raw and seductive, kindling a sympathetic blaze. As Zed probed her mouth, Alyn’s clever fingers found her clit, sending her soaring into bliss.

What an excerpt, Lisabet!

Thanks, Aurelia! It's a fun story with a hint of seriousness.

My motivation in writing it was to explore what sex would be like if one had no physical body...

I've had this book on my To Read list for a while. Time to start reading, I think. :) Lisabet Sarai + scifi = Great Read.