A Tour with Fur 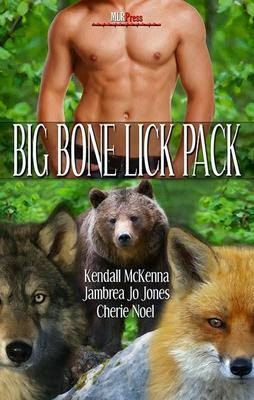 This experience has been a wonderful, if exhausting one. The blog tour for Big Bone Lick Pack is coming to a close. We’ve learned a lot while on tour. It helps to have three people along for the ride. If someone gets sick (Kendall and Cherie), make sure the calendar with all the tour and due dates can be accessed by all three. Don’t freak out at the last minute when you can’t remember when the next blog post is due (Jambrea), just check the calendar! Having three people on the team also kept the load of writing and submitting posts, off of one person. Along the way, we reaffirmed that the brain is a fabulous thing. Three writers of disparate personality, who managed to write interlocking stories for an anthology, turned around and collaborated on a long series of blog posts. As a team, we managed to draft a series original posts, without repeating a single one! Whew!

We hope that everyone who has followed the three of us on tour have enjoyed it as well. Our favorite parts of the tour were the character interviews. It was something fun that we came up with out of the blue when Kendall was sick and Cherie and Jambrea were struggling to find a topic. We hope you all enjoyed those as well.

This entire project taught each of us different lessons. All three of us learned that we’re capable of an easy and successful collaboration with each other. We learned how creatively fun it is to build a fantasy world that is set in a real world location, and mixing the best of both reality and fantasy. Jambrea and Cherie learned firsthand just how super organized Kendall is, and just how much of a lifesaver a calendar can be.

Welcome to the Big Bone Lick Pack: A more friendly and hospitable group of werewolves you’ll never meet! Visit with; 'Devil Dog and Bad Wolf', a 'Big Bad Bear' and enjoy some 'Shifty Fox Shenanigans'. Watch yourself, 'round the state park, 'cause we had a grizzly on the loose, just a bit ago. Our brave men and woman of the Boone County Sheriff's Department have everything under control. (Except maybe their own love lives!) But if you find yourself needing a doctor, head on down to Rabbit Hash clinic, or St. Elizabeth's Hospital is just up the road a piece. We hope you enjoy your stay.

At the sound of the barking dog, Seth sat straight up in his grave. He reached for his sidearm before he remembered where he was. He laughed at his own overreaction. Yeah, it could be a wolf, but it was probably just someone's pet dog.

The dog barked again, raising the hair on the back of Seth's neck. He scrambled out of his grave, unsheathing both his weapons. There was something about the barking that had Seth on alert. He quickly flicked the lantern on, but its dim circle of light was little help. He turned in a slow three-sixty, peering into the darkness, trying to assess possible threats among the shapes and shadows.

A growl carried from the far side of the river, loud enough the rushing water didn't drown it out. The dog was getting closer and it sounded like a damn big one. Seth flicked the safety off and tightened his grip on his sidearm. He'd need it if the dog turned out to be a wolf. Wolves avoided humans, though, so there wasn't much chance of that.

Seth snorted derisively. "There's no such thing as werewolves," he said under his breath. "You asshole, Chad. You can't be right about this."

The growl came from across the river again. It was deep and ferocious, full of menace and hostility. That was a damn big wolf.

"Just 'cause it's big, doesn't mean it spends half its time human." Hearing the words out loud reminded Seth how ridiculous the idea of werewolves was. Christ. Why had he let Chad talk him into this?

This time, the growl was almost a roar. Something large and heavy-bodied crashed through the trees, headed right for Seth. Okay - not a wolf. He raised the Smith and Wesson in the direction of the rampaging animal, adjusting his grip on the Ka-Bar.

A shadow moved quickly through the trees. It ran on four legs but was too tall at the shoulders, too wide in the chest to be a wolf. When it wove its way between two trees, Seth caught sight of its profile. His knees went weak and his heart slammed in his chest.

"Jesus Christ, a bear," he muttered through clenched teeth.

The bear reached the riverbank. It didn't even pause before plunging into the rushing water, splashing its way across. The bear didn't swim, it kept running. Seth realized the river was shallow in that spot. This thing was going to be on him in seconds.

The bear charged up the near riverbank and panic gripped Seth. He scrambled backward, his hand trembling as he tried to hold his sidearm steady. Despite the darkness, the bear was close enough now that Seth could see the giant, round head, and the thick ridge between its shoulders.

He'd rather face down a werewolf than a grizzly bear.

The bear ran straight toward Seth, its mouth open wide, frighteningly long teeth clearly visible. Seth fired several rounds at the grizzly, knowing it would have no effect on an animal that large. He was right; it didn't slow the rampaging bear at all.

Throwing the gun aside to free his hand, Seth fought the urge to turn and run. That would excite the predator even more. If the bear attacked him, Seth's only hope was to bury his Ka-Bar in one of its eyes, or its nose. If he lived through this, he was going to be totally fucked up.

When the enormous bear hit Seth, it felt like he'd been slammed into a brick wall. Seth hit the ground hard, all his breath knocked out of him, sharp pains shooting up his back. His head struck something hard and Seth saw stars.

The grizzly's hot breath blasted Seth's face. He stabbed the Ka-Bar into thick fur. He tried to reach the bear's eyes. He had no effect on the rampaging animal. Seth screamed when claws raked his arm. His side was on fire as claws sank into his stomach.

The last thing he saw was wickedly long teeth descending over his face.

Thank you again for joining us here! If you’ve lasted this long, now you can enter for a chance to win a stuffed, plush wolf and bear, that represent Jambrea’s characters, Dov and Kane, from her Big Bone Lick Pack story. 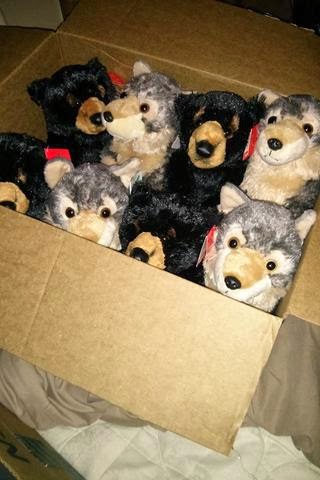 Sounds like an anthology I would enjoy... love the stuffed animals!!!

Thanks! Yeah, I do too, which is why I had to buy myself a set as well. lol

Just bought it last night at ARe. Going to read it later today. :D Just have to finish the book I'm in the middle of first.

I've followed this blog tour right through. You guys are so much fun. Thank you. Oh by the way I think I've said this on other blogs... But the book was First Class.

Thank you so much! I'm so happy you enjoyed the tour AND the book!!!

Hey there, Kendall, Jambrea and Cherie!

Welcome to Beyond Romance! Sorry I'm so late dropping by, but my time zone is totally out of sync with everyone else's.

I absolutely love the stuffed wolves. What a creative prize! I have to say, though, that the title of your anthology sounds incredibly smutty! (Is that deliberate ;^))

Thanks!!! lol The title came about because of an actual place. Big Bone Lick Park in KY. :) When you see a name like that... you HAVE to use it. lol :)

Best anthology of the year :)

I love this anthology, just finished reading it and I would love to have a sequel anthology (*hint, hint*). I would love to win one of the cute cuddlies, and I've had a great time along the tour (though I haven't been very good about commenting...maybe I can go back and add what I was thinking at the time to those posts...). Thanks so much Kendall, Jambrea, and Cherie.

I'm so happy you enjoyed the anthology! Thank you!