About 15 years ago I had an editor tell me my stories had lost their edge. They weren’t as emotional as I used to write. Here’s the thing – I left my abusive ex-husband and was living a happy life. That raw pain faded with each day. I found blessings in every corner. I was alive and I was free. I no longer had to walk on eggshells around a crazy man.

For years I took a break from writing for this magazine. I turned my attention to bigger works – novels. I wrote about happily ever after’s and finding that special someone. The problem I had was that editor’s words were still stuck in my head and thanks to my ex crushing my self-esteem, I couldn’t submit any of my manuscripts.

I turned my attention to non-fiction and wrote for magazines for years. Here I was welcomed with opened arms. Yet, my desire for fiction kept nagging me. My fingers itched to write a happily ever after or happy for now story. I longed for that true love and in my real life I was discovering it again. I’d found a man who treated me respectfully and loved me for me – faults and all.

My writing took off. I received my first book contract and within months I’d contracted five more books. I was on fire. Everything I submitted was being accepted; I couldn’t go wrong.

In 2010 I lost my son of only six days old. I got through my grief by writing, writing and writing some more. I belonged to the book a month club. Ideas were plentiful. It didn’t seem the high would ever end…and believe me I didn’t want it to.

Then some happened. I found a light at the end of the grief tunnel. My writing came to a screeching halt. The one thing I felt would never happen happened. My work started getting rejected. I lost that emotional edge again.

I did what I did best – crawled under a rock where I’ve been for at least a year now. Sure I’ve written. In fact I have four books done that need to be edited and submitted. There was no way I could submit and be rejected again.

A few days ago, thanks to a dear online friend I realized something – I AM A WRITER. No editor or publishing house can take that away from me. I have the desire to write and anxious to see my books published again.

Will the readers still be there? I’m not sure. It’ll feel like starting over, but I’ll find new readers. That’s the beauty of social media.

So what’s the point of this blog? Life will get in your away. It’s a fact. How you deal with it will determine where you go in this business. I’m positive of one thing - Once a writer, always a writer.

If you want to be published keep writing and submitting. You’re the only one who can stand in the way of your success.

Going for Broke by Amber Skyze

Deacon Burke has a singular goal—to win back the Las Vegas casino swindled from his father years ago.

Businesswoman Holly Perkins is equally determined to gain control of the Pleasure Palace, the decadent casino where anything goes—including exhibitionism and master/slave play. A corporate raider, she’s eager to put down roots in one location while running a business she loves.

When Deacon spots Holly in front of the casino it’s lust at first sight, and soon she’s submitting to him during a blistering-hot encounter. But how will he react when he learns of Holly’s agenda? All bets are off in their high-stakes game of carnal cravings and ultimate control.

Publisher’s Note: This title was previously released elsewhere under the title Hit Me, and has been revised and expanded for Ellora’s Cave.

Deacon rubbed his eyes. They burned from being sleep deprived and the bright lights didn’t help. It was nearing midnight, but who could tell in the city that never sleeps? He stopped to glance up at the majestic building. The four golden caps made it appear as if it were a true Palace. The design had been created with that in mind. Darius Burke had a dream. He’d wanted to build a casino that reminded people of royalty. He’d wanted them to feel like they were special when inside. For years he’d succeeded.

The one verse of the incessant Christmas song filled his mind as Deacon climbed the stairs to casino. Sure he changed it a bit to suit his needs, but that was his prerogative. 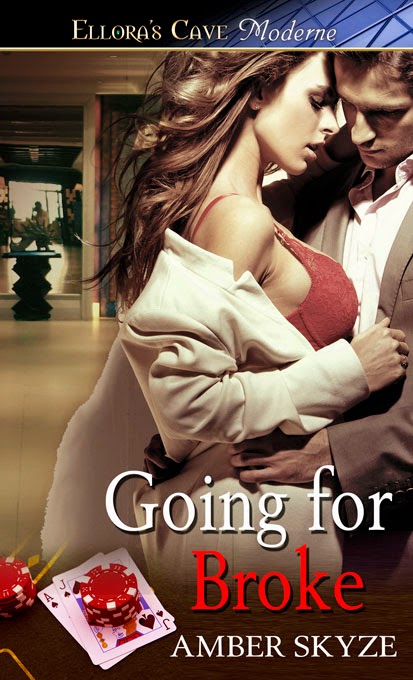 The flight in from Hong Kong seemed to drag on longer than it should have, but he closed the deal. They would gain a foothold in Hong Kong with their latest fragrance. The time had arrived for him to close another deal. The most important one.

Deacon adjusted the laptop bag dangling from his left shoulder. He lifted his right foot and placed it on the concrete stair. Gold speckles glittered the front staircases leading to the entranceway.

Each step he took was painful to his weary feet and heavy heart. He hadn’t stepped foot inside the casino or Vegas for that matter in nearly ten years. The day had finally arrived. He was coming home after many years away. Deacon Burke was one step away from reclaiming what rightfully belonged to his family – the Palace of Pleasure.

Though when his father owned the Palace the top floors known as the Pleasure part of the casino didn’t exist. Deacon could see his father rolling over his grave imagining the things that took place in the Pleasure area. Not that Deacon minded. Sex was an enjoyment of his. There was something about cherishing a woman’s body that brought out the animal instinct in him. He also didn’t mind doling out a spanking or two. Having a woman bent over, hands tied behind her back getting spanked, got him overheated every time.

He stifled a moan, while fighting the hard-on that grew in his black slacks.

Maybe he’d partake in a little fun before meeting with the current owner. Why not try out the merchandise? Not that it would change his mind on reclaiming the casino. It belonged to the Burke’s and Deacon would stake his claim, no matter what stupid stipulations they put on him.

Welcome to Beyond Romance, Amber!

When I was in my teens and twenties, I wrote tons of poetry, all fueled by my unfulfilled yearnings for this or that individual. When I became happily married, that font seemed to run dry. So I think I know what you're talking about.

I forgot to mention I'll give away a copy of Going for Broke to one lucky commentor!