Soundtrack for the Story

Yesterday, on Malin James' blog, I wrote about where the title from Roll comes from and I mentioned that I wrote originally ten chapters that had song titles as the chapter names.

Obviously, because of copyright issues, I really couldn't do that for the finished product, and the chapters ended up being pretty long as it was. So I split them up and what had originally been a ten chapter novella expanded and became a twenty six chapter novel.

Aside: I ended up having to add in about 12,000 words because when I started actually writing, the "in print" requirements for my chosen publisher was 50,000... and about two weeks before I was ready to submit it, they made a jump in the minimum word count to 60k. Which was fine, it allowed me to go back and add in some scenes that I had thought about, but not actually written, - including the Christmas Kiss scene, which I will give you a special sneak peek later.

I am a very aural sort of person. First of all, I suffer from a chronic condition called tinnitus - ringing in the ears. I have no idea what silence is, I've never heard it. My head is always buzzing and has for as long as I can remember. When I was five, I thought ghosts were talking to me. One thing that keeps me sane is music. I almost always have the music on or some sort of white noise generator. I'm very sorry to all my college roommates who didn't know why I insisted on sleeping with a fan on, even in the dead of winter. And I'm a major music collector. I'm always on the lookout for something new, obscure, cool, to listen to. I have over 25,000 mp3s. They're all legal. Yes, I could buy a new car for the money I've sunk into my music collection.

(Not all of them were expensive, though. I buy CDs at yard sales and estate sales and the thrift store. I'll take a box of CDs, without even flipping through them, and buy the whole lot for $50....)

And I have great recall for music; even now, hearing Cindi Lauper's "Time after Time", will take me back to the first time I heard it, and the book that I was reading. So, naturally, I tend to set up playlists when I'm writing; it helps drop me immediately into the "book mood."

So, I thought I'd share a few of the songs on my "Roll" soundtrack.

First off is Rainbow Connection
(http://youtu.be/jSFLZ-MzIhM)

The name of the Gay Student Alliance at my fictional college in Illinois (I didn't want to use a real college; I know it makes me roll my eyes when someone uses William & Mary and gets it wrong!) is The Rainbow Connection. I've always thought it would be a great name for a club, and the Henson Company is notoriously pro-LGBT.

My main character, Beau, is very southern. (Could he possibly be anything else with a name like Beauregard Jubal Watkins?) and I've included a couple of my favorite country music songs to get me into his head. I grew up in a pretty southern town myself and there are decidedly pieces of my life scattered in the background.

Among other things, Beau is a dancer, and country dancing is something he's done quite a lot of. This song lends itself to country line dancing quite well, and is a lot of fun to listen to. There's not much more that will get me in the mood to write a little Beau dialogue than Brooks and Dunn.

And this would kinda be the theme song for this book. The title track, so to speak. I think I speak for most of us when I say that college is a wonderful time to commit heinous mistakes. You date the people who are most wrong for you, you end up neck-deep in drama without any idea of how you got there. All of that while you're trying to deal with setting your own schedule, doing homework without someone to remind you, figure out your place in life with professors and advisors giving you conflicting advice, and in the back of your mind is that terrible, looming thought that you have to decide your whole life Right Now.


Anyway! For one reader who comments here, I'll give away a free e-copy of Roll. Don't forget to leave an email so I can find you if you win.

More contests are underway this evening at my Release Party on Facebook and if you sign up to attend, you'll be in the drawing for a Complete Roll Package!

College is all about finding yourself... but nobody told Beau that it was also about losing your heart. Can a farm kid from Tennessee make it work with a flamboyant rich man with a hidden past? 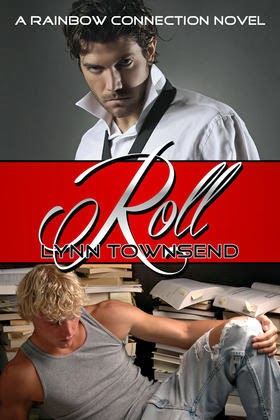 A farm boy from Tennessee, Beau Watkins spent high school living the dream: the cute girl, the popular, jock lifestyle, a loving family. As a freshman at an out-of-state college, he's determined to find out who he really is behind the Fake It 'Til You Make It attitude. He joins Rainbow Connection, the gay student alliance, hoping to find himself. Instead, he finds Vin Reyes. Raised by his grandparents and heir to a prosperous company, Vin has been out of the closet since he figured out what that meant. He has it all: fashionable clothing, fancy cars, huge houses, a real party lifestyle, and even a bodyguard. Most of all, he has a secret.

Uncomfortable with Vin's generosity, Beau fights his growing attraction for the president of Rainbow Connection, chasing instead a series of shallow affairs. Vin's never been denied anything that he wants, though, and now he wants Beau. But it's not until an old rival puts Beau in the hospital that Vin realizes that Beau means more to him than a simple love affair. Can the two of them bridge the gap between their worlds and roll with the all the punches life will throw at them?

"Gawd," he muttered, "you're being just as crazy as a road lizard."

Beau sat up in the bed and scrubbed at his face with one hand. He hadn't eaten much, with his stomach tied in knots. The food -- as fantastic as it probably was -- had been unfamiliar and ritzy. It had probably all been delicious, but his nerves wouldn't let him enjoy it. Baked Camembert and sundried tomatoes. Pear slices wrapped in smoked ham with almond slivers. And what the hell was crème fraiche? And who the hell had fish for Christmas dinner, with or without toasted shallot vinaigrette?

"And what's so wrong with baked turkey and dressing?" Beau said. The room didn't have an answer. "And now I'm sitting here in the dark by myself, talkin' to myself. Fan-freaking-tastic."

There'd been pie, he recalled. Three different sorts: one mincemeat, one apple-enchilada thing that didn't really look anything like pie as Beau was familiar with the term, and one honest-to-God pumpkin pie.

His stomach really wanted to crawl out of his mouth and go hunting for food on its own.

What was the worst that could happen? Beau slipped out of bed, his joints popping softly in the darkness like those last few, stubborn kernels of popcorn.

Beau shook his head; it was getting pretty bad when his internal monologue was making food analogies. He pulled on his sweatpants and padded, barefoot, out into the hall, down the stairs, and back toward the kitchenette.

Cold fridge light spilled everywhere, shining brilliantly into Beau's face. "This thing's larger than my dorm room," he said. Everything was ingredients. Fresh fruits and vegetables were lined up neatly in their crisper drawers. Cheeses and wrapped paper packages of sliced meats snuggled in the drawer. Plastic cling covered a defrosting roast.

"I thought I heard you get up," Vin said, sliding up behind him and wrapping warm arms around Beau's stomach. "Hungry?"

Beau suppressed the urge to leap out of his own skin.

"Don't you people believe in leftovers?" Beau gestured at the industrial-sized appliance in annoyance, trying to calm his heart. He was certain that Vin could feel his heart throbbing erratically in his chest and not entirely certain what emotion it could be attributed to. Was he startled, guilty, or just excited to be up, in the dark of night, with a handsome man's arms around him?

"Camilla takes it over to the homeless shelter, after dinner," Vin explained. "We always have more than we need."

Great. Add a heaping helping of feeling greedy to his already full plate of less than pleasant emotions. "You've missed out, babe," he said, "if you've never raided the fridge for a leftover turkey sandwich."

"I'm not missing out right now," Vin said. He nipped at Beau's ear. All of their own accord, Beau's arms went around his boyfriend, pulling him closer. Vin backed him up, braced against the cool steel of the fridge and gently, slowly, traced a line of kisses from Beau's ear to the corner of his mouth. The faint rasp of Vin's stubble against his upper lip drove Beau crazy.

"Oh, would you kiss me already, for Christ's sake?" Beau demanded, grabbing a handful of Vin's unruly hair and pulling his mouth down.

"How about I get you some pie before you wake up the house," Vin said, laughing. "I know where Camilla keeps her stash."

Beau warred with his two hungers. "Kiss, first," he said.


Lynn Townsend is a geek, a dreamer and an inveterate punster. When not reading, writing, or editing, she can usually be found drinking coffee or killing video game villains. Lynn's interests include filk music, romance novels, octopuses, and movies with more FX than plot.

Blog: Paid by the Weird - http://paidbytheweird.blogspot.com

Hi, Lynn! Welcome to Beyond Romance and congratulations on the release of Roll. I like the excerpt - it captures the social disparity between the two protagonists really well, and conveys the heat between them too!

Actually, I believe that song titles cannot be copyrighted, just song lyrics. So you could have stuck with your plan. In any case, the musical background enriches the understanding of the story.

Oh Lynn, I sympathize with you about the tinnitus. I also have no idea what silence is and like you I absolutely could not live without music. Luckily for me my daughter grew up to become a music journalist so she's constantly introducing me to new bands that I would not hear of otherwise. :-)

Congratulations on your book, Lynn! I think we both know some things about making mistakes in college. ;)

Sounds like a wonderful book, count me in for a chance please! On the subject of tinnitus, my father-in-law (who turns 95 next week) has suffered from it since his time in the 2nd World War. I know it just about drove him crazy until he learned how to try and live with it. Luckily there was a tinnitus organisation here in Australia to help him.
Kelsey
kelsey@netspace.net.au

Those are some awesome songs, thanks for sharing and for the giveaway!

Congrats to Kelsey for winning a copy of the novel, thanks to everyone for participating...