Ending with a Bang

I’ve always found endings to be the most important part of a book (most important part of a bunch of other stuff too, but I won’t get into that now). As a reader, if a book doesn’t end the right way (a.k.a. the way I want to) it can be very disappointing for me. If the hero doesn’t get the girl, or mystery is solved without enough build up, it can change my entire view of the book. Nothing frustrates me more than a plot line that goes unfinished, besides maybe one that gets to easily wrapped up, can sour my entire opinion about a book.

It is due to this belief that I work very hard on the endings for my books. I want the readers to be satisfied by how the story ends. I do try to leave wanting more, like the next book. But I also want every story line from that book to be tied up, and the reader to be left with a warm feeling. After all that’s what I write romance to feel, that warm loved feeling. 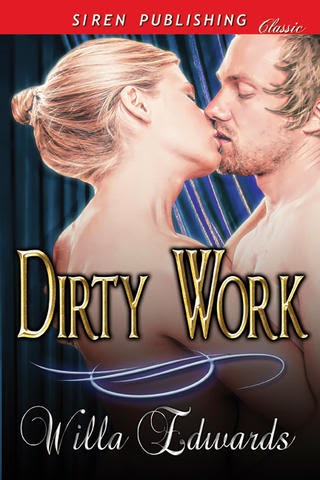 So for my most recent release, Dirty Work, I put even more pressure on myself to finish this book with a bang. Since this book is the last in my Naughty Holiday List series. Not only was I writing the ending of this story, which I prize, but the end of an entire series. I really wanted to end this series with a special bang, since it is such a special collection to me. This series started my publishing career, and I learned so much from writing them. I wanted to give the characters that I have come to love all the happy endings they deserved, without being so sappy sweet that everyone who read it got a few new cavities. I wanted it to sound real, like it could actually happen to any of us.

What I decided to do was write an epilogue that summed up all the stories in the series. It’s a quick four or five pages, but gives every couple their due. This is the only book in the series I have added an epilogue to, but I felt it was fitting with this final installment. This epilogue is my love letter to those who have read all the books of the series. I hope all those who have enjoyed the other Naughty Holiday List series books, and even those that have just read Giselle and Garrett’s story, will enjoy this fitting end for a series that has meant so much to me.

Below is an excerpt from the beginning of my newest release Dirty Work. To find out how it ends…well you’ll have to buy the book for that!

In honor of October being Breast Cancer Awareness month, and to celebrate the release of Dirty Work I’ll be donating one dollar for every comment I get on my blog between now and Oct 31st, to the National Breast Cancer Foundation. Please stop by, leave a comment, and help me provide mammograms to women in need.

If you want to find out more information about how you can help provide mammograms to those in need, or find out more about preventing and diagnosing breast cancer you can go to

As her friend's wedding approaches, Giselle Rossini feels more discouraged than ever. She's not where she wanted to be in life. She loves her job, but longs for something else to fill her days.

When she walks into her ex-sweetheart Garrett at her school, declaring he's the new auto shop teacher and he wants her back, Giselle finds her last refuge quickly vanishing. Years ago she loved Garrett, but all he did was break her heart and prove to her men are all the same.

Garrett Montgomery never stopped loving Giselle. And now he's back, determined to work his way into her life. He's not surprised Giselle isn't ready to welcome him back into her arms, but he'll do anything to earn her trust again. Garrett's never been afraid of a little hard work, especially when it includes some dirty talking and getting naughty in the backseat of a car.

But can he break through Giselle's perfect impregnable shell and into her heart, or will the labor be too much for him to withstand?

Buy Link: http://www.bookstrand.com/dirty-work
Story Excerpt
“Garrett?”
“That’s right, darlin’.” He smiled that wicked, devastating grin that had always been her downfall, his deep Southern drawl enough to melt any woman’s panties, and he certainly had hers, many times. Just as she always remembered him, he had a smudge of motor oil across his forehead and along his chin. He always got the stuff all over himself. Which only made him look sexier.

He took a step closer to her, invading her space. His spicy, familiar scent of motor oil and aftershave swirled around her, and her heart sped up a bit. She knew she should step away, run, flee. Anything to escape Garrett and the emotions he’d stir up in her. But she couldn’t move. Her feet were frozen to the cement auto shop floor.

He traced a knuckle down her cheek, her skin tingling beneath his touch. “It’s been too long, sweetheart.” His thumb smoothed over her bottom lip, his eyes focused down on her mouth. “I’ve missed you.”

As if his words broke some kind of spell over her, Giselle stepped back, severing the connection of their bodies.

Her head swam and her heartbeat sped up. How could this be? How could Garrett be here? After all these years. After all this time. Why would he come back now? Today of all days.

“What are you doing here, Garrett?” She crossed her arms over her chest, using the small gesture as another barrier between their bodies.

He smiled. “I’m getting ready for my first class. What are you doing here?” He cocked an eyebrow at her, but the smile on his face remained.

“You’re the new shop teacher?” Giselle focused on breathing, when he nodded in return. The reality of it slammed into her like a ton of bricks. She’d have to see him every day, walking through the halls, talking to the kids, working on the cars in this shop. He’d come into the teacher’s lounge with dirt under his fingernails and grease on his face. Leaving her in a permanent state of confusion.

“Garrett, what are you doing here? Why did you get a job at my school?” She took another step back, trying her best to appear casual, and not like she was running away. Which, of course, she wasn’t. But being close to Garrett had always been confusing. That’s how she’d gotten into the trouble before. That’s how she’d allowed him to push past her defenses.

“My daddy passed a few months ago.” He looked down, pushing his hands into his pockets. The sadness in the small gestures was apparent. Garrett loved his father. They’d been very close, even when they lived hours apart.

“I’m sorry to hear that. Hayden was a great man.”

Garrett nodded. He looked up at her. His sad eyes staring right into hers, pulling at her heart so hard it was difficult to breathe. The urge to walk up to him and wrap her arms around his neck, to pull him close, to do anything to erase the sadness in his eyes, battled through her system.

“I made him a promise,” Garrett continued, unaware of her internal struggles, “on his deathbed that I’d go after the girl I’d been pining for all these years.” He took a step closer, filling in the distance between them in one long stride.

Giselle took a deep breath, her knees knocking together. The urge to flee filled her, but she fought it back. She wouldn’t run from him like a scared rabbit. Not this time. She wouldn’t give him the satisfaction.

“I never stopped thinking about you, Dixie.” He extended one finger to smooth across her cheek. Heat flared beneath his touch and the desire to melt into him, like two metals fused by his welder, flamed inside her.

He stepped closer, until their bodies just brushed against each other. His warmth called to a place deep inside her. “I never stopped loving you, Dixie. All these years.”

His rich, chocolate eyes focused on her, warm and sweet. Those eyes had always been her undoing. One look from him and she’d forgive everything.

“I’ve come back for you, baby. And this time I’m not leaving without a fight.”

Willa, I write series, and I like to tie up all the loose ends pertaining to the book I finish. Since, I write romantic suspense, I like to leave a bit of a teaser to lead into the next book.

I'm glad you found a way to wrap up the whole series. I think that is wonderful for you to do that for the readers.