The Queer Female Gaze: The Second Mango and Breasts

They're on a lot of people's minds. If I asked you to picture someone who's into women's breasts, you might picture a straight boy in his early teens, just discovering that women's bodies can be fun to look at, or maybe what sprang into your mind is an adult man who can't seem to resist talking to women's chests instead of respectfully looking at their faces.

You wouldn't think of a young woman, right? 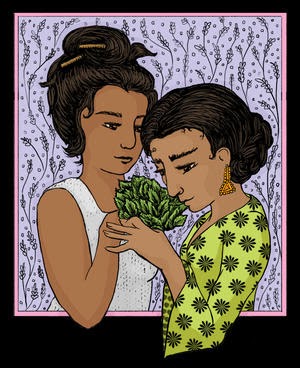 The heroine of my newly released queer feminist fantasy novel, The Second Mango, is Queen Shulamit, a twenty-year-old with plenty of reasons to feel different and isolated. Since women of royalty in fairy tales are often imprisoned in a tower needing to be rescued, one might say her tower is her isolation--mourning her recently deceased father, misunderstood and disbelieved about her multiple food allergies, and alienated from her heterosexual peers as the only lesbian she knows. One of the ways she's aware she's inconveniently different from other women is her fascination with breasts.

I was eight when I can first remember noticing that I liked looking at boobs. I didn't know what that meant, because, like many queer kids in the 1980's, my exposure to All Things LGBTQ+ was extremely limited and biased. I'm fairly sure I'd never encountered the idea of bisexuality, because as a kid my image of queer people were those who only liked their own sex 1. to the exclusion of all hetero romance and 2. to their peril and ruin. I knew not to blame "them" (us) for it, but I also saw "them" (us) as utterly doomed and wasn't it sad. Not because we were going to hell -- that's not a part of my faith tradition -- but because we would be Shunned. But anyway, since I'd never heard that you could like men and women, and since I'd had crushes on older male celebrities since I was six years old, it never occurred to me that my breast fixation meant that I liked women, too. 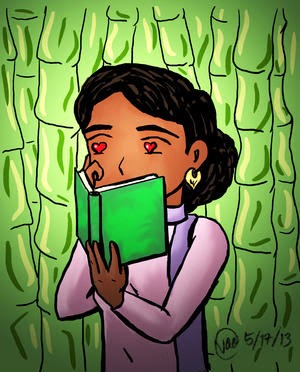 I remember calling them "blossoms" when I had to talk about them for whatever reason. I remember being fascinated if a woman was topless on television, and I remember sneaking looks at Playboy when I saw it in a gas station once. My stepmother, in an attempt to counteract my mother's second-wave feminism, bought me a Barbie doll -- I promptly painted the doll's breasts sparkly purple with nail polish. Why? I wanted to do something with them, but I didn't know what there was to do.

I was never so much fixated on growing my own set, and from what I've heard from friends as an adult, I haven't changed my mind. Between the backaches and the unwanted attention, they sound more like trouble than anything else. The only reason I've ever wished for more than the flat little afterthoughts on my chest is because it would be a lot easier to shop if I fit into "women's clothes" (ha. Isn't that all of us, for one reason or another?) 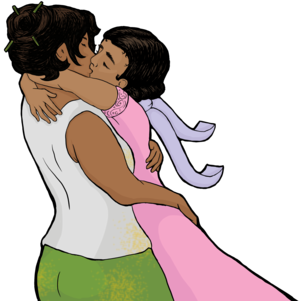 Bodily autonomy means that our bodies belong to us and us alone, and we should respect other people's bodies as not being our business unless they want it to be our business. Lesbian erasure and invisibility had unintentionally taught me that those who looked at boobs sexually were often predatory men, and never young women. Imagine how that made me feel, especially at the age when everyone feels like they're the only one. Even as an adult, learning to reconcile my strong belief in bodily autonomy with my attraction to the same body parts that many invasive men have preyed on was confusing and difficult.

Shulamit, in my book, faces these same dilemmas. She's eager to express her appreciation of a woman's curves, but she's also afraid that admitting this attraction will somehow rob her of the femininity with which she so strongly identifies. In a world, much like our own, where those gazing upon women's bodies with appreciation are assumed to be male, can we blame her? 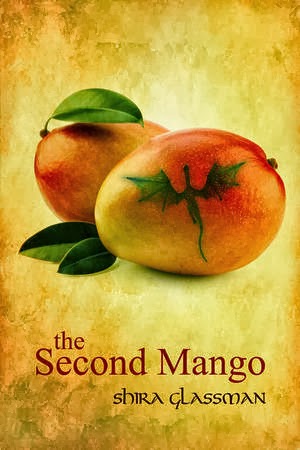 She also strives to find balance between her strong fixation and her equally strong ethical compunction towards consent and bodily autonomy. While dusting off a group of imprisoned women who've been turned to stone, she realizes she's attracted to the woman she's cleaning and asks Rivka to finish the job.

Shulamit’s hands were slower and gentler on this one than on the others, and she couldn’t help wondering what the woman was like. Had she come here out of deep religious conviction and a desire to serve her fellow humans? Or was she living within these walls in order to hide from the outside world? Did she like to read, and if so, did she prefer stories or lessons? With a rush of heat to her cheeks, Shulamit realized she couldn’t bring herself to polish the woman’s entire body—not her bosom. She knew she would enjoy it and couldn’t live with the guilt of reveling in such a moment at someone else’s expense. Especially if the woman was awake inside the stone. “Riv?”
“Your Majesty?”
“We’re switching.”
We live in a society that declares that breasts are so inherently sexual that a parent using them for their biologically intended purpose, to feed a child, is often asked to cover up because some people consider it "obscene". Breast cancer activism is often reduced to "save the ta-ta's". I do want to live in a world where someone's breasts aren't considered automatically sexual when they haven't been assigned that function by their owner. But at the same time, lesbian and other queer woman-on-woman sexuality is silenced and suppressed and ignored enough, and I also want the next generation of little me's and little Shulamits to know that their attraction to breasts, or a woman's tush, or whichever part of women they like best, doesn't make them a freak or "the only one" at all. As long as we do so respectfully and without making it a problem for our partners or whoever we're admiring, our attractions should be acknowledged as real and valid at least as much as heterosexual men's are.

The Second Mango tells the story of a young woman's search for love, family and her own strength with the assistance of her dragon-riding bodyguard. If you've ever wished for a fairy tale to end with a happily ever after for two queer women, or if you like sexy older men (there is a strong hetero romance subplot as well!) or just like to read very woman-centered fantasy, check it out. It's available from Prizm Books in four eBook formats: ePub, mobi, html, and pdf. It is for sale on Amazon in print and for Kindle, and also available in print from Wild Iris Books, Florida's only feminist bookstore. The sequel, Climbing the Date Palm, is scheduled for publication next July.

Leave a comment with your email, and you'll be entered to win a copy of The Second Mango!

News Flash! Monday 21 October only! Get 10% off all books at Prizm Books (my publisher) and their parent, Torquere Press. Just use discount code fall2013.


Buy The Second Mango at Prizm!

Buy The Second Mango at Amazon

Thank you so much for letting me guest post! Just a quick note that the artwork above is the work of Jane Dominguez and Mina V.

I'm delighted to have you here at Beyond Romance. I absolutely love the art work - as well as your message.

I've always been attracted to both women and men - but I didn't have a label for this confusion until I was well into adulthood.

Great column. Very thought provoking. I can tell you now that you were not the only one who liked looking at women's breasts. I did also growing up and I still do. I find women's bodies beautiful. The older I get the more I realize that I don't have to stay within the boundaries I was taught as a child. I may not look at a woman's body in a sexual context. Sometimes I just think a woman is beautiful. I also am gaining an appreciation for men's bodies as well and not in a sexual way. I like the nude body. I love the beauty of it--the skin, the way the muscles move beneath the skin, the way light and dark play with it. I recently was surprised when for the first time I was sexually attracted to a woman and she was fully clothed but the way she presented herself was so erotic. As I age I realize I have been trapped within the childhood teachings that have no meaning to me now. I am a very late bloomer but I find joy in learning and reteaching myself that it is okay not to follow what is called "the norm."

So I guess you won a copy since you commented--how can I email it to you?