Welcome to my world (I mean, the one I created)

As always, I’d like to start off with a big ‘Thank You’ to Lisabet for having me as a guest today.

Recently, I reached out and asked a simple question – what do you want to know? I want to take the opportunity to answer people’s questions about me or my books. And I will say I got some pretty awesome questions from the lovely Lisabet herself. So, I selected a few to answer. :)

Is it all one universe, or is each book separate?

For anyone that hasn’t read the series, you’re about to get a spoiler with this question and may want to move on to the next one! It is all one universe. In my ‘world’, Pavarus is actually where it all began. The humans, vampires, and dragons found portals that allowed them to travel to different realms within the same world – one of those realms being Earth. From there, it was the humans that left Pavarus to claim Earth as their own. Over time, the knowledge of Pavarus was lost amongst the humans on Earth, that is why Wes has no idea what’s going on (in the first book) when he falls through a portal and into Pavarus.

In what ways is your world different from ours?

The Earth ‘side’ is just the same as ours is now, but Pavarus is more or less stuck in the lifestyle of  Medieval times – castles, swords, lords, peasants, their clothes, etc. Keddrick, sire of the vampires, chose to not follow in Earth’s footsteps and decided that his world should remain simpler than Earth. Though, simpler doesn’t always mean easier, if that makes any sense.

Would you ever want to live there?

This one’s easy. Yes, but only if I’ve got a hunky vampire warrior as a mate. ;)

Now, I hope you all enjoy a teasing excerpt from my upcoming release, Airos: Finding Home Series book 3. Currently, Airos is up for pre-order at Total-E-Bound at a 15% discount! But come this Friday, October 18th, you can buy Airos at a 10% discount and read it right away. So, don’t miss out on the savings!

Zane has everything in his life under control and in order, but can he keep it that way when a young dragon is thrown into his life? 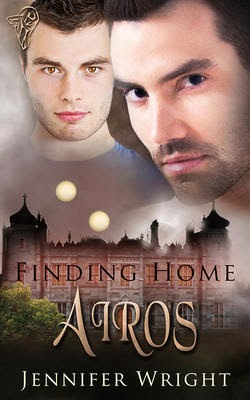 Zane was meant to be a warrior—end of story. Though he may not have had the most pleasant life living at the coven, he still loved being there. But the steadiness of his world came to a halt all within one day’s events. A man he never saw coming has pushed the boundaries of what little normalcy he has, and learning of a secret love is just confusing him even more. Zane has never felt more torn on what he should be feeling…and for whom. Though, if he assumed having two men plaguing his every waking thought was hard enough, learning of the danger his mother is in nearly has his head spinning off into another dimension.

The leader of the Dráguns is threatening to take everything away from him, his best friend is slipping further and further away from him, and a little dragon is managing to get under his skin in more ways than one. Sorting out what he has to do, what he wants, and what’s right for him will be the biggest challenge he’s ever been faced with. Will he follow his heart or will he take the easy path…or is the easy path the right path to begin with?

Bo waited for Wesley to knock on the bathroom door but nearly shot up out of the water when Zane came bursting in.

“Dear gods, Zane, you nearly scared me half to death.” He let out a deep breath and placed his hand over his chest, his heart thundering beneath his touch. “So, how did everything go with…?” He trailed off as Zane stormed over to him, the heat in his eyes making Bo sink down into the water a little.

“What are you doing?”

Bo felt so small as the vampire towered over him, but he wasn’t about to show the thin line of fear the man always seemed to make him feel. “What does it look like I’m doing? I’m bathing.”

Stepping closer, his hands fisted at his sides, Zane growled out, “That’s not what I mean and you know it.”

Bo glanced away. I can do this. I can be strong.

Turning back, Bo gave Zane a look of innocence. “What?”

Zane’s lips briefly thinned out in a tight line. “Why are you still here?”

“You heard Augustus, he didn’t think it was a good idea to travel,” he replied, swishing the water around him as if nothing was wrong—as if he didn’t notice the vampire’s rising annoyance.

Suddenly Zane was at his side, kneeling on the floor next to the tub. “That’s bullshit! You risked your life earlier by climbing down the side of a castle—all so you could get away from here. Then you had every opportunity to go home earlier, but you didn’t. Why?”

Bo glanced away again. This wasn’t going at all the way he’d imagined. Yes, he had hoped to talk to Zane privately, but he’d never thought it’d be like this. Steeling his shoulders, he said, “Yes, I tried to escape, but that was when I had thought that I was still a prisoner. Keddrick made it clear that I am now a guest, so I felt it was best to take Augustus’ advice—for my own well-being.”

Zane’s eyes narrowed. “I don’t believe you. I saw the way you looked at me. Why did you look at me like that? What were you thinking?”

Gods, this is not at all how I imagined it going. “Can you please hand me a towel?”

A muscle flexed alongside the vampire’s jaw and he made no movement to do as Bo had asked.

Huffing, Bo got up and stepped out of the tub then retrieved a towel from a nearby shelf. He ignored the small growl that echoed in the room. All he had wanted was a chance to get to know Zane, to find out what this bond between them meant. He knew Zane had said he didn’t want Bo here, but he hadn’t expected the vampire to act this way at his staying for just one more evening.

Bo spun around to face him. “Why do you care!” he shouted. “What does it matter if I’m here another night?”

“Because you confuse me!” Zane hollered back.

The vampire almost seemed surprised by what he’d said, but the look was gone too quickly for Bo to be sure.

Zane rubbed his hands over his face then let out a frustrated sigh. “My life was balanced before, and since you’ve been here you’ve done nothing but trip me up.” He glared down at Bo. “I’m doing things that I never would have done before. I’m saying things that I would have never said. And I can’t seem to stop it. It’s all because of you.”

A fire ignite inside Bo and he glared right back at him. “Well, I’m sorry that I messed with your precious structure here.” He stepped forward and Zane took a step back, his eyes beginning to widen the closer Bo got to him. “Believe me, that was not my intention at all.” Bo kept advancing on Zane, and Zane kept stepping back until he bumped into the counter. “But don’t worry, I’ll be out of your hair first thing tomorrow evening, because trust me when I say that I don’t want to be here just as much as you don’t want me to be!”

He was now mere inches from Zane—practically standing on his tip-toes so he could at least get somewhat face to face with him. Anger raced through his veins as he waited, preparing himself for Zane to yell back at him.

Bo gasped when Zane’s hand was suddenly around the nape of his neck, pulling him closer, closing what little distance was between them. He stood there frozen in place as Zane kissed him, completely shocked by the vampire’s actions.

The kiss was bruising and over within moments. At first Bo stared up at Zane in disbelief and confusion, but that quickly melted away at the sight of the passion in the vampire’s eyes.

“Dear gods, what you do to me,” Zane growled, then kissed him again.

I was born in Arizona, but have spent the better part of my life in Wisconsin.  While I enjoy living close to my family, my heart longs to live in the South – or anywhere where the winters are warmer, and I hope to someday get there.  I love writing, and try to dedicate as much of my free time to it (ha! what free time?).  If I’m not typing away on my laptop, you’ll find me with my nose buried in a book, or with my loving boyfriend debating on what movie to watch and the never ending back and forth decision of what we should have for dinner.  I love spending time with my family and boyfriend, cuddling with my two cats, and laughing as much as possible (cuz I like to think I'm funny :-D).

Some little tidbits about me are – I love horses and cats, I have a really big sweet-tooth, and I've been told I like to talk with my hands (insert hand gestures here).

Where you can buy my books –

Where you can find me –

It's great to have you back here at Beyond Romance. Thanks for clearing up some of my questions about your fictional universe. (Your books are on my TBR list - but my TBR list is LONG!)

I really love the cover for Airos, btw. The two men look so intense! Otherworldly, in fact.

Good luck with the new release.

Thanks for having me, Lisabet, it's good to be back!
*blushes about the cover* Thank you. Airos is my favorite. :)
And I hear you on the long TBR list - I've got some of your books on mine too.

Great excerpt Jen!
I'm just waiting for Airos to come up for VIP download and then it's mine :)

Loved the excerpt and can't wait to read the book.
sstrode at scrtc dot com