As soon as you tell someone you’re a writer, it’s often the first question you’re asked. For me personally, it’s the most daunting one as well. Don’t get me wrong. I completely understand where the question is coming from. I live in ex-pat dense Hong Kong and the favourite way of starting a conversation here is with a casual, “What do you do?” (Along with: “Where are you from?” and “How long have you been here?”)

I’ve seen many eyebrows arch up in surprise when I reply, “I write lesbian erotica.” It makes quite a difference to saying you’re a banker, or teacher, or IT consultant. People are taken aback by it and it’s as if their brain can only process by following up with, “Where do you get your inspiration from?” Every time, I’m stumped for words. Even after having faced the same question so many times, I never really know what to say because the answer is always complicated and never clean-cut. It helps that I’m a lesbian and my wife is usually around so I can just point at her and quip that we’ve been together a long time and she still inspires me. Cue awkward giggles. (But they asked for it.)

But, luckily, a solution for this social predicament I often find myself in (and I bet I’m not the only one), presented itself when I started writing my latest novelette I Still Remember (http://www.harperbliss.com/i-still-remember/). If the title seems familiar, it’s because it is. I Still Remember is Bloc Party’s prettiest, most emotional and nostalgic song. And my story is entirely based on it. The song came on randomly one day when I was listening to an old playlist and it just clicked. I hadn’t heard it in a while (possibly years) but I connected with every word of the lyrics in such a direct and emotional way that I instantly knew I had to write a story about long lost love and unrequited feelings that come back to haunt you from your fragile teenage years. This is also when I realised that inspiration comes in many shapes and sizes, but what works best for me personally is a strong emotion. Try explaining that at a cocktail party when you’ve had a few…

If you’d like to know if I captured the emotion of the song and did its emotion justice, I’m giving away a free copy to a lucky commenter. (Lisabet says to remind you to include your email address!) 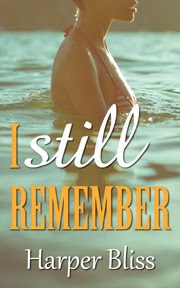 Successful news anchor Elise returns to her hometown after running away from a love she couldn't understand nor act upon twenty years ago. When she bumps into her old best friend Amy, the one she had to get away from, all that was left unspoken bubbles to the surface and they revisit the past in more ways than one.

And here’s an excerpt:

I first felt it when I sat in my familiar spot by the edge of the pond, timing Amy as she tried to swim as fast as she could from one side to the other. My job was to focus on my waterproof watch—something I’d always done with great determination before—but this time around, I couldn’t keep my eyes off Amy as her body cut through the water towards me. It was an afternoon of just us, before Brett appeared on the scene and stole precious moments of our time together.

I didn’t know what a lesbian was and I had no idea it was even possible for a woman to fall in love with another woman. But when Amy pulled herself out of the water, drops raining down her skin and lingering in her hair, I knew I was in love. I knew because not only did the sun catching the hazelnut in her eyes look like the most beautiful sight in the world, but later that afternoon, when I had to go home for supper, it suddenly hurt that I couldn’t spend every waking moment with her.

“You weren’t timing me,” Amy said, her hands on her hips and, to punish me, she swung her head from left to right so the cool drops of water splattered from her hair onto my hot skin.

“Stop it.” I looked up at her, at the grin on her face, which all of a sudden seemed unbearable as well as totally addictive. Because I had no idea how to handle myself, I pushed her back into the water, jumping in right after her, because I didn’t want her to swim away from me.

She ducked under and yanked me down by the ankles and, just like that, an innocent game we’d played all of our lives caused my body to pulse in places I’d never paid much attention to before.

Buy your own copy of I Still Remember!

Harper Bliss has travelled the world in search of sexual satisfaction. She now resides in a hot Asian country and dedicates her time to writing down the stories that have inspired and aroused her.

Harper has had short stories published in anthologies by Xcite Books, House of Erotica, Storm Moon Press and Coming Together. She is the author of the High Rise series and several other titles for Ladylit.

Welcome to Beyond Romance. Do you really make a living writing lesbian erotica? I'm thoroughly impressed.

And I definitely get the awkwardness. Anything to do with sex - even straight sex - makes people uncomfortable. Throw in the lesbian angle and they want to run away screaming.

Hi,
When asked what do I write I tell them the truth.
Lesbian erotica, TS, TV, hot lesbian erotica.
If they have problems with it, it's their problem.
They asked the question.

thank you very much for having me! I'm honoured.

And yes, I do make a living of it. It always baffles me when people claim that F/F erotica doesn't sell. This has not been my experience at all. Obviously, this did not happen overnight... and if I've learned one thing it's that lesbian erotica readers are a very loyal and lovely bunch who love to support indies.

Wonderful post. I get the awkwardness every time someone finds out I'm a blogger, and then I tell them, oh, I review romance, erotica, GLBT, BDSM...oh, and by the way, I happen to also be a nanny in school to get my teaching degree. Yeah, doesn't go down so well usually. I love your answers and what you said about music. I speak through music, it's a huge part of me, and I think that's the perfect answer you gave. And if they don't like it, tell 'em they can go suck monkey balls. Works for me :)