Greetings everyone! It's Sunday again, time for those kisses you all love. But today is not just any Sunday. Today Victoria Blisse is celebrating her 100th Sunday Snog (it's my 94th!) with a bit of a blog hop, and I'm celebrating too!

Every single participating author is giving away a prize. Here at Beyond Romance, you can win a $10 bookstore gift certificate, just by leaving a comment with your email address. Visit Snog Central (http://blissekiss.co.uk) for links to lots more authors with prizes (and kisses) for you to savor.

However, our Hundreth Snog Hop isn't just about lip locks and swag. Kisses are for sharing, and we're trying to do our part. Our chosen charity for this event is one of my favorites, Medecins Sans Frontieres. (In fact, I edited a book entirely to benefit MSF. You might consider picking up a copy...!) So after you've left your comment, why not go over to our page at Just Giving (http://www.justgiving.com/sundaysnog) and make a donation. Even the smallest amount is welcome.

To encourage you - I will also give $1 to MSF for every comment I receive on this post.

Tell your friends! The hop runs until the 27th of September, and you've got dozens of chances to win.


Ondine has always felt at home in the sea. Orphaned at birth and raised by her grandmother on the island of Martha’s Vineyard, she has never really questioned her extraordinary affinity for the watery world. She concentrates on her work as a marine biologist, spends her weekends relaxing among the waves, and worries about human threats to her beloved ocean environment. Fears of a deadly pregnancy like her mother’s make her cautious about sex.

Ebony-skinned Marut has his own talents – aside from his uncanny ability to swamp Ondine with desire. He can control the winds and summon storms. He informs Ondine that they share a supernatural heritage and claims she is his destined mate. She responds with scepticism and tries to resist the charismatic Haitian, but ultimately her scientist’s training won’t permit her to deny the evidence of her senses – and her heart. As a brutal northeaster batters the island and Marut’s life hangs in the balance, Ondine learns that true power lies in surrender to her elemental nature. 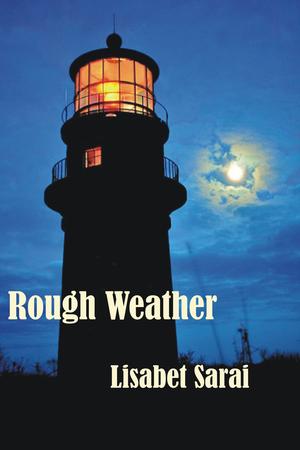 The sun beat down, hotter than ever. Sweat gathered under her arms and at the back of her neck. Ignoring the proffered permit, she planted her fists on her hips and summoned eve ry ounce of authority she could muster.

“This beach is private, reserved for Katama residents. What’s your business here?”

Stuffing the permit back into his tight pants, he sank into a crouch to pick up a piece of equipment that he had propped against a rock, next to a two meter steel pole. His thigh muscles flexed against taut denim as he rose. Her mouth felt dry and her pussy, wet. “I’m installing a temporary meteo-hydrographic monitoring station.” The device bristled with lenses, buttons and dials, the pinwheel of an anemometer, the tongue-like extrusion of a rain gauge. “Come on up, take a look.”

“Just a minute.” She stepped into her shorts, then pulled her shirt over her head, trying to ignore the sensation of fleece brushing across her naked breasts. In her bare feet, she clambered up over the knobby, rust-coloured stone until she stood beside him. He towered over her. She caught a whiff of sandalwood and coconut oil and was washed by sudden desire.

He pointed to a white plastic rectangle. “This is the hygrometer – the humidity sensor.”

“Yes, yes, I understand. You’ve got a laser ceilometer for cloud height, I see, and an infrared camera for thermal imaging...”

“What...?” She found his surprise gratifying, as he realised she wasn’t just a naked, blonde beach bunny.

“I’m a marine biologist. We use similar devices in my lab at Woods Hole. But Vineyard Airport has a full suite of weather instrumentation. Why are you installing this system here?”

“I’m working on the design for an offshore wind farm.”

“Wind mills?” Her indignation returned, blasting through her with hurricane fury. “Those spell death for sea birds!”

“And the awful, endless hum disorients cetaceans. They swim in circles until they starve to death!” She snatched the apparatus and held it above her head, threatening to smash it upon the rocks.

“Don’t! Please!” Seizing both her wrists in one massive hand, he pried the delicate gadget from her clutches with the other.

She did not fight him. Because when he touched her, her anger fled as quickly as it had arisen, to be replaced by irresistible, irrational lust. Her pussy was instantly molten. Her clit pulsed between her thighs. Electricity zipped along her limbs. Her modest breasts felt huge and heavy, aching for contact.

The stranger’s eyes grew wide. Sweat beaded his forehead. She dropped her eyes to his crotch. A visible bulk distended the fabric there, evidence that he shared her reactions.

Without releasing her, he placed the weather station upon an outcrop, then dragged her into a rough embrace. Their lips mashed together as they grappled, tearing at one another’s clothing in a desperate quest for bare skin. The rusty taste of blood flooded her mouth – she’d bitten her own lip in her hunger for him. His flavour was spicy with a burnt edge, like an autumn breeze. His brazen tongue mirrored the frantic dance of his hands on her flesh.

She wormed her hands into his trousers so she could grip the smooth, solid curve of his buttocks. The muscles tightened and shifted under her palms as he ground his hardness against her. Her shorts hung loose on her hips. He dragged them down to her knees and plunged his fingers into her drenched cunt, smothering her moan of delight with another fierce kiss.
Posted by Lisabet Sarai at 3:00 AM

Thanks for being a part of this... as well as sharing the snippet

Thank you for the chance to enter! Love the Snippet! wendynjason04@gmail dot com

When you said she was his destined mate I swooned! Luv.

Hard to believe that 100 Snogs ago I didn't even know what a snog was. Haha! Now I'm snogging too.

Can 't wai for Rough Weather to come out! turtle6422@gmail.com

Wow so many snogs... Thanks for sharing the snippet from Rough Weather!
greenshamrock AT cox DOT net

Some snog! Thanks for taking part in the giveaway and giving us that lovely snippet.

Thanks for making the donation to MSF. It's a great cause. I hope you get lots of comments.
catherinelee100 at gmail dot com

Another lovely snog Lisabet. I love a story where the attraction takes over :-)

Loved the snog, and I love that you're donating to such a great cause.

It's great that your donating to such a great cause. Thank you forthe wonderful excerpt.

100, and counting, is impressive. Thank you for the snog.

Hot stuff as always, Lisabet. You're our most consistent snogger, you know! Thanks for your generosity.

Thanks for the peek...looks like it will be a sizzling read!

THANKS FOR BEING SO GENEROUS!!

Sorry I couldn't be here to reply to your comments. Thanks so much for dropping by.

I know it has taken me forever, but I've finally drawn a winner. It's Linda B. (Hotcha). You rock, girl!