[Today I'm featuring Nia Simone's debut romance novel, The Last Straw. See the end of the post for information about the prizes in this blog tour. Also, the book is free at Amazon this week! ~ Lisabet] 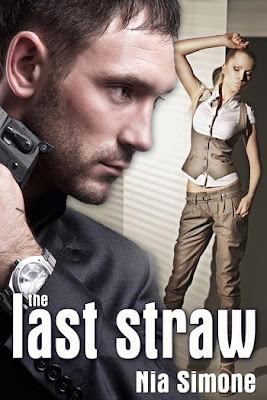 Ally Tobin left New York after one too many bad dates, determined to rebuild a stable life and career as a private investigator in Silicon Valley. But when the man she knew as one name walks into her office with another, will her curiosity once again lead her to risk her heart?

The last thing Special Agent Jared Green needs is "security risk" stamped on the resume of his latest undercover identity. Especially by the woman his job forced him to leave in New York without any explanation. She may threaten his cover, but it's his heart on the line.

He's good at playing a part. She's good at catching a fake. Can they trust enough to give love another chance?

He sauntered through the door, a white, button- down shirt tucked into belted khakis. When his dark gaze found her, he stopped. Stared. Her throat dried and a rustling motion stirred in her abdomen.

Keep your cool, she commanded herself, standing and reaching across the desk. His hand was rough.

She yanked her hand back and waved at the chair. “Please, have a seat.” He waited for her to sit before settling in the visitor’s chair. “So, Darren, according to this, you’re being considered for a programmer position in the IT department. Tell me about your background.”

A professional mask settled over his features. “As you can see on my résumé, I have several years of consulting experience.”

“Tell me something about your experience as a mechanic.” Working on his prized old Mustang had been a favorite hobby.

The corner of his mouth twitched. “What do you mean? That’s not in my résumé.”

“You don’t have the hands of a programmer. More of a mechanic.” Oh, his hands.

“Okay, you got me.” He was going to confess. This should be good. “When I’m not programming computers I’m working on my car.”

“And what were you doing in New York City?”

He reached across her desk for a piece of paper, plucked a pen from its stand and scrawled something. When she took the note their fingers brushed. Meet me for dinner at Pico’s at 7. I’ll explain everything. Can’t talk here. 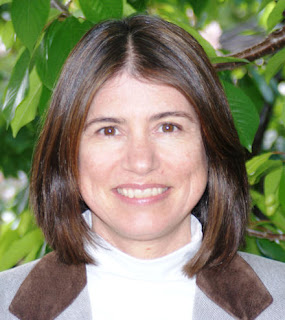 Nia Simone grew up on the side of a ski slope in Squaw Valley, USA. Later, while learning the craft of story writing, she worked in nonprofit and then high-tech.

The best part of working in the computer field was meeting her husband. He took up skiing and she helped him document his computer inventions! They live in "Silicon Valley" in California where their favorite thing to do is cook together for friends. Nia’s specialties are dessert and veggies while her husband’s are entrees and sourdough bread.

Their only pet at the moment is the sourdough starter, which lives in the fridge and requires bi-weekly feeding.

Nia blogs every day about travel, food, writing, books, skiing and photography at niasimoneauthor.com (where she won the Versatile Blogger Award and Inspiring Blogger Award).​

As part of her blog tour, Nia will be giving away a $25 Amazon gift card to one randomly drawn commenter. Be sure to include your email address in your comment.

Enhance your chances of winning by visiting the other stops on her tour. You'll find them here:

Hi Lisabet! Thank you for hosting me on my debut blog tour! Love your super organized and very successful blog.

Visiting readers, there's a lot about me today, so how 'bout you? All you have to do is say hi to be in the raffle for the prize. But if you would like to answer this question, I'd love to learn a bit about you too. What is one of the happiest moments of your life? A moment when you felt like you were floating? For me, there have been a few high points. One of them was when I received the "Yes" from The Wild Rose Press for The Last Straw. It was more than a moment. I floated for a week. And yes, I cried.

Thank you for coming by and reading!

Looking forward to reading this one! turtle6422@gmail.com

Thanks, J Bur! And good luck with the raffle!