Give that Hero a Cat. Heroes Love Cats.

Blurb for The Dimple of Doom:

It may sound like common sense, but never hump an art thief. Turns out, Samantha Lytton’s Common-Sense-O-Meter is super duper broken.

Failed actress Samantha Lytton is getting along just fine in her lonely little life when a charming criminal called Sam or Nate or maybe even Richmond kisses her, square dances most provocatively, opens his not-so-wicked heart, and gets her in trouble with not one, but two international art theft rings as well as the LAPD.

She’s either gonna end up in jail or famous.  Maybe both.

Along the way, she fights for her life and falls for this funny, sexy disaster of a man... and learns that finding happily ever after with yourself is the first step to real contentment. A cute dimple is just the second. 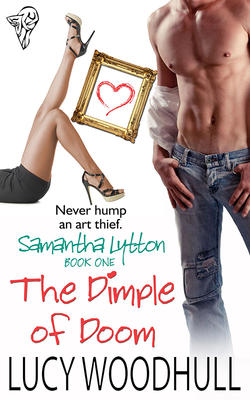 I write romantic comedies, and I've found that a funny book is a great place to secretly subvert gender norms.  While you're laughing at and/or with my heroine Samantha Lytton in The Dimple of Doom, I'm busy trying to change up the status quo because I'm rabble-rousey like that.  Most romances, if they feature animals, give a dog to the dude (dogs are loyal! and manly!) or a cat to the lady (cat ladies die alone lol -- amIrite?)  Everything in our society is relegated to a gender norm -- boys play with trucks and girls play with pink... everything.  They make stupid pens for her.  Boys are taught to be powerful, while girls, to be pretty.  And cats -- well... cats are wussy animals that a real man wouldn't touch with a ten foot pole with a feather on the end.

So what did I do?  I gave my mysterious, uber-cool, religiously single, art thief anti-hero a cat.  And he doesn't just endure the presence of the cat; he cuddles and squeezes and loves on that cat in a way that would make the average person barf:

Excerpt from The Dimple of Doom

Nate hadn’t meowed at me. I followed the plaintive tones of feline dissatisfaction to find a tiny black cat sitting at his feet. Nate scooped the little fluff ball into his arms, stuck his face in the cat’s neck and proceeded to croon a disgusting array of loving goo-goos. The cat seemed unmoved by the display.

I could not say the same for myself.

My normally surly criminal friend didn’t seem to realise he’d turned into a six-year-old. “My dear Captain Taco, this is Samantha.” Don’t think I failed to realise he introduced the cat to me and not the other way around. My ranking in the household was painfully obvious.

Captain Taco licked his nose and yawned, settling back into the crook of Nate’s arm, belly and legs up like a sumptuous pasha. I’d never had a boyfriend squish such unbridled fondness all over me, and this cat looked bored.

Now you might ask:  Why am I so interested in switching up gender norms?  I think romance does this all the time.  Modern romance authors put the heroine first:  her story, her growth, her sexual evolution and enjoyment.  This is such a new concept!  Sad, but true, it's still a controversy -- women taking control of their lives and sexual desires and demanding equality in the relationships they pursue.  So, in my books, I might make that powerful police officer a woman... on purpose.  The doctor.  The attorney.  Heck, the cleverest criminal in The Dimple of Doom is a woman -- a badass middle-aged woman when most older ladies in books, TV, and film are regulated to the kindly grandma role.  My Jane is not kindly.  Her stare will cut you down from fifty feet away.

I recently chatted with some writer buddies and told them that I was making conscious decisions to increase the presence of women in my books, and breaking gender stereotypes.  One of my female writer friends told me that she often defaults to male characters, only making them female when there needed to be a love interest.  Egad!  Women are still only love interests, even when written by women!  This is extremely common -- read some of the facts from the Geena Davis Institute on Gender in the Media:

Via TV, movies, and books, people (including women artists) are programmed to default to an antiquated way of thinking.  Let's change that up!  I figure if I'm a writer, then I can create the ideal world as I see it, and dammit, I see women astronauts and hot dudes with "girly" animals like cats.  Challenging the preconceived notions of "man" is important.  My husband and I have a cat, and he loves that little devil to death.  The world often tells men that being macho and uncaring is the way to be a "man," but so many wonderful males of the species experience actual *gasp* feelings like love and respect.  Who'da thunk it?  Erasing gender norms shows respect not only for women (we're actual people!) but for men as well.  If I were a modern man, I'd get pretty tired of being told I'm a hairy thug who's only capable of swilling beer and regurgitating "make me a sandwich" jokes.  "Ladies are excellent at swilling beer, too," said the author with a burp.  And men love their furry widdle cats, dammit.

I highly encourage all of you to notice the ratio of men to women in the media your consume.  Read books that challenge the status quo.  Pay money for movies that feature women and people of color in leading roles.  And, if you're a writer, twist-up those notions of gender and race.  The world will be a more beautiful, and accepting, place for it.

And get a cat.  Cats are freaking awesome.  When they're not barfing on your duvet.

My latest, The Dimple of Doom, is available from:  Total-E-Bound, Amazon, AllRomance.com, B&N, Sony.  (For iBook users, buy from T-E-B and choose ePub format.)

Blurb:  Failed actress Samantha Lytton is getting along just fine in her lonely little life when a charming criminal called Sam or Nate or maybe even Richmond kisses her, square dances most provocatively, opens his not-so-wicked heart, and gets her in trouble with not one, but two international art theft rings as well as the LAPD. She’s either gonna end up in jail or famous. Maybe both.

If you like funny sci-fi, I invite you to try the adventures of Ragnar and Juliet:  Juliet is a bounty hunter with a penchant for pie, himbos, and shopping at Sluts ‘R’ Us. Ragnar is a sweet, hunky alien dude who’s wanted by one seriously assy emperor. She’s totally going to turn him over to King Jerkface… if she can stop falling for him. And his surprisingly-sexy tail. Or maybe she’ll just overthrow the government of a planet in order to rescue hundreds of unwilling concubines. Yeah — definitely the latter.  Amazon.com, Liquid Silver Books, B&N, AllRomance.com, iTunes, Sony.

Thanks for reading! Comment below for a chance to win a copy of The Dimple of Doom!

I love romantic comedy and I also love when men get all silly over animals. It shows they have a heart! Cute excerpt.

Whoops! It's early. Here's my email address: naomibellina AT live.com

The statistics you give are quite intriguing. Women are making in roads everywhere but it is very slow. When I watch British TV, their women are much more realistic. I have a cat and my kids have cats. My mother recently died and my brother took one of her cats. It is the first pet he has had on his own. He dotes on him.
debby236 at gmail dot com

I've actually stopped reading most M/F romance because of the stereotypical women. Your books might just change my mind! I love SF and have a degree in art history!

I love cats! Your book sounds wonderful... I enjoy how humor adds so much more to a character and their book. Thank you so much for sharing with us today! :)
greenshamrock AT cox DOT net

Romantic comedies are my favorite but it's hard to find good ones. This sounds like a great, fun read!

I love a good romantic comedy!

That sounds like a great story! I am going to have to check it out!

GOTTA TO HAVE HFA!!

Terrific post Lucy!
Romantic Comedy is one the hardest to write (I think as a fellow author) Good for you, Dimple of Doom sounds great!

All the best,
Kate

I was really surprised that men out number women in family films, but then I started thinking about them. Still hard to believe though. And they're always the ones driving the car too.

Cats are freakin' awesome except when they try to wake you up at 5 a.m. so you can perform your official job as the "Can Opener".

Yay for subversive rabble-rousey romance writers! And I've always thought there are not enough heroes with cats! :D

THANLS FOR THE GIVEAWAY!