An Interview with Gregory Delaurentis

I'm hosting author Gregory Delaurentis today, as part of his tour for the first book in his noir saga, Cover of Darkness.

Welcome to Beyond Romance, Gregory!  I'm sure that other people ask you the same old questions - what got you started writing, where'd you get the idea for your book, and  so on. So let's try some off the wall questions instead.


Tell me, have you ever broken any bones?

Well, if you call shattering both kneecaps breaking bones well then yes. When I was a kid I was given a skateboard for Christmas and I was all too excited to ride it everywhere on the New York streets. However if you’ve ever rode a skateboard across concrete or tarmac you’ll quickly realize that if you hit a large enough pebble or rock it will stop the forward momentum of your skateboard cold and send you flying forward. I used to choose the steepest of streets to skate down and a number of times I struck stones that sent me flying onto my hands and knees, leaving abrasions on my palms and shattering both kneecaps in time.

I have to be honest and admit that I'd never attempt riding a skateboard. I broke my leg last year just walking along an ordinary sidewalk.
Are there any weird things you do when you’re alone?

Exist with several other imaginary beings. Actually, they are characters in my own stories. I question them as to their motivation. I argue with them about their current actions. I quiz them as to what they are really thinking. I try to get to the bottom of any animosities between characters or illicit love affairs between two people. I work out details of their backstories or get into their deepest, darkest secrets. I guess if you do that enough you can call that pretty weird.

What is your favorite quote and why?

“Turning and turning in the widening gyre
The falcon cannot hear the falconer;
Things fall apart; the centre cannot hold;
Mere anarchy is loosed upon the world,
The blood-dimmed tide is loosed, and everywhere
The ceremony of innocence is drowned;
The best lack all conviction, while the worst
Are full of passionate intensity”
THE SECOND COMING, William Butler Yeats (1865-1939)


It makes me think of when all things come to an end. The funny thing is that in one lifetime, you will feel this way several times, and no matter how bad the world can turn, and no matter how devastating a thing is, especially life, it is survivable.

Actually, I agree - especially French vanilla, the creamier the better.

Since this is a promotional post, after all, I'll ask at least one writing related question. What have you got coming soon for us to look out for?


I guess I need to introduce my readers to your characters in order for this to make sense. So let me share your blurb and an excerpt from Cover of Darkness.

A high profile murder of a Wall Street executive in Westchester pits three people against the criminal underbelly of Manhattan nightlife. The key players are two ex-cops turned private investigators—Kevin Whitehouse, whose sharpest tool is his keen analytical mind, and David Allerton, a former Special Forces operative—and Margaret Alexander, Kevin’s lover. In their search for a killer, they are forced to travel to the edge of sanity and morality, while stumbling onto their own confusing secrets as well. The Cover of Darkness is a gritty noir saga that untangles a web of deceit in the course of tracking down a brutal murderer. 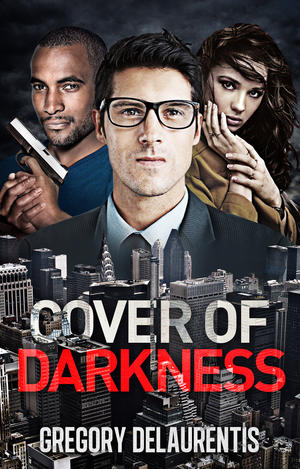 David first opened the door to a closet on the left, searching it with the gun muzzle, before approaching the door at the end of the hall and kicking it open. An angry, naked man stood on the other side, his anger changing to fear in seconds once he beheld the gun pointing in his direction.

“Get back into bed,” David ordered.

The pale-bodied man responded as he staggered backward. The foot of the bed struck the back of his knees, sending him seated on the mattress. The woman on the bed had by this time covered herself with the sheets, and curled her legs up.

While Kevin stood nervously in the doorway, David searched the room and the closets, the muzzle of the shotgun again serving as a probe, but found no one.

“What the…?” Chase asked David.

After searching through the room, David tossed the shotgun to Kevin.

Suddenly, Chase went white-hot heat, crawling backward into the arms of his woman in sheer panic screaming, “What do you want?!”

“I want information,” David demanded, going to the foot of the bed, standing before them with Kevin directly behind him. “I want to know who whacked Osterman.”

“How am I to know?!” Chase shouted back. His hair was a wild tangle, his eyes wide as saucers with fright.

“Don’t yell at me,” David said calmly. “I want answers. I’m not interested in killing you.”

“You bust into my crib and start throwing guns around. You’re crazy, man, what do you think I’m thinking?”

“Osterman! He jerked me.”

“So, you had one of your soul brothers do him in.”

“Oh hell, no. My people don’t kill. We don’t mess with weapons like you do.”

“And the reason for that?”

“Don’t worry about what I am,” David growled back. “You are moving weight. I want to know what happened after Osterman jerked you.”

“That’s all? You didn’t go to the Colombians? Liar!”

“Yes, yes, I did that!” Chase corrected. “I went to the Colombians as soon as I knew he jerked me. I begged them to give me another chance. They said they would, if I replaced their one hundred kilos. One hundred kilos! How do I do that?”

“Put bullets into Osterman for revenge.”

“How is that going to get me my one hundred kilos?”

“Let me explain it to you, genius. The Colombians trust Osterman enough to give him a heavy shipment. You find it, whack him, and take his shipment back to the Colombians. Paid in full.”
Chase thought that over for a second or two. “But that’s not what happened.”

The word “Freeze!” were suddenly heard from the doorway. David frowned as he glanced over his shoulder to see a scruffy looking black male, armed with his own shotgun.

Get your copy of Cover of Darkness today:

Gregory Delaurentis spent his adult life roaming from job to job, working for Lockheed in California, various law firms in New York, and financial firms on Wall Street. Throughout this period of time, he was writing—unceasingly—finally producing a large body of work, albeit unrecognized and unpublished . . . until now. Cover of Darkness is the first in a series of upcoming books that include Edge of Darkness, Pale of Darkness and Cries of Darkness. These novels follow the lives of three individuals who do battle bringing criminals to justice, while they struggle to understand the complex relationships that exist among themselves. This intriguing trio has absorbed the attention of Mr. Delaurentis for the past year and a half, so much so he decided to self-publish their stories to bring them to a wider audience. [AUTHOR’S DISCLAIMER: These are works of fiction. Name, characters, places, and incidents either are the product of the author’s imagination or are used fictitiously. Any resemblance to actual persons, living or dead, events, or locales is entirely coincidental.]

By the way, Gregory is giving away a $50 bookstore gift certificate to one person who comments during his tour. For a full list of his tour dates and locations, go to:

To enter Gregory's giveaway, please use the Rafflecopter link below.

Thank you for hosting today. Remember to comment and then complete the Rafflecopter to enter. Thanks!

I would like to take this opportunity to thank Lisabet Sarai for featuring my book on her blog and to thank everyone that participates by commenting. Have a great day.

Good luck with the new series!

As former cops and one with a special forces background, I'm sure Kevin and David are strong, assured characters. What more can you tell us about Margaret? Is she a kick ass character or does she provide some other aspect to the story?

Thanks for being my guest and sharing a bit about yourself. Sorry I wasn't here to greet you sooner!

Wishing you great luck with the series.

I enjoyed the interview, thank you.

OUCH...both kneecaps crushed! Did you get back up on that skateboard after your knees healed? I guess that tops getting gravel imbedded in your knees when falling off a bike on a gravel road or sliding off a curb and breaking a bone in your foot...right? Thanks for this interview.

Thanks for the excerpt. Now I want to read the rest of the story. The premise for it sounds intriguing. I have added it to my TBR list.
JWIsley(at)aol(dot)com

Very fun interview (though now my knees hurt in sympathy)!

Thanks for sharing the great interview and the giveaway. Sounds like a great book and I love the cover. evamillien at gmail dot com

OMG. I can't wait to read the whole book. i told the wife and she is just as excited

I remember skate boarding in my youth far ago in the mists of time. I really hated it when a tiny pebble could stop the whole shebang and I'd go flying forward, so I know exactly what you mean.

Oops, forgot to mention I'd like the Amazon GC if I win, thanks!

Yes, the male characters can be a bit strong, but Margaret holds her own in the soup of three, especially with the cantankerous David Allerton who can be very rough at times. And with that, she is the watchful, careful eye for Kevin Whitehouse, who gets in dangerous trouble at times. If these two men are strong and assured, she is most definitely the glue and the force behind the two of them. Thank you Anne for the question.

Thank you very much Ms. Sarai. You indeed have a wonderful and very professional looking blog site.

Thank you for dropping by and commenting Rita. I enjoy having you on the tour.

OH Karen H, I was so young, I overlooked pain for the sake of having fun with my friends. It's funny how when you are a kid you can almost break a bone and continue playing, and that's what I did. I jumped right back on the skateboard immediately and rode hard to the next fall. That's how one shattered, from repeated falls. Now that I'm much older, I hate it when it rains!

Thank you Dragon for your comment and have a great day!

Thank you joye, and I hope you enjoy it. Have a great day.

ha ha ha, thank you so much Trix, and thank you for being on the tour with me.

Thank you Wolfy, and I also hope you enjoy it. Have a great day.

I would like to thank you all for commenting and I look forward to more questions and to seeing you further in the tour. Have a great day everyone.

HI GREG, I CAN'T WAIT TO READ YOUR BOOK BUT YOU MUST MUST TRY BUTTER PECAN! LOL

Hello hotcha12. I hope you enjoy it, and yeah, I'll try butter pecan icecream this week! Great to hear from you! Have an enjoyable weekend.

Great work. Can't wait for it to come out. Have a great time with it.

IF YOU HAVE SCHWAN DELIVERY, THEY'D THE BEST!!